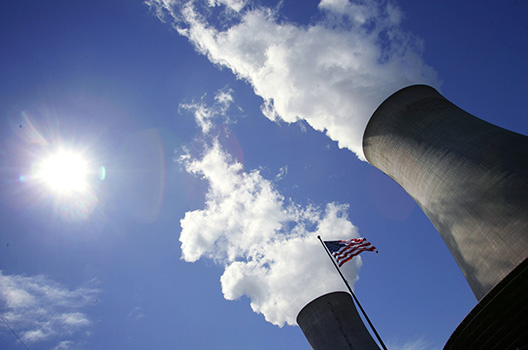 Throughout 2018, the Atlantic Council Global Energy Center convened a “Task Force on US Nuclear Energy Leadership,” which comprised civilian and military experts in foreign policy, defense, and nuclear energy. Senators Mike Crapo (R-ID) and Sheldon Whitehouse (D-RI) served as honorary co-chairs of the Task Force. This report, entitled “US Nuclear Energy Leadership: Innovation and the Strategic Global Challenge,” is the result of these efforts.

The Task Force found that a flourishing domestic nuclear energy sector is critical to US national security, both in the interconnections between military and civilian uses of nuclear energy, as well as in foreign policy. This report recommends maintaining and expanding the current nuclear fleet; creating a conducive regulatory environment for innovation and new technologies; and encouraging and facilitating nuclear energy exports.

Image: A US flag flutters in front of cooling towers at the Limerick Generating Station in Pottstown, Pennsylvania, on May 24, 2006. US President George W. Bush briefly toured the nuclear facility and spoke about energy and the economy when this photograph was taken. REUTERS/Kevin Lamarque