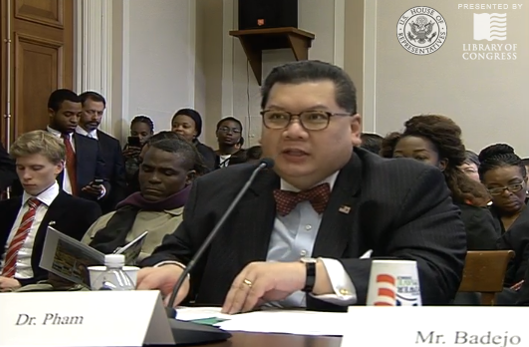 J. Peter Pham, Director of the Atlantic Council’s Africa Center, testified at a House of Representatives Committee on Foreign Affairs hearing on “Nigeria on the Brink?”

Nigeria is Africa’s most populous country and largest economy, and as such its upcoming national election—set for mid-February—demands the United States’ attention, particularly because, as Pham noted, the polls will be “perhaps the most competitive presidential race since the transition from military to civilian rule in 1999.”

The elections, Pham said, take place in the context of a “perfect storm” of challenges: “the continuing insurgent activity of Boko Haram in the extreme northeastern part of Nigeria and its terrorist attacks beyond that region to other parts of Nigeria as well as neighboring countries; humanitarian challenges, not least of which are the hundreds of thousands who have been displaced because of the conflict; and economic pressures, top amongst which is the impact of declining oil prices on the national budget” and, thus, resources available to deal with these same concerns.

Pham concluded his remarks to the Congressional panel by appealing to Nigeria’s friends “for the sake of Nigeria, its neighbors, and their own self-interests in a secure and prosperous Africa…to do everything in their power to stand by the people of Nigeria as the latter queue up to cast ballots for the future they would choose for themselves and their children.”

Also testifying at the hearing, organized by the Subcommittee on Africa, Global Health, Global Human Rights, and International Organizations, were the Honorable Robert P. Jackson, Principal Deputy Assistant Secretary of State for the Bureau of African Affairs; Jadegoke Adebonajo Badejo, Principal Partner at Bonajo Badejo & Co.; Emmanuel Ogebe, Manager of the Justice for Jos Project; and Chris Fomunyoh, Senior Associate and Regional Director for Central and West Africa at the National Democratic Institute.