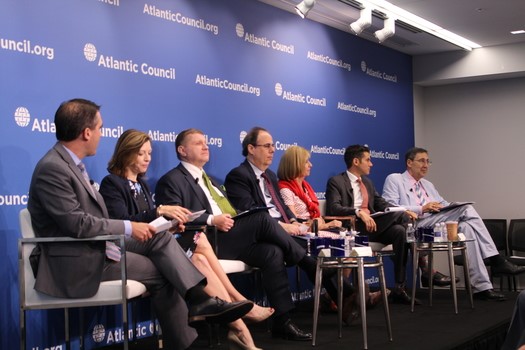 On June 20, the Eurasia Center and the Adrienne Arsht Latin America Center co-hosted a private strategy breakfast on Russian influence in Venezuela, followed by a public event, Russian Influence in Venezuela: What Should the United States Do? The private strategy session included senior US government and foreign officials. The public event focused on the extent of Kremlin involvement in Venezuela, Moscow’s motivations and possible next moves, and how the United States should react. This event featured keynote remarks by Senator Rick Scott, through which he expressed the need for immediate action by the United States and the international community to address the ongoing humanitarian, economic and political crisis in Venezuela. Following Senator Scott’s remarks, Jason Marczak, director of the Adrienne Arsht Latin America Center, moderated a diverse expert panel. Speakers included Atlantic Council board member Ambassador Paula J. Dobriansky, Ambassador John Herbst, director of the Eurasia Center, Konstantin von Eggert, a Russian journalist for Deutsche Welle, Mark Simakovsky, senior fellow for the Eurasia Center, and Francisco Monaldi, director of the Latin America Initiative at Rice University’s Baker Institute for Public Policy.