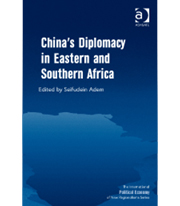 Atlantic Council Africa Center Director J. Peter Pham contributed a chapter about the Chinese navy’s recent activity in Africa to a just-released book on China’s Diplomacy in Eastern and Southern Africa. Pham wrote the chapter on “China’s Somali Piracy Deployment: Strategic Context and Implications” for the volume edited by Seifudein Adem, associate director of the Institute of Global Cultural Studies at Binghamton University.

According to Pham, while the mission of the fifteen People’s Liberation Army Navy (PLAN) task forces to date is to offer protection to Chinese and other merchant vessels passing through waters rendered dangerous by Somali pirates, the unprecedented deployment also had the strategic effects of burnishing the international image of the People’s Republic of China as a contributor to international security and giving the PLAN a platform to hone its expeditionary capacity, especially in Africa, where the Chinese have considerable political and economic interests. The study examines the calculus behind Beijing’s decision to send its warships on the anti-piracy mission, the political and strategic relevance of the deployment, its actual tactical and operational conduct, and the resulting implications for both African countries and outside powers, including the United States. It also looks at the PLAN’s new capabilities in relation to those which the land army has developed through its now decade-long experience with United Nations peacekeeping operations in Africa.