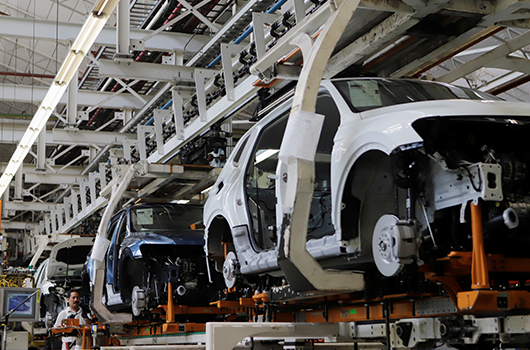 On June 25, 2020, the Atlantic Council’s Adrienne Arsht Latin America Center in partnership with the Monterrey Chapter of the American Chamber of Commerce of Mexico (AmCham Monterrey) held a public conversation on the implementation of the United States-Mexico-Canada-Agreement (USMCA), that will come into force on July 1.

Secretary Márquez initially addressed the importance of the new agreement and emphasized the benefits that it will bring to the region. From her perspective, Mexico will leverage its economic complexity to strengthen trade with the United States and Canada, fostering competitiveness across borders. After providing a historical perspective of the Mexican economy, she highlighted the North American Free Trade Agreement’s (NAFTA) positive effects on the country. Increasing exports, educational improvements, and a larger supply of highly skilled workers are concrete achievements of the regional integration scheme.

USMCA’s importance transcends North America. According to Secretary Márquez, roughly twenty percent of global foreign direct investments occur in the region. Regarding exports, intra-regional activity represents only fifteen percent of the total bloc’s exports. These three countries supply goods and services to markets across continents, with China and Germany as their most prominent partners. A wide variety of industries contribute to this intricate economic integration process. An example of economic integration is the fast growth of the aerospace industry in the US-Mexico border. Secretary Márquez pointed out that in 2017 the aerospace industry received more than $30 billion in investment in the border region.

The conversation also covered issues regarding COVID-19’s implications for trade. Secretary Márquez pointed out that the pandemic has added value to geography. From her perspective, businesses will seek to develop value chains that are less exposed to future disruptions. This is an opportunity for Mexico to attract investments from countries in Asia and other continents. Additionally, she mentioned that Mexico is fully committed to being a reliable trade partner for the US, especially for the manufacturing industry. For that reason, she confirmed that Mexican President, Andrés Manuel López Obrador, expects Prime Minister Trudeau, to join a trilateral meeting with President Donald J. Trump in Washington, DC, as a symbol of the region’s economic integration.

After Secretary’s Márquez intervention, Mr. Marczak introduced Mr. Gorbea and Mr. Rosenzweig. Mr. Gorbea provided the private sector’s perspective, emphasizing the importance of updating mechanisms on documentation, innovation, and technology that did not exist when NAFTA was designed. For the president of ADM Mexico, this is an opportunity to catch up with the improvements that businesses demand. Mr. Rosenzweig pointed out that the USMCA provides stronger mechanisms for intellectual property rights protection and clearer rules of origin. Both experts agreed on the important role of coordination by the three governments, particularly in the current COVID-19 context. From their perspective, the implementation of the USMCA will reduce inefficiencies and be beneficial for consumers across the region.

Mr. Marczak asked Secretary Márquez about the impact of the pandemic on the implementation of the new agreement and the specific mechanisms that the Mexican government has implemented to cope with COVID-19- related consequences on value chains across the border. She showed optimism for the future, expecting a significant recovery of the Mexican economy during the second semester of 2020, despite the bleak economic forecasts by international financial institutions, adding also that Mexico expects a one-figure contraction for the current year, significantly less than the recent International Monetary Fund (IMF) projections. She is confident about the coordination between the American and Mexican administrations, particularly around the protection of common economic activities in the automotive and aerospace industries, and other essential sectors.

As North America copes with the pandemic’s effects and the individual countries begin to reopen their economies, the USMCA becomes an incredibly valuable instrument for them.

Image: Cars are pictured in a production line at a company's assembly plant in Puebla, Mexico, July 10, 2019. REUTERS/Imelda Medina