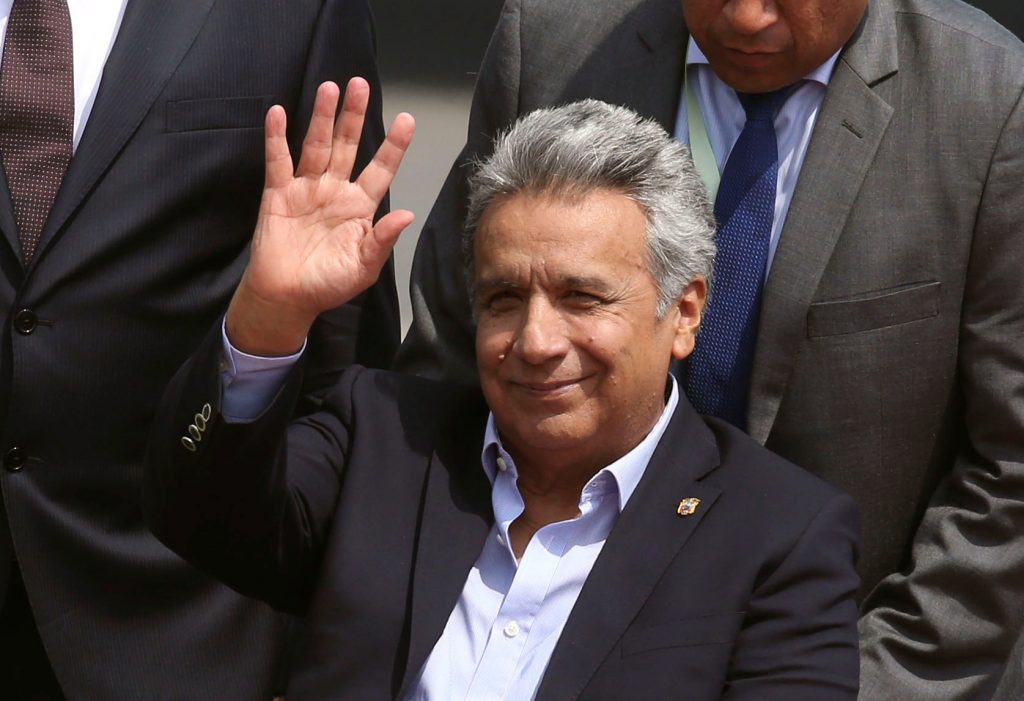 On February 13, 2020, the Atlantic Council’s Adrienne Arsht Latin America Center was honored to host His Excellency Lenín Moreno, Constitutional President of the Republic of Ecuador, to discuss the importance of the US-Ecuador relationship and what the future may hold for Ecuador.

Adrienne Arsht, executive vice chair of the Atlantic Council and founder of the Latin America Center, opened the event by highlighting the strength and duration of the US-Ecuador relationship and calling President Moreno’s visit the beginning of a new chapter. Arsht applauded President Moreno’s efforts to fight corruption, strengthen the economy, and build security initiatives. She then welcomed the president, who was joined on stage by Jason Marczak, director of the Adrienne Arsht Latin America Center.

President Moreno commented that Ecuador’s recent progress is particularly exciting given that the country, according to him, had been deteriorating to a level comparable to Venezuela. A paradise country, but with an illegal government. He took this opportunity to reaffirm Ecuador’s recognition of Juan Guaidó as the legitimate president of Venezuela. He acknowledged the complexity of the situation in Venezuela and urged Venezuelans to not forget what their country used to be. “They have to rescue themselves, but their success will require all of us supporting them and supporting the government.”

Another topic important to the President was open dialogue. According to him, no one is the “master of truth,” and we should all be open to have conversations where we can learn from others. President Moreno invited the audience to have an open dialogue with others and accept new opinions. “That is what this government is doing: searching for truth,” declared the President. He celebrated diversity – diversity of race, thought, language – and affirmed Ecuador as a place of diversity. “Equality,” he said, “is a paradigm. Equality would be boring. Ecuador is not a country of equality; but is a country of opportunity.”


Marczak thanked President Moreno for his comments and for his visit to the Atlantic Council, and welcomed Ambassador Ivonne Baki, Ecuador’s ambassador to the United States since January 2020, who arrived in Washington, DC last week. Marczak invited President Moreno to elaborate on his conversation with President Trump. President Moreno mentioned that international trust towards Ecuador has been re-established, resulting in the extension of credit and long-term loans. “The best way to make strides is on the shoulders of giants. We are appreciative of the support of the giant country of the United States.”

Recalling President Moreno’s earlier comments about Venezuela, Marczak asked the president for his thoughts on how to solve the crisis in Venezuela. President Moreno mentioned the Roldós Doctrine, which was introduced by Ecuadorian president Jaime Roldós Aguilera in 1980 and was signed by four other countries – Venezuela among them. The Doctrine agrees to protect democracy, stability, and human rights in the countries and allows for coordinated international intervention to protect those rights.


Addressing reforms within Ecuador, President Moreno first mentioned the gasoline subsidies. He shared his perspective that these subsidies support illegal gasoline markets and cocaine production. He said that dialogue with Ecuadorians will be crucial for future reforms and progress. He also mentioned technological advances as an area that needs updating and advancement in order to connect more Ecuadorians to the economy and to the world.

Marczak concluded the event by congratulating President Moreno for his work and expressed hope for the future.