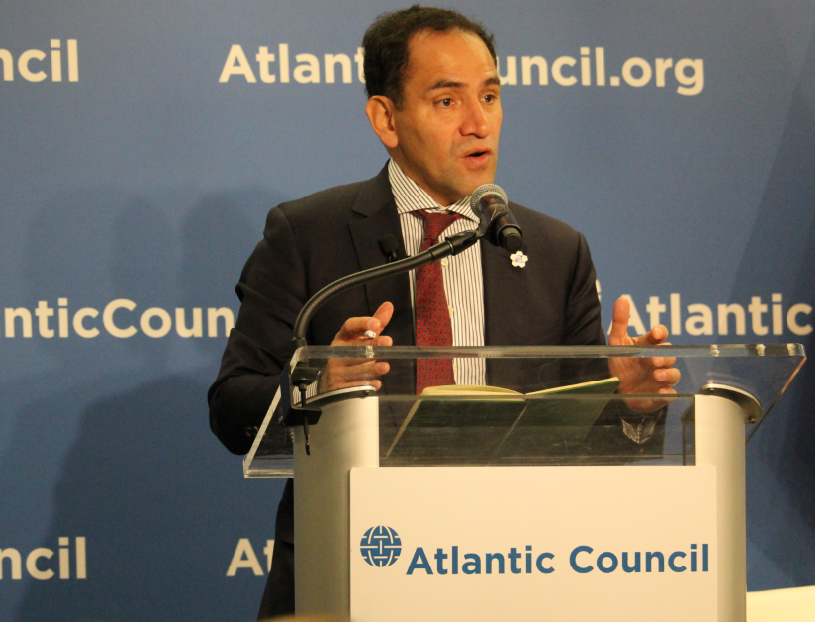 In his address, Herrera highlighted the unique characteristics of the Mexican economy. With one of the lowest public investment rates in Latin America, Mexico has experienced slower growth than its regional economic peers at 2.9 percent, as well as striking developmental disparities between different states. He identified the “relatively shallow” financial sector in the country as an opportunity for improvement. This sector has not seen any significant change in the number of firms for the last 25 years. He also pinpointed low tax collection as a result of reliance on oil revenue and low female participation in the labor force as key challenges for Mexico’s economy. “We have to grow faster, and we need to grow in a much more equitable way,” the secretary acknowledged.

When Labott and Cuellar joined the discussion, the topic changed to the week’s World Bank meetings, in which Herrera had participated. According to the secretary, a common theme across meetings was the concern sparked by trade tensions and the shift away from the traditional rules-based, multilateral setting. He highlighted the importance of interconnected economies, as exemplified by the US and Mexican automobile industry. “The Río Bravo/Rio Grande doesn’t divide us (…), but actually unites us as two countries in so many ways,” complimented Cuellar. The congressman pointed out that it is in US interest to have strong neighbors. He is optimistic the United States-Mexico-Canada Agreement (USMCA) will be finalized this year.

On USMCA, Labott inquired about the treaty’s effect on investor confidence. She alluded to the recent statement published by Mexico’s central bank, which states that policy uncertainty is holding back investments from the country. “The worst thing you can do to a business is to have them wondering what is going to happen today,” reasoned Cuellar. USMCA will provide certainty on the rules for trade with Mexico, “the fact that we will be able to anchor one piece of very clear certainty on a very specific region of the world (…) is going to help attract investments to the region,” concluded Herrera.

The conversation then shifted to the digital economy, which is Mexico’s fastest-growing sector, according to Herrera. The trend in digital economic growth presents opportunities, including community connectivity, but also challenges, such as the logistics of taxing transactions. Unlike other countries, Mexico does not have a digital tax, but is in the process of implementing a withholding tax, the secretary announced. Cuellar added that “Congress does not move as fast as the business sector, and we are trying to catch up.” He also pointed out that US investors are a vocal presence in the Mexican digital sector.

When asked about the increase in Chinese investments in Latin America, Congressman Cuellar noted that China has been paying more attention to the region and that the United States should increase its consideration of Latin America. “40 percent of everything we export as a country goes to Latin America (…), but we do not pay 40 percent of our time to Latin America,” he admitted. In response to Labott’s question on how the United States can step in to make up for China’s neglect of human development, Herrera noted the current role of international trade institutions. “Now they [International Monetary Fund, World Bank] are concerned about human development, gender equality, indigenous rights, the environment.”

Regarding US-Mexico collaboration in Central America, Herrera explained that the issues of the Northern Triangle are similar to those Southern Mexico is facing. He cited the need for concerted investments between all regional partners, especially in human capital and infrastructure.

At the end of the conversation, Secretary Herrera highlighted the global economic climate as well as gender equality. Acknowledging the need to prepare for the slowdown of economic cycles, Secretary Herrera addressed the current global economic climate— “this is taking nobody by surprise, but there is very little appetite for cooperation.” On gender equality, Herrera addressed the intersection of economic, social, and cultural factors in female participation in the economy, calling for a strengthening of programs to alleviate women’s caregiver roles and citing the economic potential of a larger, more qualified labor force.