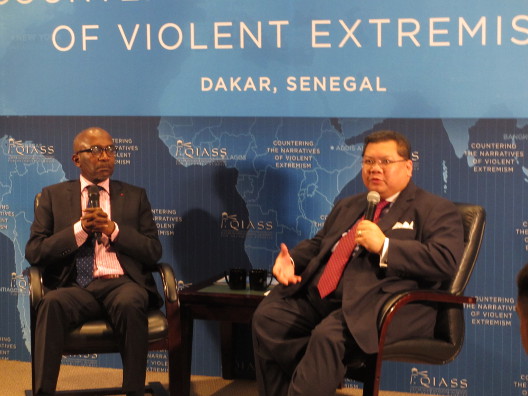 J. Peter Pham, director of the Atlantic Council’s Africa Center, was a featured speaker at a Global Town Hall on “Countering the Narratives of Violent Extremism” organized by the Qatar International Academy for Security Studies (QIASS) in conjunction with the release of the results of its yearlong worldwide investigation into countering violent extremism (CVE).

The event was held simultaneously in New York, Belfast, Dakar, and Singapore, and brought together political leaders, counterterrorism officials, and other experts from around the world to discuss the report and have a frank conversation about CVE tactics in the face of an evolving global threat picture.

The event opened with addresses by US Secretary of Homeland Security Janet Napolitano, Singaporean Deputy Prime Minister and Coordinating Minister for National Security Teo Chee Hean, First Minister of Northern Ireland Peter Robinson, Senegalese President Macky Sall, and the study’s leader, QIASS Executive Director Ali Soufan, a former FBI agent who investigated and supervised a series of high profile terrorism cases, from the bombing of the U.S.S. Cole to the aftermath of 9/11.

Following the addresses, there was a global discussion moderated by Pulitzer Prize-winning author and journalist Lawrence Wright, during which Pham, the featured panelist speaking from Dakar, Senegal, joined John Cohen, deputy counterterrorism coordinator at the US Department of Homeland Security, and Karen Greenberg, director of the Center on National Security at Fordham Law School, who spoke from New York; Stephen White, former head of mission for the European Union’s Rule of Law Mission for Iraq, and Matt Baggott, chief constable of the Police Service of Northern Ireland, who spoke from Belfast; and Susan Sim, former deputy chief of mission of Singapore in Washington, and Ustaz Mohamed bin Ali, secretary and counselor of the Religious Rehabilitation Group, who spoke from Singapore.

Africa Center Senior Fellow Rudolph Atallah was one of the twelve experts who participated in the preparation of the QIASS study.

QIASS is a Doha-based professional institute serving to raise security standards, knowledge, and cooperation within the Gulf region and across the world.