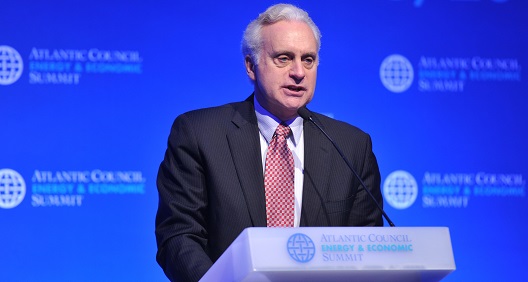 WASHINGTON – The Atlantic Council today named one of the United States’ most accomplished diplomats, Francis J. Ricciardone, Jr., as a vice president and director of its Rafik Hariri Center for the Middle East. Ricciardone, who currently serves as the US ambassador to Turkey, will join the Council in September.

“At a crucial moment in the history of the Middle East, Ambassador Ricciardone brings to the Atlantic Council rich leadership experience from some of the world’s most demanding places,” said Frederick Kempe, president and CEO of the Atlantic Council.

During his Foreign Service career spanning more than thirty-six years, Ricciardone has served as ambassador also to Egypt and to the Philippines and Palau. With nearly a decade of experience in Egypt and another in Turkey, added to his years in Iran and Afghanistan, Ricciardone brings broad perspective on the larger region’s contemporary events and modern history. He speaks Arabic, Turkish, French, and Italian.

Ricciardone is known for taking on leadership roles in critical global affairs challenges and emergencies. Secretary of State Hillary Clinton called him back to the Service from the US Institute of Peace at the outset of the Obama administration to take charge of the US Embassy in Afghanistan for the civilian and military surge. Secretary Madeleine Albright pulled him from Ankara to work with the Iraqi opposition to Saddam Hussein as Special Coordinator for the Transition of Iraq. Secretary Colin Powell appointed him to lead the Department of State’s post-9/11 Task Force on the Coalition Against Terrorism, and later pulled Ricciardone from Manila to organize the new US Embassy in Baghdad to replace the Coalition Provisional Authority. He has served in two multinational military deployments, working with Egyptian and Israeli forces at the border in Egypt’s Sinai Desert, and as political advisor to US and Turkish generals commanding operations in northern Iraq. He established new policies and tactics for a civilian-military, whole-of-government counterterrorism strategy in the Philippines that enabled diplomacy and democratic politics to advance and to succeed a decade later.

The Atlantic Council launched the Hariri Center in 2011 as a living memorial to Rafik Hariri, the former Lebanese prime minister who was brutally assassinated in 2005. In just three years of operation, the Hariri Center has become one of the leading institutions addressing the issues of the Middle East’s current transitions and upheavals. Its experts are regularly called upon by government officials, legislators, and media.

Bahaa Hariri, the center’s founder and chairman of its advisory council, said, “In Ambassador Ricciardone, we have found someone with the skills, maturity, and wisdom to further build upon the legacy of Rafik Hariri, who devoted himself to fostering a peaceful, prosperous, and democratic Middle East and North Africa with deep and enduring links to the United States and Europe.”

Ricciardone will support and speak at the Atlantic Council Energy and Economic Summit in Istanbul on November 20-21. Danya Greenfield will serve as acting director through September, and then will return to her position as deputy director to Ricciardone.