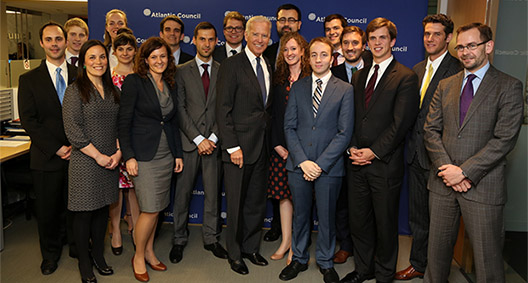 WASHINGTON – The Atlantic Council—in collaboration with the British Government, NATO, the Atlantic Treaty Association, and the Atlantic Council of the UK—will organize a future leaders summit on the margins of the NATO Summit in Wales on September 4-5, 2014. British Ambassador Sir Peter Westmacott made official on Tuesday the British government’s invitation for the Atlantic Council to lead the future leaders summit at the Council’s Toward a Europe Whole and Free conference, capping the first day of a conference that included speeches by Vice President Joe Biden, Secretary of State John Kerry, and European Commission President José Manuel Barroso.

Building on successful future leaders events that the Atlantic Council has organized at five past NATO Summits, the future leaders summit will open the high-level discussions at the NATO Summit in Wales to the next generation of Alliance leaders. The Atlantic Council is working with NATO in the run-up to the summit and has convened a working group of fifteen exceptional emerging leaders at the request of NATO Secretary General Anders Fogh Rasmussen. Additional information about the future leaders summit will be released later this spring.

The members of the NATO Emerging Leaders Working Group on the Transatlantic Bond are:

Working group members are participating in their personal capacity and the views expressed in woking group publications do not necessarily reflect the views of their employers or institutions.