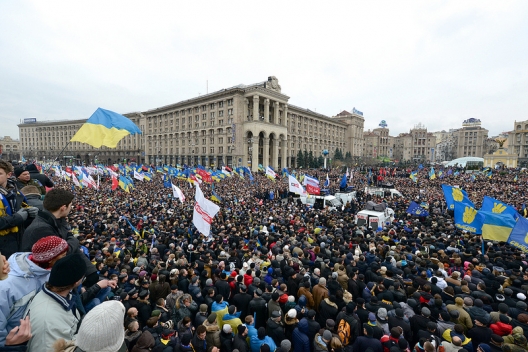 Ukraine, a nation of 46 million people, bordering four European Union countries—Poland, Slovakia, Hungary, and Romania—stands at a pivotal moment in history as it chooses between the East and the West.  AT the Vilnius Summit Ukrainian President Viktor Yanukovych announced that he was not going to sign an Association Agreement for far-reaching political and trade agreements with the European Union and would instead pursue agreements with the Russian-led customs union. In reaction to Yanukovych’s decision to reject further European integration, protestors filled a landmark plaza in Kyiv, the capital, and marched on government buildings urging the country to turn back towards the West. Ukraine is in an increasingly critical economic crisis and is in desperate need of economic aid. Economic challenges have forced Ukraine to make the weighty decision between moving forward with hard-hitting economic and political reforms required for EU integration as well as risk economic retaliation from Russia or choose to stay with the Russian-led customs union, forgo reforms, and turn away from greater European integration.

Eastern Partnership Program (EaP): The Eastern Partnership, an initiative launched by the EU in 2009, appears to fall short as four of the six participating countries have distanced themselves from the EU. Belarus, often referred to as Europe’s last dictatorship, is a special case. Azerbaijan doesn’t want to engage in forms of cooperation which would touch upon human rights, and Armenia turned its back on EU association, choosing instead the Russia-led Customs Union. Ukraine is the latest to reject the opportunity to sign the EU Association Agreement. Moldova and Georgia are the remaining EaP countries still seeking EU integration.
Vilnius Summit: The EU conference for the Eastern Partnership program held November 28-29 in Vilnius, Lithuania. Ukraine President Yanukovych refused to sign the Association Agreement and instead offered a trilateral trade agreement with Russia that was rejected by EU Commission President José Manuel Barroso and EU Council President Van Rompuy.

President Viktor Yanukovych has been president of Ukraine since early 2010.
Prime Minister Mykola Azarov was appointed prime ,inister of Ukraine in March 2010.
Vitaliy Klitschko, the leader of the opposition UDAR party and member of the Ukraine Parliament.
Nikolai Katerinchuk, opposition lawmaker from the Batkivshcina (Fatherland) party, called for “total mobilization” by hundreds of thousands of demonstrators in and around Kyiv’s Independence Square in order to control the city supporting EU Association Accords.
Catherine Ashton, a British Labour politician, high representative of foreign affairs and security policy for the European Union since 2009.
Victoria Nuland is assistant secretary of state for european and eurasian affairs at the United States Department of State.

July 29: Russia halts imports of chocolate from one of Ukraine’s main confectionary makers, Roshen, saying its products fall below safety standards. This and subsequent Russian restrictions on Ukrainian products is seen as retaliation for Ukraine’s efforts to integrate further with the EU. Russia asked Belarus and Kazakhstan, as members of its Customs Union, to ban Roshen’s products as well. Belarus has already announced it will not allow confectionery manufactured by Roshen to cross its territory.
August 13-14: Russian officials began demanding that commercial trucks leaving Ukraine for Russia be completely unloaded, inspected item by item, and then reloaded. Russian officials also began seizing and questioning the authenticity of documentation. According to the Ukrainian Employers Union, a trade association that represents many of Ukraine’s largest exporters, border officials said Moscow has declared all goods from Ukraine to be “high risk.”
September 22: Russian presidential adviser, Sergei Glazyev, warned that tariffs and trade checks that Russia would impose after Ukraine signed a deal with the EU could cost Ukraine billions of dollars and could result in a default.
November 20: Russian Prime Minster Dmitry Medvedev told Ukrainian Prime Minister Mykola Azarov at a regional meeting in St. Petersburg Ukraine would risk the Russia-led customs union imposing tariffs on its goods if it signs the EU free-trade accord.
Thursday, November 21: President Yanukovych announced that it had suspended its plans to sign a far-reaching political and trade agreement with the European union  to instead pursue new partnerships with former Soviet States Russia’s customs union with Belarus and Kazakhstan.
Friday, November 22: Protests began in response to Mr. Yanukovych’s decision to not sign the EU Association Agreements. The protestors occupied Independence Square, a landmark plaza in Kiev, and setting barricades. Protestors also controlled the large Trade Unions buildings and City Hall.
November 28-29: At the Vilnius Summit, Yanukovych suggested a trilateral trade agreement offer that would include the EU, Russia, and Ukraine. EU Commission president Jose Manuel Barroso said the EU was not interested in such trilateral discussions. Ukraine refused to sign the Association Agreement.
Monday, December 2: Russia purportedly offers cheaper natural gas and financial loans to Ukraine if the government decides to join the Russian-led custom’s block. Russia supplies nearly 60 percent of Ukraine’s natural gas.
Tuesday, December 3: The Ukrainian Parliament defeated a measure calling for resignation of Prime Minister Mykola Azarov and his government. The failure of the no-confidence vote pushed the battle for the future of Ukraine back onto the streets, where demonstrators and allied political opposition leaders say they would not relent until they succeeded in removing the government, including President Yanukovych.
Before Parliament voted on the measure, Azarov apologized for the use of force against protestors.
Friday, December 6: Yanukovych and Putin held brief talks in Sochi after Yanukovych made an official visit to China.
Sunday, December 8: Demonstrators in Kyiv have toppled a statue of the Soviet Union founder, Vladimir Lenin. Correspondents reported that more than 100,000 demonstrators had swarmed into the neighborhood that includes the parliament, presidential administration, and government headquarters in an attempt to blockade the area.
Monday, December 9: Riot police begin dismantling protestor barricades that have been blocking access to government buildings.
December 10-11: Western Diplomats including Assistant Secretary of State Victoria Nuland and the European Union Foreign Policy Chief, Catherine Ashton make their way to Kyiv for talks with President Yanukovych. Meanwhile, riot police attempt at clearing protestors from Independence Square and City Hall. Security forces appeared to pull out early in the morning. The interior minister, Vitaliy Zakharchenko, issued a statement saying the overnight crackdown had been needed to ease traffic congestion and promised that there would be no dispersal of the protesters in the square.
December 11: “Roundtable” talks aimed at defusing the political crisis in the country were held in Kyiv, but opposition leaders did not take part. The talks were proposed by former Ukrainian President Leonid Kravchuk and backed by Yanukovych.
December 12:  EU Foreign Policy Chief, Catherine Ashton announces that during her meeting with Yanukovych, the President assured her that Ukraine aims to sign an EU agreement and is concerned about short term economic challenges.