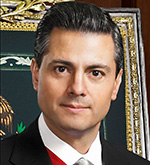 The Constitutional President of Mexico, Enrique Peña Nieto, joined public service at an early age, occupying several positions in the government of the State of Mexico. From 2000 to 2002, he was secretary of administration and from 2003 to 2004, he was elected representative of the 13th District in the 65th Session of the State of Mexico, where he was coordinator of the Parliamentary Group of the Institutional Revolutionary Party.

In 2005, Peña Nieto ran for the governorship of the State of Mexico. During his campaign, he toured the state, listening to people and signing commitments before a notary, ranging from remodeling clinics and schools to building roads and hospitals. After a successful campaign, he was elected governor of the State of Mexico and served from September 2005 to September 2011.

During his term as governor, Peña Nieto achieved significant progress in infrastructure and public services, particularly in health. He restructured finances in the State of Mexico, reducing public debt and increasing expenditure targeting works and programs, without the need to increase taxes.

In 2011, at the end of his term as governor, Peña Nieto expressed his hopes of running for the presidency. After an intense electoral campaign, characterized by the signing of national and state commitments, he won the elections on July 1, 2012. He assumed office on December 1, 2012.

Peña Nieto holds a BA in law from the Universidad Panamericana and an MA in business administration from the Instituto Tecnológico de Estudios Superiores de Monterrey (ITESM).