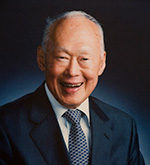 Lee Kuan Yew was born in Singapore in 1923. He was educated at Raffles College, Singapore and Fitzwilliam College, Cambridge, England. He was called to the Bar at Middle Temple in London in 1950 and practised law in Singapore. He was an adviser of several trade unions. In 1954, he was a founder of the People’s Action Party and was secretary general until 1992. In 1959, he became prime minister of Singapore and served successive terms until he resigned in November 1990, when he was appointed senior minister by Prime Minister Goh Chok Tong. He was reappointed after the 1991, 1997 and 2001 general elections. He was appointed minister mentor by Prime Minister Lee Hsien Loong in August 2004, and was reappointed after the 2006 general elections. He stepped down as in May 2011, and is currently senior advisor to the GIC Private Limited.