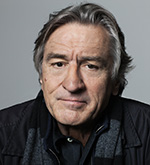 Robert De Niro is an American actor, director, and producer. He launched his prolific motion picture career in Brian De Palma’s The Wedding Party in 1969. He won his first Academy Award in 1974 for best supporting actor for his portrayal of the young Vito Corleone in The Godfather, Part II. In 1980, he was honored with a second Academy Award for best actor for playing Jake La Motta in Martin Scorsese’s Raging Bull. From Travis Bickle in Scorsese’s Taxi Driver and a Vietnam vet in Michael Cimino’s The Deer Hunter to a catatonic patient brought to life in Penny Marshall’s Awakenings and a father of a bipolar son in David O. Russell’s Silver Linings Playbook, De Niro’s authentic portrayal of his characters challenges people around the world to explore the complexity of the human condition.

De Niro takes pride in the development of his production company, Tribeca Productions, the Tribeca Film Center, which he founded with Jane Rosenthal in 1988, and the Tribeca Film Festival. The festival, which De Niro cofounded with Rosenthal and Craig Hatkoff in 2001 as a response to the attacks on the World Trade Center, was conceived to foster the economic and cultural revitalization of Lower Manhattan through an annual celebration of film, music, and culture. The festival’s mission is to promote New York City as a major filmmaking center and help filmmakers reach the broadest possible audiences.

Tribeca’s A Bronx Tale in 1993 marked De Niro’s directorial debut. He later directed and costarred in The Good Shepherd with Matt Damon and Angelina Jolie. Other Tribeca features include Thunderheart, Cape Fear, Mistress, Night and the City, The Night We Never Met, Faithful, Panther, Marvin’s Room, Wag the Dog, Analyze This, Flawless, The Adventures of Rocky and Bullwinkle, Meet the Parents, Fifteen Minutes, Showtime, Analyze That, and Meet the Fockers. In 1992, Tribeca TV was launched with the acclaimed series Tribeca. De Niro was one of the executive producers.

DeNiro devotes his time and support to philanthropic causes such as HIV/AIDS prevention and disaster relief. His lifetime of work and personal commitments epitomize the practice of artistry, humanity, and compassion—qualities at the heart of the transatlantic relationship and the conception of global citizenship.