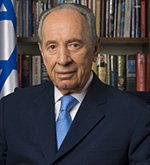 During his lifelong service to Israel, Shimon Peres has held every position of note in Israel’s government.

A member of the Knesset since 1959, Peres served as deputy minister of defense from 1959 to 1965. After leaving the Mapai Labor Party with Ben-Gurion in 1965, he became secretary general of Rafi, and in 1968, was instrumental in uniting Rafi with Mapai to form the Israel Labor Party.

Among his wide range of ministerial posts, Peres headed the ministries of Immigrant Absorption (1969), Transport and Communications (1970-74), Information (1974), and Defense (1974-77). The highlight of his tenure as defense minister was the Entebbe rescue operation.

In 1977, Peres was elected chairman of the Labor Party and in 1984, when a National Unity Government was formed, served first as its prime minister (1984-86), and then as vice premier and minister of foreign affairs (1986-88). During his term as prime minister, Israel withdrew from Lebanon and an economic stabilization plan was implemented. From December 1988 until the dissolution of the National Unity government in 1990, Peres served as vice premier and minister of finance and, from 1990 to 1992, led the opposition in the Knesset. He began his second tenure as Israel’s minister of foreign affairs in 1992 with the establishment of the new Labor-led government, during which he played a leading role in the Oslo Accords, which earned him the Nobel Peace Prize in 1994.

The Peres Center for Peace was created by Peres in 1996 and inaugurated in 1997. From 1997 to 2007, he served as foreign minister, minister of regional development and minister for the development of the Negev and the Galilee under the governments of Ariel Sharon, Ehud Barak, and Ehud Olmert. In 2007, he became president of the State of Israel, a position he held until the end of his term in 2014.

Peres was born in Belarus and immigrated to Eretz Israel with his family at age eleven. He studied at the Ben Shemen Agricultural School, and was one of the founders of Kibbutz Alumot in Lower Galilee. In 1945, he was elected secretary of the Hano’ar Ha’oved (Labor-Zionist) youth movement. He was married to the late Sonia (who passed away in 2011), and has three children, eight grandchildren, and three great-grandchildren.

Peres has authored a number of books and many articles. Today, he continues to serve the community and the causes in which he believes in pursuing his activities at the Peres Center for Peace.