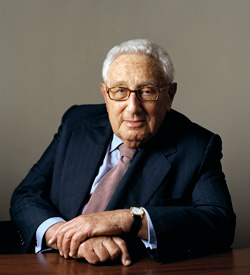 The Hon. Henry A. Kissinger

Henry Alfred Kissinger was sworn in on September 22, 1973 as the 56th Secretary of State, a position he held until January 20, 1977. He also served as Assistant to the President for National Security Affairs from January 20, 1969, until November 3, 1975. In July 1983 he was appointed by President Reagan to chair the National Bipartisan Commission on Central America until it ceased operation in January 1985, and from 1984 to 1990 he served as a member of the President’s Foreign Intelligence Advisory Board. From 1986 to 1988 he was a member of the Commission on Integrated Long-Term Strategy of the National Security Council and Defense Department. He has served as a member of the Defense Policy Board since 2001.

At present, Dr. Kissinger is Chairman of Kissinger Associates, Inc., an international consulting firm. He is also a member of the International Council of J.P. Morgan Chase & Co., a Board Director of the Atlantic Council of which he first joined in 1967, a Counselor to and Trustee of the Center for Strategic and International Studies, an Honorary Governor of the Foreign Policy Association, and an Honorary Member of the International Olympic Committee. Among his other activities, Dr. Kissinger served as a member of the Board of Directors of ContiGroup Companies, Inc. from 1988 to 2014 and remains an Adviser to the Board, a position he also holds at American Express Company since 2005, after serving on the Board from 1984. He is also a Trustee Emeritus of the Metropolitan Museum of Art; a Director Emeritus of Freeport-McMoRan Copper and Gold Inc.; and a Director of the International Rescue Committee.

Among the awards Dr. Kissinger has received have been a Bronze Star from the US Army in 1945, the Nobel Peace Prize in 1973, the Presidential Medal of Freedom (the nation’s highest civilian award) in 1977, and the Medal of Liberty (given one time to ten foreign-born American leaders) in 1986.

From 1954 until 1969 he was a member of the faculty of Harvard University, in both the Department of Government and the Center for International Affairs. He was Director of the Harvard International Seminar from 1952 to 1969.

Dr. Kissinger is the author of multiple books, including most recently Does America Need a Foreign Policy?: Toward a Diplomacy for the 21st Century (2001), Ending the Vietnam War: A History of America’s Involvement in and Extrication from the Vietnam War (2003), Crisis: The Anatomy of Two Major Foreign Policy Crises (2003), On China (May 2011), and World Order (September 2014).

Dr. Kissinger is married to the former Nancy Maginnes and is the father of two children by a previous marriage.