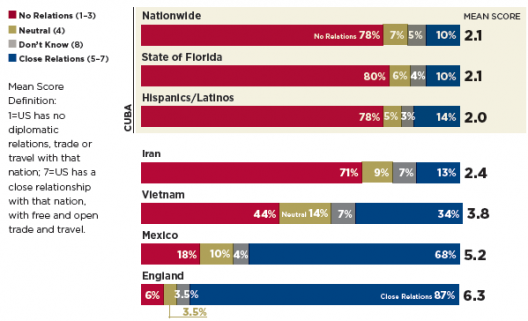 Perception of US Diplomatic Relations with Other Nations

Respondents were asked to rank the closeness of the United States’ relationship with various countries using a 1-7 scale. This question helped determine understanding of the current status of the United States’ international relationships. An overwhelming majority of people indicated very close ties to England, with a strong majority also ranking the US relationship with Iran as very weak, which signifies baseline knowledge of current status. Among the countries tested, respondents—nationwide as well as Floridians and Latinos—began the poll with an understanding that the United States had the poorest relationship (which involves no diplomatic relations and a prohibition on trade and travel) with Cuba.

Americans Rank Relationship With Iran as Worse Than With Cuba

Support for Normalizing Relations or Engaging More Directly With Cuba

For decades the rhetoric around changing Cuba policy has been that Florida would never let it happen. The results from this poll challenge that long-held belief by putting Florida 7 percentage points ahead of the nation in favoring normalization. Not only are Floridians more willing than a supportive nation for change, but they favor strongly favor normalization by 8 percentage points more than the country as a whole. Latinos share near identical levels of support. Floridians and Latinos are more likely to be well-educated on the issue of the US-Cuba relationship because of geographic and personal ties. The numbers indicate that the closer people are to the issue, the more likely they are to favor changing policy.

56% of Americans, and More Than 60% of Floridians and Latinos Favor Changing US Policy Toward Cuba

Normalize/Engage With Cuba by Gender

Men tend to be more comfortable with policy change in Cuba. This tends to be true across the policy spectrum with women generally showing a greater reluctance for change.

Normalize/Engage With Cuba by Education

As education levels increase, so does support for US engagement with Cuba. This points to a similar trend seen in the higher levels of support among Floridians and Latinos: the more a person knows about the issue, the more likely he or she is to support changing policy. While Floridians and Latinos are more knowledgeable because of geographic proximity and heritage, people with higher education are likely be better informed about the role of diplomatic and economic engagement and support normalization accordingly.

Normalize/Engage With Cuba by Party

Much like with the results from Florida, this breakdown challenges previous conceptions that US-Cuba policy issues are split across party lines. While support for changing policy is certainly more prevalent among Democrats and Independents, the majority of self-identified Republicans favor normalization. With increasing bipartisan support for normalization, politicians from both sides of the aisle should be less likely to fear a popular backlash against their support of policy change. When discussing the changing rhetoric around US-Cuban relations these numbers were some of the most important in understanding the trend of public opinion.

Support Is Strongest Among Democrats, But the Majority of Republicans Support Change

As previously noted, Florida leads the nation in favoring normalization. This is not just in certain areas of the state: every single region is ahead of the national average, some by 17 percentage points. One of the most notable, however, is Miami-Dade County, the unofficial capital of Cuban-Americans. A long-held belief is that this county is the bastion of proembargo support; yet, 64 percent of Miami-Dade County favors changing US-Cuba policy. This number is one of the most crucial in challenging assumptions and understanding the new support for changing US policy.