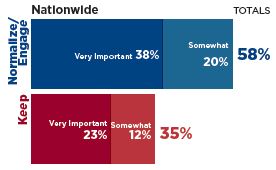 Respondents were read factual statements about the United States and Cuba and asked if they considered each statement a reason to normalize relations or keep current policy in place.

STATEMENT 1: Cuba is only ninety miles away from the US mainland.

STATEMENT 2: Our government only allows Cuban-Americans to travel to Cuba without permission. If you are not Cuban-American, the US Treasury Department must approve your travel. We do not do that with any other country.

When told that Cuba was only ninety miles off the coast of Florida, or when it was shared that US travel policy with Cuba is unique in the world, approximately six in ten people said this was an important reason to normalize relations. The majority of those who saw the statement as justification to engage with Cuba considered it a “very important” reason (not just “somewhat important”), indicating the intensity of desire for change.

“99 Miles Away” and Travel Restrictions Are Compelling Logic for Engagement

STATEMENT 3: The Cuba trade embargo is estimated to cost the US economy as much as $4.8 billion in exports and related economic output per year.

Latinos are 7 percentage points ahead of the nation in considering the economic impact of the embargo to be a reason to open relations with Cuba. The US Latino community had been particularly hard hit by the downturn of the US economy—a potential reason for its support of any policy change that could yield additional economic opportunities. Across the board the results show strong support for normalization among those who found this statement to be an important reason to change policy.

Economic Policy Is Particularly Important to Latinos Among Reasons to Engage

STATEMENT 5: After more than fifty years of no US relations with Cuba the Castro regime remains in power.

Most Americans consider Cuba’s abysmal human rights record under Fidel and now Raúl Castro a reason to keep current policy. The original intention of the embargo was to isolate the country through comprehensive economic sanctions. Though the embargo has failed to isolate Cuba, the majority of Americans and Floridians believe that the Castros remaining in power fifty years later is a reason to keep current policy. Latinos, however, see the continuation of the Castro regime as a reason to normalize. They are also potentially slightly more inclined to change policy in light of the human rights situation.

Reaction to Statements in Support of Normalization

Respondents were read a series of statements made by those in favor of normalization. They were then asked whether each argument was very convincing, somewhat convincing, not convincing, or if they didn’t believe it. Those who considered the statements to be very and somewhat convincing are depicted in this chart. Much like when asked about possible policy changes, people were most responsive to the economic elements of this argument, believing that new business opportunities were a convincing reason to change current policy. As with the question that addressed the loss of business due to the embargo, Latinos lead the nation in finding this a particularly important reason to normalize relations.

Economic Arguments Prove to Be Most Convincing for Normalization

Reaction to Statements in Opposition to Normalization

Respondents were read statements made by those in favor of maintaining current US policy. Similar to the previous figure, they were then asked whether each argument was very convincing, somewhat convincing, not convincing, or if they didn’t believe it. Unsurprisingly, in Florida, a state where approximately seven in ten Cuban-Americans live, people found the argument that invokes Cuban-Americans and their status to be particularly persuasive in keeping US policy. The previous question, which listed reasons in favor of ending the embargo, along with the question on the state sponsors of terrorism, both point to the power of information and messaging. A majority of people were convinced by the pro-normalization arguments, and then a slightly smaller majority— but a majority, nonetheless—also were swayed by the pro-embargo arguments.

Reasons for Maintaining the Embargo Also Receive Support Across the Board