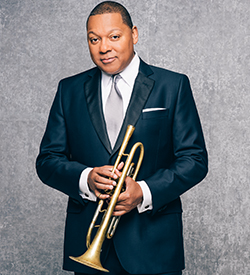 Wynton Marsalis is the managing and artistic director of jazz at Lincoln Center and a world-renowned trumpeter, bandleader, and composer.

He has recorded more than seventy jazz and classical recordings, which have won him nine GRAMMY® awards and sold over seven million copies worldwide.

In 1983, he became the first and only artist to win both classical and jazz GRAMMYs® in the same year.  Today Wynton is the only artist ever to win Grammy Awards® in five consecutive years.

Marsalis is an internationally respected educator and a recipient of honorary doctorates from over twenty-five of America’s top academic institutions including Columbia, Harvard, Howard, Princeton, and Yale.

In 2001, he was appointed messenger of peace by Mr. Kofi Annan, secretary-general of the United Nations, and he has also been named a cultural ambassador for jazz by the US State Department.

In 2005 Wynton received The National Medal of Arts, the highest award given to artists by the United States government. Britain’s senior conservatoire, the Royal Academy of Music, granted him Honorary Membership, the Academy’s highest decoration for a non-British citizen. The French Ministry of Culture appointed Wynton the rank of Knight in the Order of Arts and Literature and in the fall of 2009 he received France’s highest distinction, the insignia Chevalier of the Legion of Honor.

In July 2014 he became director of jazz studies at The Juilliard School, one of the world’s leading music schools.