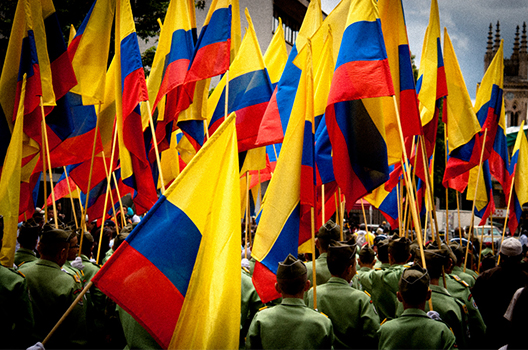 The Atlantic Council’s Adrienne Arsht Latin America Center concluded on December 8, 2016 the first convening of its Colombia Peace and Prosperity Task Force, chaired by US Senators Roy Blunt (R-MO) and Benjamin Cardin (D-MD). The meeting ended with a call for the incoming Donald Trump administration to make strengthening relations with this critical US ally a key foreign policy goal. Meeting just one week after Congressional approval of the peace accords with the Revolutionary Armed Forces of Colombia (FARC), the Task Force reiterated the importance of continued bipartisan support to ensure a lasting peace in the country. It called for mobilizing new US and international development assistance as well as expanded diplomatic, technical, and security engagements.

As the new Trump administration takes office, the Task Force will focus on several objectives between now and its expected mid-April recommendations.  Among those are: how to make “Peace Colombia” a long-term congressional and administration foreign policy priority; determining the right funding levels for United States-Colombia cooperation; and analyzing how to catalyze support from the international community and development institutions.

“Colombia’s historic peace accord and hard fought victories against the illegal drug trade are remarkable achievements.” said co-chair Senator Blunt. “It is important that we continue our commitment to enhancing Colombia’s security capacity and expanding economic opportunities between our nations.”

Co-chair Senator Cardin spoke of the need to ensure continuous support as Colombia implements a hard-won peace deal: “Colombia is one of our most important partners in the Americas and, as the U.S. undergoes a major political transition, we must take further steps to strengthen this strategic relationship. The Atlantic Council task force will play a central role in helping Congress and the next Administration set priorities for how the U.S. can best support Colombian efforts to strengthen governance and security in the years ahead.”

The Task Force meeting received a briefing from US Ambassador to Colombia Kevin Whitaker, Colombia’s Ambassador to the United States Juan Carlos Pinzon and Special Envoy for the Colombian Peace Process Bernard Aronson. All three urged consolidated bilateral cooperation in the next administration to guarantee mutually beneficial economic growth and regional stability.

“The US-Colombia relationship is the most important strategic partnership in the hemisphere, and the key to our success has been strong US bipartisan support,” said Colombian Ambassador to the United States Juan Carlos Pinzón. “As seen in the successes of Plan Colombia, the US-Colombia alliance has helped drive Colombia’s transformation over the past decade and a half. Building on this strategic partnership through Peace Colombia will be crucial as we work to build a stable and lasting peace, and this new task force will have a vital role to play in the post-conflict period.”

“Plan Colombia was a success in large part because of the bipartisan support it enjoyed in the United States. The next phase, Peace Colombia, will need the same kind of endorsement. The breadth of leaders who joined us today—from Congress, the private sector, and civil society—demonstrates a commitment to continued engagement with this critical ally,” said Peter Schechter, Senior Vice President for Strategic Initiatives and Director of the Adrienne Arsht Latin America Center at the Atlantic Council.

The Adrienne Arsht Latin America Center will publish a final report on the Task Force’s recommendations in mid-2017.

Other Task Force participants include: