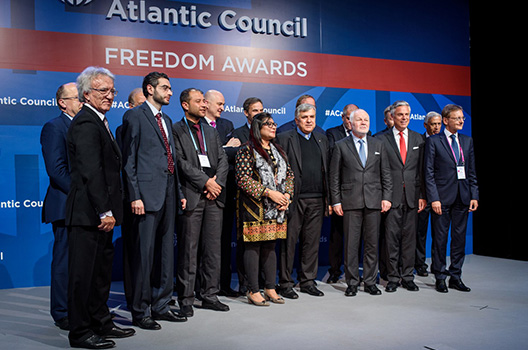 The Atlantic Council Freedom Awards recognize extraordinary individuals and organizations that defend and advance the cause of freedom around the world. Inaugurated in Berlin on the 20th anniversary of the fall of the Berlin wall, the 2009 Freedom Awards recognized the efforts of the American, German, Polish, Czech and Slovak, as well as the allied troops of NATO, to bring about a peaceful end to the Cold War. In 2010, on the 30th anniversary of Solidarity’s founding, Wrocław, Poland became the permanent European home of the Freedom Awards in recognition of Poland’s unique role in spreading the message of solidarity and freedom globally. Each year the awards celebrate past triumphs of freedom, but also those who continue the struggle today.