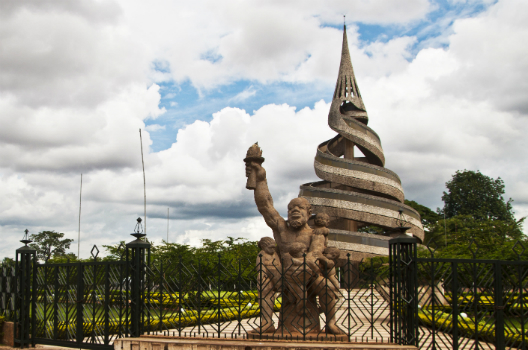 The primary political fault line running through Cameroon, a country in Central Africa, is not ethnic, but linguistic – the population is divided between its English and French speaking parts. In recent months, the linguistic cleavage has started to widen, with increasing demands for Anglophone autonomy and secession. This amplification of decades-old divides is in large-part due to the repressive strategies employed by the Francophone central government in response. A continuation of this dispute may heighten the growing violence and security concerns in the country and threaten the stability of a region already facing extensive intra-state conflict.

Since November 2016, Cameroon has seen numerous protests and calls for independence by activists in the country’s two majority Anglophone regions, the Northwest and Southwest regions that border Nigeria. The more recent protests of September and October 2017—which overlapped with Cameroon’s 56th anniversary of unification—were sparked by lawyer, student, and teacher strikes held in late 2016. These earlier demonstrations stemmed from Anglophone frustrations with the country’s opposing judicial and education systems and exposed the difficulties faced when transitioning from English-based systems in the Anglophone regions to those used nationally; in the Northwest and Southwest regions, the English Common Law system and English education are dominant but are not integrated into national practices, resulting in conflicting judicial decisions and educational gaps across Cameroon. Moreover, the protesters articulated the perceptions of many Anglophone Cameroonians who feel that their language is deemed inferior by the government, despite English’s status as an official national language.

Although these sentiments are not new, the secessionist movement had previously operated underground and focused on pressuring the central government to return to a federalist system with equal governance. Now, the movement is becoming increasingly mainstream; in just under a year, it has shifted from asking for more recognition, to calling for more autonomy and federalism, to demanding full independence for Ambazonia, a sovereign Anglophone state.

This is a seismic political shift, and the central government and security forces have reacted violently, resorting to repressive tactics to quell protests. In addition to employing teargas and live bullets, the government has repeatedly blocked internet and cellular service to prevent information dissemination and public gatherings. Further, in January 2017, the Ministry of Posts and Telecommunications issued a statement warning of ‘criminal penalties’ for ‘issuing or spreading false news,’ aimed as social media posts in the Anglophone regions. The conflict has spiked in October and November 2017, when as many as seventeen protesters and two gendarmes were reported killed, the government issued arrest warrants for fifteen secessionist leaders and instituted regional curfews, and four homemade bombs were detonated by secessionists in the Northwest capital, Bamenda.

The roots of the conflict, Cameroon’s linguistic cleavages and the resulting marginalization of Anglophone communities, date back to the state’s unification in 1961 when the Anglophone regions, formerly the British Cameroons colonies, voted to join former French Cameroun in a federalist system. However, in 1972, Cameroon’s Francophone leaders disabled the federal system and established the unitary system that exists today.

Since this time, the Anglophone regions have been marginalized and underrepresented within Cameroon’s governing, educational, and legal systems. Not only is there a lack of high-level Anglophone politicians who hold seats in the central government, the highest government leader from the regions, Prime Minister Philémon Yang, does not hold significant power or decision-making authority. Moreover, Anglophone Cameroonians suffer from lack of employment and educational opportunities in various sectors due to the necessity of possessing native French fluency. Notably, Cameroon’s linguistic cleavages do not correlate with the country’s ethnic divisions; linguistic tensions tend to trump ethnic ties, with Francophone members of some tribes shunning or professing superiority over their Anglophone neighbors.

The current protests and subsequent police actions have resulted in state-led violence against the Anglophone minority, arbitrary arrests of activists and journalists, and the restriction of Anglophone Cameroonian citizen’s rights to assembly, free speech, and access to information. However, while much of the international community, including the United States and the United Nations, have condemned the government’s response to the protests, there is unlikely to be further action taken as Cameroon is a significant anti-terrorism partner, but is not of much strategic interest otherwise.

Meanwhile, as President Paul Biya has refused to negotiate or conduct national dialogues with the Anglophone regions unless independence is taken out of the discourse, the stalemate between the government and protesters may have widespread effects on both the country and the larger Central African region. While Cameroon has been led by President Biya for thirty-five years, it has been hailed as a fairly stable country in a region mired by internal state conflicts. However, a continuation of protests and violence may result in destabilization, both internally and within the region as Cameroon’s discord adds to the various intra-state conflicts nearby.

Additionally, the conflict between the Anglophone regions and the central government could aggravate regional security concerns by weakening the anti-terror campaign against Boko Haram.  Because Cameroon contributes troops to regional counterterrorism efforts, any violence and repression conducted by security forces against internal protests may exacerbate terrorist threats and fuel recruitment into extremist groups.

Given these security concerns, the escalation of global secessionist movements in recent months, including those of Catalonia in Spain and Kurdistan in Iraq, and the resulting threats of violence, demands for an independent Anglophone-Cameroon state raise questions for international policymakers: How and when should international partners respond to Anglophone Cameroon’s protests and the government’s subsequent responses, and how do these responses relate to policy positions on other global secessionist movements? How will this conflict affect regional stability, particularly in relation to increasing concerns about internal conflicts in the Democratic Republic of the Congo and the Central African Republic? And, what are the implications for the United States, specifically for US security support for anti-terrorism campaigns against Boko Haram? While the answers to these questions may not be known for some time, it is essential for policymakers to understand the nature of the Cameroonian conflict and its implications for internal and regional stability.

Alexandra Fairbend was an intern with the Atlantic Council’s Africa Center.

Image: The monument de la réunification (Reunification Monument) located in the national capital of Yaoundé, symbolizes the struggle for independence and the reunification of the former British and French colonies into a single Cameroon. Photo credit: Creative Commons