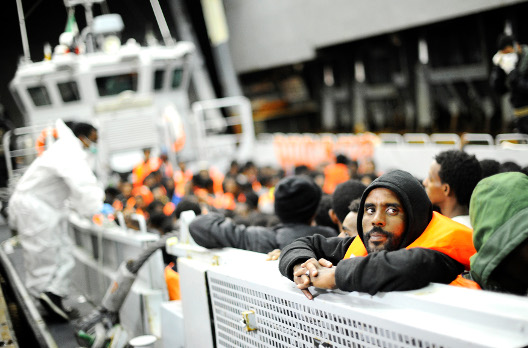 Italy’s coastguard and navy rescued more than 10,000 primarily African migrants from capsized, sinking, or distressed vessels in the Mediterranean Sea in the last week, and more than four hundred people are presumed dead after their overloaded boats capsized. These shocking numbers have become daily occurrences, and highlight the crisis facing Europe as migrants from across Africa flee turmoil in their home countries.

Hundreds of thousands of people every year enter Europe illegally, leaving their home countries due to war, instability, or economic malaise. Most migrants depart from Libya’s coast, where ruthless smugglers flourish unchecked.

Historically, migrants from the Horn of Africa have comprised the bulk of Mediterranean crossings. Political repression and mandatory, indefinite conscription in Eritrea have led thousands to flee the small Horn of Africa nation each month, and the migrants pay people smugglers thousands of dollars to take them through Sudan and into Libya. Somalis for years have fled the war-torn country by the thousands.

Increasingly, Africans fleeing conflict and instability in the Sahel make the journey to Libya; even in countries without active conflicts, such as Ghana, Côte d’Ivoire, and Senegal, the allure of a better life in Europe—particularly for Africans hoping to join relatives abroad—is reason enough to risk the trip.

But the journey is a treacherous one. Compared to figures from April 2014, once considered a record year for illegal immigration, 2015 has already seen ten times more migrant deaths at sea.

As spring brings warmer temperatures and calmer seas, we can expect the staggering number of migrants attempting to cross the Mediterranean, and the subsequent death tolls, to rise.

The crisis has revived a debate about Europe’s response to illegal migration and its responsibility to answer a growing humanitarian emergency. Human rights groups have slammed the European Union (EU) in recent days for its “ongoing negligence” and the inadequate response deemed a “patchwork quilt” of resources.

Italy is disproportionately affected by the massive influx of migrants from the Mediterranean due to its proximity to North Africa. Its most southern island of Lampedusa—scene of the 2013 tragedy in which 366 migrants drowned—is a mere 180 km from the Libyan coast.

To address the humanitarian aspect of the crisis, Italy launched Operation Mare Nostrum in 2013, a robust response that included air and naval assets for surveillance, search and rescue, and maritime security operations. The operation was ostensibly a success: in just over a year, the Italian coastguard and navy rescued 150,810 migrants and prosecuted 330 people smugglers.

But its success came at a cost; critics argued that Mare Nostrum was a “pull factor” encouraging migrants to set sail for Europe.

And Italian taxpayers—already squeezed by the country’s recession—grew weary of footing the bill for the €9 million a month operation. Calls for a robust EU-wide and EU-funded response largely went ignored.

When the Italian operation ended in late 2013, Frontex, the European Union’s border management agency, designed its own response. The official mission, dubbed Joint Operation Triton, runs through the end of 2015.

Triton emulates Mare Nostrum, but is a substantially scaled-down version. Relying on member states to supply ships and air support, Triton has only one-third of Mare Nostrum’s funding. The operation’s primary focus is border protection, and it patrols a dramatically reduced area. Mare Nostrum rescued most migrants near the Libyan coast, where overcrowded and rickety vessels often capsize shortly after departing; Triton’s mandate is to patrol no farther than thirty nautical miles from Italy’s coast.

This scaling back of the European mission and its resources has done little, if anything, in the short-term to impact the number of migrants attempting to reach Europe by sea. Increasingly, commercial vessels aid migrants in distress, despite having no formal training in search and rescue operations (the ships are legally bound to answer distress calls from other vessels). A rescue can easily cost $500,000 in extra fuel, personnel costs, and lost time, and no formal mechanism exists for financial reimbursement.

Europe has good reason to be concerned by the overwhelming number of migrants reaching its shores: more than 15,000 migrants have already made it to Italy this year, overwhelming the country’s reception centers and provoking controversy over Europe’s immigration and asylum policies. Furthermore, Europeans are increasingly concerned that the same porous borders used by illegal immigrants will be exploited by terrorists.

Multifaceted, long-term solutions are required to eliminate the factors leading to mass African migration to Europe: instability, political repression, and economic hardship. If developments over the past year are any indication—conflict continued in Somalia, South Sudan, and the Central African Republic, while the continent’s largest economy grappled with falling oil prices—there is a long way yet to go.

The resulting migration crisis as it stands is unsustainable, and Operation Triton is merely a stopgap solution. The EU Commissioner for Migration Dimitris Avramopoulos called the past week’s tragedies “the new norm” and called on member states to “adjust” their responses accordingly. But the EU’s rhetoric of concern does not match its action, and the EU must do more to find a realistic, long-term solution to a crisis that shows no signs of abating.

Image: Migrants rescued by the Italian Navy who attempted to cross the Mediterranean Sea from Libya. REUTERS/Giorgio Perottino