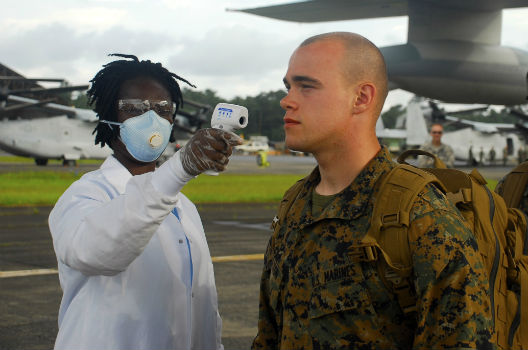 The global HIV/AIDS epidemic and the 2014 West Africa Ebola outbreak varied in length, number of lives lost, and geographic areas affected. However, both posed national security risks to the United States, and both therefore prompted large-scale US government responses: the President’s Emergency Plan for AIDS Relief (PEPFAR) and Operation United Assistance in Liberia, respectively. Today, the United States is confronting these kinds of public health crises as well as a score of terrorist threats, and it is possible that the two problems could merge as terrorists seek to use bioterrorism to achieve their goals. US national security has traditionally focused on security’s “hard” elements—terrorism, state collapse, and crime. But public health threats—whether introduced deliberately through bioterrorism or emerging from natural causes as the 2014 Ebola outbreak did—also pose a significant threat to the homeland and thus deserve to be prioritized by the United States.

World leaders are increasingly attuned to the potentially disastrous consequences of the unchecked spread of disease, which, in addition to human suffering, can cause political unrest and long-term economic downturn. A combination of governance issues, fragile health systems, urbanization and population growth, porous borders, and frequent migration could make Africa ground zero for the emergence of such public health threats. Three of the six Center for Disease Control’s “category A” bioterrorism agents—considered the most lethal and difficult-to-stop diseases, including Viral Hemorrhagic Fevers like Ebola—already exist on the continent. A new Atlantic Council report argues that the United States should be more worried about health threats emerging from Africa, particularly as an increasingly interconnected world makes it easier than ever for disease to spread across oceans and borders. The 2014 Ebola outbreak, for example, killed over eleven thousand people in six countries in just twenty-one months and could have killed many more but for vigorous international and local efforts to contain the virus.

During a disease outbreak, air travel from Africa’s densely populated urban areas could prove disastrous for the United States. Forecasts show that Africa’s total air traffic will grow at a rate above 6 percent for the next two years, slightly above the global average. With 951,000 Americans traveling to Africa in 2015 (up from 663,000 in 2006), 420,000 African visitors to the US in 2015, and over 2 million Africa-born people living in the United States, strong diasporic ties and tourism escalate the risk of uncontained spread of an illness. This issue was of particular concern to the United States during the 2014 Ebola outbreak and even sparked calls from some Americans to terminate all air links with West Africa.

Closing America’s borders proved unfeasible, however, as there were no direct flights from Ebola-affected countries to the US and no easy means of ensuring that passengers from those countries could not simply board another airline’s flight in a European transit hub. To contain the disease, United States executed Operation United Assistance (OUA) in Liberia, the first ever US military operation focused on disease-driven humanitarian assistance abroad. Before OUA launched, the World Health Organization forecast that there would be thousands of new Ebola cases per week in the region, with regional air travel and under-prepared and overwhelmed healthcare workers and family caretakers facilitating the disease’s spread. The launch of a military operation highlighted US seriousness in responding to this threat. When cases of Ebola were diagnosed in New York City and Dallas via travel from West Africa, it sparked a media frenzy. Multilateral institutions also felt a need to respond—the United Nations Mission for Ebola Emergency Response (UNMEER), authorized in September 2014, was the first ever UN mission confronting a global health crisis. Given the likelihood of another epidemic, it is unlikely to be the last.

Though Operation United Assistance rapidly and successfully shored up infrastructure and shortages of personnel, the mission was ill-equipped to respond to an urban outbreak of Ebola, a disease which had previously been contained in rural areas. In the dense slums of Monrovia, the virus spread with unprecedented speed. The United States cannot afford to be caught flat-footed when the epidemic occurs and must plan for an increasingly urbanized Africa in its future measures. As Africans migrate to cities in ever-larger numbers, they mostly will be absorbed into the already-densely populated informal settlements (or “slums”). Strong urbanization trends also point to an increase in the number of Africa’s megacities, potentially growing to six by 2030. In urban settings, infected persons without symptoms can pass a disease easily and quickly to others, making typical means of epidemic control more difficult to fulfill.

Terror groups seeking to carry out attacks may turn to utilizing disease to their advantage. Diseases do not respect borders, and there is potential for a bioterrorist attack to affect—or emanate from—Africa. While far less common than conventional terrorism, the 2001 anthrax attacks in the United States and the 1995 Tokyo sarin gas attacks are recent and deadly examples of bioterrorism. Of particular concern is Boko Haram’s relationship with, and mirroring of, al-Qaeda in the Islamic Maghreb, which reportedly has experimented with chemical or biological weapons. During the Ebola outbreak, national security analysts were increasingly worried about a weaponized version of Ebola, especially one that could spread via passengers on transatlantic flights. Luckily, while the threat does exist, it does not appear imminent. There are major obstacles to achieving a bioterror attack, namely the massive amounts of space and supplies needed and high levels of organization that even the more sophisticated groups do not have.

US investment in health systems’ resiliency across the African continent both saves millions of lives per year and protects US citizens in the long run. Presidents Bush and Obama acknowledged these facts in the creations of PEPFAR and OUA, respectively. Recognizing, the lack of available global guidance on countering the HIV/AIDS epidemic, PEPFAR addressed the national security issues presented by a high prevalence of HIV and AIDS in military personnel and in many African countries’ working populations. Via PEPFAR, the United States has positioned itself as the global leader in responding to the HIV/AIDS crisis. The program boasts major successes, giving 11.5 million HIV-positive people access to antiretroviral treatment, 1.1 million of those being children. This number is up from fifty thousand prior to PEPFAR’s inception. In Malawi, Zambia, and Zimbabwe, the epidemic is no longer growing among adults and babies, quickly approaching the UNAIDS target goals. Moreover, the program has enjoyed bipartisan support and lends the United States an unprecedented degree of good will and moral leadership in Africa, while simultaneously promoting US interests abroad.

Critics of PEPFAR note that the program is expensive and unsustainable, costing US taxpayers over $70 billion since its conception, and that it does little to strengthen existing health systems in target countries. To address this criticism, the United States should focus specifically on capacity building—training doctors and other health professionals, developing healthcare infrastructures, and strengthening early warning mechanisms—with the end goal that PEPFAR eventually will be unnecessary. In lockstep with the development of stronger health systems is the bolstering of governance capabilities—which not only monitor borders and ensure that malevolent actors do not get their hands on potential bio-agents, but also instill public trust in the government to respond to a crisis. While this supports countries in reaching certain development goals, it also ensures US security by countering public health threats that could negatively impact US interests in Africa and its population at home.

Liviya David is a Project Assistant in the Atlantic Council’s Africa Center. Follow her on Twitter @LiviyaDavid.

Image: US Marines from the Special Purpose Marine Air Ground Task Force Crises Response 14-2 get their temperature checked as they arrive in Liberia (Photo credit: US Army Africa)