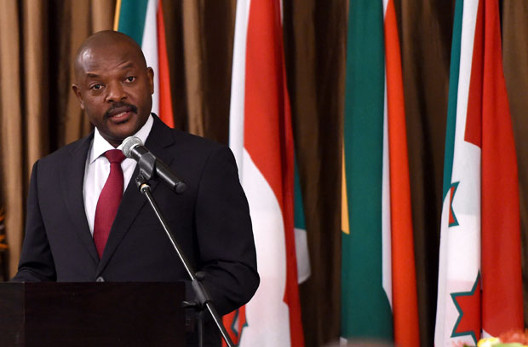 The ruling party of the tiny, Great Lakes nation of Burundi will make arguably the most momentous decision in the young country’s history when it chooses a candidate for June’s presidential elections this Saturday. Despite an apparent constitutional limit of two five-year terms, current President Pierre Nkurunziza, in power since 2005, is angling for a third.

Should the ruling party select Nkurunziza as their candidate, which looks likely, he would almost certainly win the presidential election. In addition to violating Burundi’s constitution, the move would also go against the spirit of the Arusha Accords, a peace agreement that ended the country’s disastrous twelve-year civil war in 2005. The guarantors of Arusha took pains to enshrine a competitive, fair, and inclusive political system in the peace process, and Nkurunziza’s efforts to run a third time jeopardize the fragile peace Arusha achieved.

Parliament last year narrowly voted down Nkurunziza’s attempt to amend the constitution to allow him to run for a third term in office. His supporters maintain that the term limit provision does not apply to Nkurunziza because he was selected by parliamentarians, rather than installed by popular vote, for his first term. The president, they argue, has only been “elected” once (although if this is truly the case, it is unclear why Nkurunziza has gone through so much trouble to change the constitution).

Thousands of Burundians beg to differ, and have taken to the streets to oppose the rumored third term. Recent demonstrations resulted in clashes between the police and stone-throwing protestors. Last week, police used tear gas and water cannons to disperse demonstrators, and arrested sixty-five people whom they charged with “participation in an insurrectionary movement.” If convicted, the protestors face lengthy prison terms.

Presidential elections are set for June 26; parliamentary elections are in May. Calls from opposition leaders, his own party, and the international community (including from former Burundian President Pierre Buyoya) for Nkurunziza to stand down from a third term have not been heeded. Already, more than 8,000 Burundians have fled into neighboring Rwanda and Democratic Republic of the Congo to escape pre-election unrest.

The ruling party’s youth wing, known as the imbonerakure (“those that see far” in Kirundi), has morphed in recent years from a spontaneous youth militia to a permanent pro-Nkurunziza paramilitary force. The group reportedly consists of tens of thousands of fighters, many of whom are thought to be “demobilized” remnants of the Hutu militias that brutalized civilians during the civil war.

The imbonerakure is a worrying threat to Burundi’s stability. A leaked United Nations (UN) memo reported that police and military officials affiliated with the ruling party have been training, arming, and equipping the imbonerakure to attack opposition party meetings and beat up opponents. The government denied these claims, though its subsequent expulsion of the UN’s security chief did little to dispel suspicion. Burundians who fled the country in recent weeks report politically motivated violence and intimidation by the imbonerakure. Should the attacks continue, more Burundians will seek refuge in neighboring countries, exacerbating existing ethnic tensions there and potentially destabilizing a fragile region.

Amid the pre-election unrest, the role of Burundi’s official security services remains to be seen. Burundi’s Security and Defense Ministers pledged to deploy of the police and army to counter the protesters, and, according to Interior Minister Gabriel Nizigama, “to punish and bring to justice the perpetrators, instigators of these calls for uprisings.” The security forces will likely continue to back the president in the pre-election period, though it is unclear whether they would remain loyal in case of a large-scale post-election uprising (in late 2014, for example, Burkina Faso’s army tried to seize power after a similar debate over term limits, and ultimately a Lieutenant Colonel became head of the interim government).

But it’s not too late for Nkurunziza to leave office gracefully and peacefully.

The ruling party has yet to announce their candidate for the elections, and Nkurunziza could theoretically reject the party’s nomination if he receives it.

To step down after two terms would seal Nkurunziza’s legacy of leading Burundi out of civil war. Nkurunziza’s rule has been far from perfect—and the country still faces dire political and developmental challenges—but there have been some areas of noteworthy improvement, including the country’s successful, and markedly improved, taxation system. A peaceful handover of power would leave Nkurunziza well-placed to land a lucrative diplomatic position after he leaves office.

Buyoya, two-time ruler of Burundi, proves that there is life after the presidency in Burundi: he has served as High Representative of the African Union for Mali and the Sahel, among other high-profile diplomatic roles, since leaving office in 2003. Unlike some of his African compatriots, if Nkurunziza leaves office after his second term, he will not face sanctions or indictments that would limit his ability to live a free, prosperous, and indeed, even honored life.

Saturday’s decision will reverberate throughout Burundi. It has the ability either to spark more violence or to build on Arusha’s foundation for stable—and constitutional—governance in Burundi.