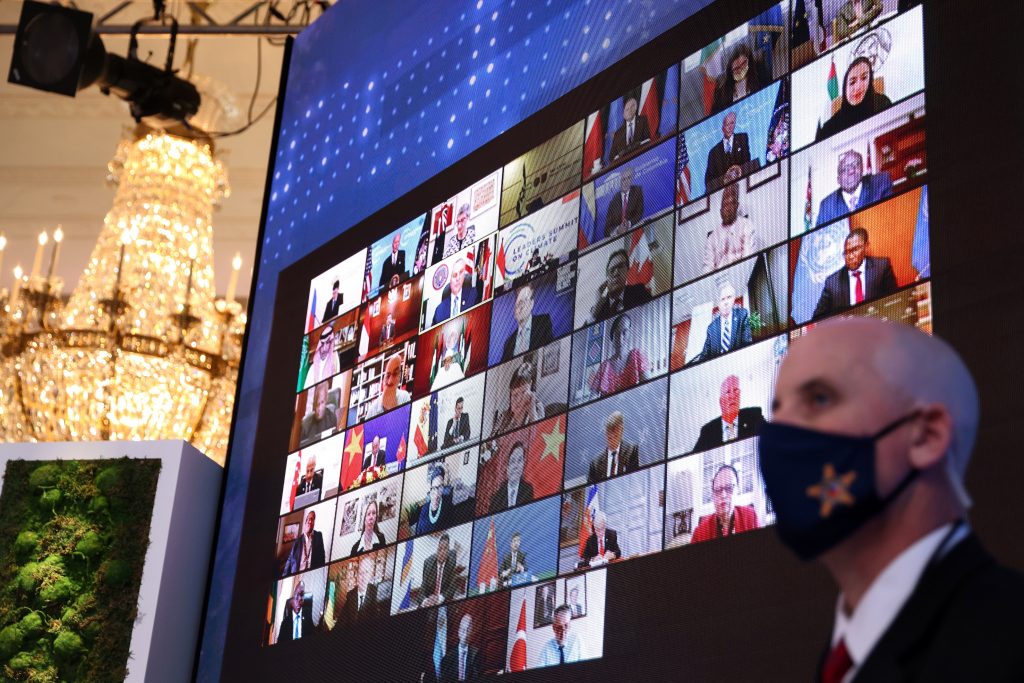 When Congolese President Félix Tshisekedi spoke at the virtual Leaders Summit on Climate this week, he had the force of the continent behind him, as president of the African Union. And he made clear that all the new emissions-cutting pledges from rich countries were not enough. “It is important that this summit accelerates the mobilization of additional and substantial financial resources,” said Tshisekedi, one of five African heads of state to participate in the summit alongside Gabon’s Ali Bongo, Kenya’s Uhuru Kenyatta, Nigeria’s Muhammadu Buhari, and South Africa’s Cyril Ramaphosa. “It also requires simplifying procedures for accessing climate finance for the least developed countries, the majority of which are in Africa. In this regard, I would like to reiterate the importance of the commitment of developed countries to mobilize $100 billion a year from 2020 and to raise it by 2025.”

By pointing to rich countries’ unfulfilled pledges, Tshisekedi focused on the challenge at the heart of a summit where US President Joe Biden pledged a comparatively meager $5.7 billion per year for poor countries by 2024: A continent that contributes so little to global warming stands to be hurt the most by it. And yet, the world has so much to learn from Africa about how to tackle the climate crisis—if the world would only listen.

While home to 15 percent of the world’s population, Africa is responsible for only 4 percent of global carbon emissions. Of the seven countries in the world that emit two-thirds of total greenhouse gas emissions, none are African, according to the Center for Climate and Energy Solutions. Meanwhile, Africa faces droughts, floods, declining agricultural productivity, deforestation, difficult access to water, rising seas, advancing deserts, and a rural exodus.

According to the UN Environmental Program, a warming of 2 degrees Celsius would reduce agricultural yields in sub-Saharan Africa by 10 percent. If warming goes above 3 degrees, the climate would be unsuitable to grow maize, millet, and sorghum across the continent.

While Western countries seek to reduce their carbon footprint, African people are already on the front lines of the climate fight. Around Lake Chad, which lost 90 percent of its surface area in the 1970s and 1980s, nearly 5 million climate refugees are moving from Nigeria, Niger, Chad, and Cameroon, while they’re also under the pressure of another threat: Boko Haram.

From the 1997 Kyoto Protocol to the 2016 Paris Agreement (COP21), most African states have ratified environmental treaties. Awareness campaigns are multiplying, including the African Union’s Agenda 2063, preservation funds such as the Blue Fund, the African Development Bank’s Desert to Power project, or the Great Green Wall initiative to grow trees and plants across the Sahel. From Burkina Faso, home to West Africa’s largest solar power plant, to President Macky Sall’s Green Emerging Senegal Plan, to Ethiopia, which draws 93 percent of its electricity from renewable sources, governments are taking action. Nigeria, for its part, aims to achieve 30 percent clean energy within ten years.

Because Africa’s renewable energy potential remains unmatched, it is the continent most likely to combine industrialization and decarbonized growth. Seven of the ten sunniest countries in the world are in Africa, a tremendous asset for solar energy. Africa has 10 percent of the global potential of hydropower. Even its weaknesses can become assets: 600 million Africans lack electricity, so the continent can rely on abundant renewable energy resources. Led by the African Union, the African Renewable Energy Initiative aims to produce 300 gigawatts by 2030 thanks to Africa’s large renewable energy capacity.

Development that takes advantage of Africa’s climate requires massive investments—fifty billion dollars per year by 2050, according to the United Nations—as well as transfers of technology and expertise. However, as Tshisekedi pointed out, rich countries have not kept their funding promises, a situation made all the more serious by the pandemic draining African countries’ budgets. This issue will need to be given more attention at the next Group of Seven (G7) or Group of Twenty (G20) meetings and at the UN Climate Change Conference of the Parties (COP26) this fall in Scotland.

The key to change could be to give more consideration to African solutions. For Africans, climate change is not a threat, but a reality, and they can provide solutions—both ancestral and innovative—to inspire the rest of the world.

Ancestral solutions come from centuries of agroecology based on traditional know-how. Philosopher Mohammed Taleb has clearly demonstrated that the fight for the environment is first and foremost a social and cultural struggle to defend the lands inherited from ancestors, rather than simply an effort to preserve a stock of resources. It is also a struggle rooted in the working classes.

In the 1980s, President Thomas Sankara’s Burkina Faso was a symbol of African ecology, including a real reforestation policy that was based in part on popular and spiritual culture. The waste sector, a new lever for economic and social development and the pillar of the new circular economy, has existed in Africa since before the colonial period. This African cosmology has been broken by colonization whose goal was to “develop” lands insufficiently exploited by African populations.

Innovative solutions come from Africans’ ecological know-how developed in the era of the digital economy. A Nigerian university trains 300 women to recycle plastic bags into bags, baskets, or other accessories, which are then sold. In Cameroon, an engineer installs solar panels in villages where electricity is too expensive or out of reach. In Kenya, to clean up pollution from Lake Nakuru, a company collects wastewater from sewers and turns waste into fuel briquettes.

At the community level, smart cities are more advanced in Africa than in much of the world. New eco-cities like Kilamba near Luanda, Angola; the green Centenary City near Abuja, Nigeria; the Kenyan technological city of Konza; and Appolonia in Ghana display this promise. The urban emergency justifies this inventiveness, since in 2050, Africa will be the home of one in four of the world’s human beings, including 1.5 billion urban dwellers with exponential energy needs.

Finally, global warming will not be solved without Africa because the world will need its soil.

The Congo Basin, the world’s second largest lung (behind the Amazon), has forests that act as an essential carbon sink for climate regulation. As the UN Environmental Program points out, Africa is home to 30 percent of the world’s mineral reserves, 40 percent of the world’s gold, and up to 90 percent of its chromium and platinum, making it an ideal hub for manufacturing green technologies such as batteries, wind turbines, and hydrogen fuel cells.

The challenge here is not only African. But just as Africa faces the most urgency to tackle the problem, it must be at the heart of the solutions in the universal fight against global warming.

Ambassador Rama Yade is the director of the Atlantic Council’s Africa Center. Follow her on Twitter @ramayade.

Among its efforts to address climate change, the Biden administration has laid out an ambitious agenda for a clean energy revolution. This will require significant quantities of raw materials. And here the African continent has an important role to play.

Image: World leaders appear on a video screen during a virtual Climate Summit with world leaders in the East Room at the White House in Washington, U.S., on April 23, 2021. Photo credit: Reuters/Tom Brenner.