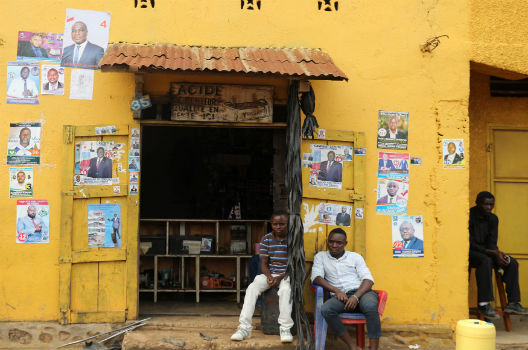 Joseph Kabila’s reluctant withdrawal from the Democratic Republic of the Congo’s December 23 presidential election, after seventeen years in power, was supposed to be a big victory for democracy.

African presidents have too often extended their elected terms time and again through dubious means, and many of us have come to believe that an incumbent-free election is the key to securing democratic consolidation in Africa. When Kabila announced he would not run for a third (and unconstitutional) term last August, there were sighs of relief across the country and abroad. Although he made short shrift of internal party democracy by unilaterally designating his successor, Kabila’s stepping down was seen as an unmistakable sign of progress and his choice of Emmanuel Ramazani Shadary, an unimpressive former Interior Minister, left many hopeful that the opposition might finally have a shot at the presidency. (No election has ever been won by the opposition in Congo).

But the Congo government’s spurious disqualification of popular opposition candidates and the regime’s increasingly desperate attempts to prevent those remaining from campaigning – including by shooting at some of them – demonstrate that Kabila not only intends to retain as much power as possible, but that he intends to turn Congo’s elections into a sham. The fact that his regime’s anti-democratic exactions have received only mild condemnation from Western chanceries is further cause for concern.

Shadary cuts a paltry figure, and it is undoubtedly this weakness, coupled with his proven loyalty, that endears him to Kabila. Although Shadary has been a sometimes-feared enforcer of the regime (for which the European Union put him under sanctions), he has no popular political base of his own, and is unlikely to wrestle free from Kabila’s shadow. An ethnic Bangubangu from Maniema province, he is junior in the tribal structure to Kabila (whose mother is Bangubangu), and is also less popular in his own province than another local son, former Prime Minister Augustin Matata Ponyo. The Western sanctions on Shadary would also make it hard for him to play Kabila’s old game of pitting the international community against his benefactor once he comes to power.

Kabila also seems determined to stay in control of the ten thousand-strong presidential guard, most of whom are from his father’s Katanga region, and are more likely to keep Shadary hostage than to protect him. Kabila also recently consolidated his power by appointing allies to high-ranking military posts, and many in Congo suspect that his brother and sister, both of whom are members of parliament, might end up with strategic ministerial portfolios. All evidence indicates that Kabila wants to remain the ultimate arbiter of the political game, as suggested by his rather ironic official designation as “moral authority” of the majority. Recent declarations he has made to some Western media also point to his ambition to come back to the presidency before too long.

Kabila’s plan has only one huge drawback: Shadary is almost certain to lose a free and fair election. Not only does he barely draw 16 percent of support across the country in polls, but he is even unpopular among many members of the presidential majority – a largely transactional coalition of elites and parties that the regime maintains through massive patronage and corruption. Shadary’s campaign appearances draw smaller crowds than his opponents’, despite the state machinery at his disposal, his financial hand-outs to participants, and the near monopoly of state media in his favor. Recently he had to cancel an appearance in Tshikapa, Kasai province, as protests got out of control.

Two of Shadary’s most credible opponents, Jean-Pierre Bemba of the Equateur region and Moïse Katumbi of Katanga, have been banned from running by the regime-controlled electoral commission and superior court. But they have agreed with a few other luminaries to support the lesser-known candidacy of Martin Fayulu. A man of political integrity and courage, Fayulu hails from the swing province of Kwilu and had the support of only 8 percent of Congo’s voters before the opposition unified behind him. But he may now be able to add Bemba and Katumbi’s probable 40 percent of the electorate to his own.

In fact, the government seems to have greatly underestimated Fayulu, whose campaign has taken on unexpected momentum. Belatedly, Kabila’s regime seems to have realized its error, and is now doing all it can to sabotage his campaign and the integrity of the broader election process. Most recently, the government ordered the suspension of all political campaign events in Kinshasa on security grounds, just hours before a scheduled rally by Fayulu in Sainte-Therese Square. The government has also refused to authorize South African aircraft leased by Fayulu’s campaign to enter Congolese airspace, citing safety reasons (a newfound concern, given Congo’s dismal aviation safety record). The government has also repeatedly prevented Fayulu from landing in towns where he was scheduled to hold campaign meetings. Last week, security forces repeatedly fired to prevent Fayulu’s campaign procession from reaching a rally, forcing him to lie on the floor of his car for two hours and allegedly killing two of his supporters. The regime is also trying to pin blame on Fayulu for a warehouse fire in Kinshasa that destroyed a large number of voting machines. (It has not explained why Fayulu would wish to deflate the vote in the capital, which is a hotbed of the opposition.) Only Fayulu’s confusing message about electronic voting—which he first opposed and then acceded to this past week—could deflate his support on election day.

The rivalry between Kabila and Bemba-Katumbi through their designated candidates has somewhat eclipsed the campaign of Felix Tshisekedi of Kasai. Tshisekedi had initially supported the united opposition front, but bailed from the agreement after discovering that he would not be its candidate. Tshisekedi has the backing of the formidable machinery of the UDPS opposition party founded by his father Etienne, but he does not have the late man’s popularity or his firm hand over the party itself. Tshisekedi might garner 20 percent of the vote on his own, and might pick up another 10 percent from the supporters of Vital Kamerhe of South Kivu, a former Kabila ally who switched to the opposition in 2009 and has now thrown his support to Tshisekedi. This splitting of the opposition vote has made an opposition victory less certain – but it does not appear to have stopped Fayulu’s momentum.

It now only remains to be seen whether the elections will actually take place on December 23. Despite the regime’s reassurances that the election will proceed, the electoral commission seems woefully unprepared and the voting equipment is still a long way from being fully deployed across Congo’s territory. Moreover, the alleged warehouse arson, which destroyed some 8,000 voting machines in Kinshasa last week, does not help, and raises the worrying possibility that the government may cancel the elections on technical grounds – a possibility that becomes more likely if Shadary were to slip further and further behind in the polls, making it less and less possible for the government to credibly rig the vote.

If the government does cancel the elections, or if it dares to declare an improbable victory by Shadary, mob violence is likely. The regime seems to be banking on its ability to repress this violence – but it could be wrong. Indeed, four days before the poll, widespread disorder appears to be the most-likely outcome of Congo’s election.

But what is the best-case scenario?

It is true that many (though not all) of Congo’s opposition politicians are no better than the incumbents, and most are liable to collaborate with the regime at any moment for jobs and resources. From the point of view of Congo’s voters, the opposition is unlikely to provide the break of corruption and patronage that they have longed to see. From the point of view of democratic consolidation, however, a peaceful transition of political power at the ballot box holds real value. It could set the precedent that will determine Congo’s future.

Kabila’s desperate efforts to stop the European Union from renewing its sanctions against Shadary, and his regime’s irate reaction to their passage, shows how hungrily Congo’s government craves legitimacy and approval, despite all its posturing about sovereignty. Even as the elections devolve into a charade, we believe there is room for further pressure. After exploiting Congo for so long, the international community owes the Congolese people a more fulsome demonstration of support.

Pierre Englebert is H. Russell Smith Professor of International Relations at Pomona College and a senior fellow at the Atlantic Council’s Africa Center.

George Kasongo Kalumba is Assistant Professor of Political Sociology at the University of Lubumbashi. The views expressed in this article are those of the authors and do not necessarily reflect the views of the Atlantic Council, its staff, or its supporters.