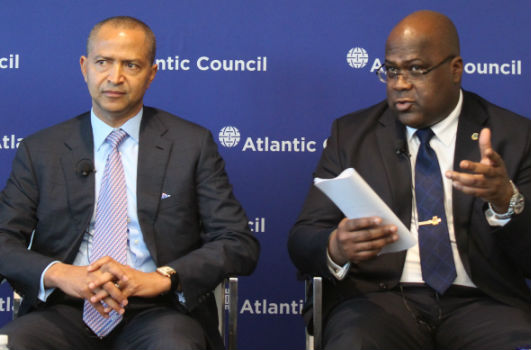 Democratic Republic of the Congo opposition leaders Moïse Katumbi and Felix Tshisekedi are on a US and European tour to lobby for further sanctions against the regime of President Joseph Kabila and for continued Western pressure towards free and fair elections, scheduled for December. They have formed an alliance which, they hope, can unite the opposition against the regime. But their strategy remains hampered by the apparent superficiality of their coalition and the likelihood that any election under the current regime will be flawed.

Katumbi, former governor of Katanga province and president of the coalition of former regime insiders Together for Change, would be the frontrunner if elections were held today (polling 24 percent as of March, according to a BERCI/Congo Research Group poll).  Tshisekedi (13 percent) recently took over the leadership of his late father’s Union for Democracy and Social Progress (UDPS). In contrast, only 6 percent of BERCI respondents said they would vote for Kabila, who has already exceeded the end of his term by eighteen months and is constitutionally banned from running for a third term, yet seems nonetheless gung-ho on finding a way to stay in power.

The two opponents, who participated in a May 23 roundtable at the Atlantic Council, made for an interesting study in contrast.  Asked about their programmatic goals, Katumbi generously evoked his record as governor of Katanga from 2007 to 2015, a time when the province’s economy surged and where his government made significant inroads in infrastructure development and resource mobilization. Devoid of any government experience, Tshisekedi astutely cloaked himself in the shroud of his late father and committed to working towards effective rule of law, democracy, administration, and justice. Tshisekedi’s father, Etienne, who died in 2017, had been the main opposition politician in Congo since his launch of UDPS in 1983 under the regime of former president Mobutu Sese Seko. Although he had a paltry record for his brief moments in office and can hardly be said to have practiced democracy within his own party, he is widely revered as a symbol of the Congolese struggle for democracy.

That the two politicians traveled and appeared together was already an achievement in the factious world of Congolese opposition.  They stressed at the Atlantic Council that their union was strong and stable and that their unity extended to Vital Kamerhe (9 percent in the BERCI poll) of the Congolese National Union (UNC) and Eve Bazaiba (3 percent) of the Movement for the Liberation of Congo (MLC), the party of Jean-Pierre Bemba (10 percent), who is still in detention in The Hague following his condemnation by the International Criminal Court. Altogether, the opposition polls at a cumulative 59 percent.

However, while such a united front (the two opponents repeatedly referred to each other as “brothers”) would represent a formidable force were elections to be free and fair, there is no formal agreement as of now as to which one of them would run. And if past experience is any indication, any such agreement is unlikely to happen or to last.  In 2011, for example, the opposition had to share its 51 percent of votes among ten candidates, while Kabila won with a (likely inflated) 49 percent. Moreover, the merging of the two campaigns appears so far only limited to their respective electoral experts (who recently met jointly with the International Organisation of La Francophonie team that audited the voter registry).

The issue of who might run is compounded by Katumbi’s legal problems—including a verdict of real estate fraud and an indictment for recruitment of mercenaries—which most serious observers deem fabrications by the regime.  The Congolese Episcopal Conference, which had been officially tasked with investigating these charges as part of the December 2016 power-sharing Saint-Sylvestre agreement, has judged them to be without merit and demanded that they be dropped to allow for peaceful elections.

To maintain such pressure on the regime and be allowed to return to Congo is a significant motivation behind Katumbi’s lobbying in the United States and his insistence that the Saint-Sylvestre accord, which the government has repeatedly flaunted or corrupted, be implemented. Yet, until it is (and it might never be), Katumbi is unlikely to return. As Katumbi said himself at the Atlantic Council, for him to go home might open repressive opportunities for the regime against his supporters. Most observers would also probably agree that it would physically endanger Katumbi himself.

Despite their current alliance, Tshisekedi would objectively benefit from Katumbi’s absence and the question of a unity candidate for the opposition would suffer little plausible alternative to him. It is doubtful, however, that the alliance would survive such an outcome, which is likely part of the regime’s calculations.

However, whether Katumbi returns and runs or not, the two opponents’ willingness to go to the polls is worth a challenge.  Why agree to elections that are already marred by an opaque voter registry, a controversial electronic voting machine, an electoral commission whose chair attends meetings of the presidential majority, and a supreme court recently stacked with regime loyalists?  Even if, somehow, Kabila ended up not running, what are the odds of an opposition victory in such a skewed environment?

In light of past Congolese opposition practices, including by Tshisekedi’s father under Mobutu, one could wonder whether a full-fledged political crisis in the wake of a deeply flawed election might create the conditions for some sort of national-unity government, which someone like Tshisekedi could lead. Such an arrangement (not unlike the Kibaki-Odinga deal in Kenya in the wake of the violent 2008 elections) could contrast with the current collaboration of UDPS defectors like Prime Minister Bruno Tshibala, who garners negligible popular support, and offer a more legitimate avenue to power for the opponent than would a similar role in the pre-election period.

The United States has repeatedly condemned the Kabila regime’s actions to stall and undermine peace and security in Congo and to delay the electoral process. A series of sanctions against designated individuals, most recently expanded in February, also exist. All indications point that the US administration may be willing to go further.

In the hopelessly muddled environment of Congolese politics, it can be hard for outsiders who care for the Congolese to know where to stand.  A strong commitment to enforcing the country’s own constitution, massively embraced by the Congolese in 2006 after five years of dialogue and thirty-two years of often nightmarish rule, should not be controversial, however.  Whether any successor can do better than Kabila is beside the point—it is, at bottom, the precedents of a genuinely fair election and alternation in the highest office that matter.

Dr. Pierre Englebert is the H. Russell Smith Professor of International Relations and Professor of Politics at Pomona College and is the author of “Congo Blues: Scoring Kabila’s Rule.”

Image: Democratic Republic of the Congo opposition leaders Moïse Katumbi (left) and Felix Tshisekedi (right) speak at the Atlantic Council on May 23, where they announced the formation of an opposition alliance which they hope can defeat the incumbent, President Joseph Kabila, whose term expired more than eighteen months ago.