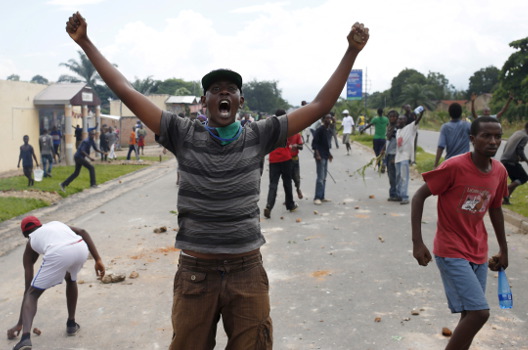 Embattled Burundian President Pierre Nkurunziza was in Dar es Salaam, Tanzania today for talks with the East African Community (EAC) about the political crisis in his country.

After more than three weeks of often-violent demonstrations in the capital against what protesters call an unconstitutional third term attempt by the sitting president, elements of the military took action today and launched a coup d’état.

The situation is fluid, and will likely remain so over the coming hours and even days. As events unfold and details emerge, however, three questions come to mind:

Did the coup succeed?

It is clear that a faction of the military—led by Major General Godefroid Niyombare—attempted a coup; it is not yet clear if it succeeded.

Burundi’s military—long considered a trustworthy and professional institution by the majority of Burundians—has remained neutral throughout the recent demonstrations. Last week, the Defence Minister declared that the military was not a political tool, and would respect both the country’s constitution and the Arusha peace agreement; protesters see today’s actions as proof of the military’s commitment to the good of the country, rather than the rule of one party.

But the institution is not a monolith, and there are pro-Nkurunziza elements inside the military. These elements are guarding Burundi’s broadcasting company, Radio-Télévision Nationale du Burundi, facing off against the rest of the military. Shots were fired into the air, but not at any civilians in the area.

Nkuruniziza’s opponents have nevertheless flocked to the streets of Bujumbura in celebration of the coup attempt.

Who is really in power?

Speaking on a private radio channel, Major General Godefroid Niyombare announced that President Nkurunziza had been deposed and that he was working with civil society to create a transition committee. In an appeal for peace, he urged all to “respect the lives and property of others.” The former rebel commander-turned-intelligence chief was close to the leadership of the ruling party until February of this year, when he was fired in what many consider was a political purge.

The country’s opposition did not appear to know about the coup and seem uninvolved. Burundian police forces, considered hardline loyalists and instigators of recent violence against protesters, have largely stood by as protesters celebrate Niyombare’s announcement.

The largest potential spoilers to the current situation are the police and ruling party youth militias. These groups, should Nkurunziza truly be out of power, stand to lose everything and may resort to violence out of anger or desperation.

The president’s office has disputed reports of the coup’s success, noting that the majority of Burundi—particularly outside of the capital—remains peaceful.

How will the international community react?

The EAC meeting, billed as a landmark gathering of leaders dedicated to finding a peaceful solution to Burundi’s political crisis, has stalled as all parties attempt to understand what is happening inside Burundi. If Nkurunziza is indeed en route back to Burundi, as the Tanzanian government announced, he will be leaving the EAC emergency meeting—to which the US dispatched Assistant Secretary of State for African Affairs Ambassador Linda Thomas-Greenfield—in disarray. EAC leaders will reconvene in two weeks.

Setting aside the legality of a third term, it is worth emphasizing that Nkurunziza’s current term does not conclude until after the June 24 presidential elections. The military’s seizure of power before the end of the president’s legal term violates the constitution and could result in international sanctions.

Similar events in Burkina Faso last year, for example, led to an ultimatum from the African Union demanding that the military hand power to a civilian transition council or face sanctions. As a result, a transition government assumed power, though it included military members. Whether that transition is successful remains to be seen.

The United States has already threatened targeted sanctions on individuals who participate in election-related violence in Burundi and may be forced to suspend more than $14 million in military assistance to Burundi if the coup succeeds; Belgium yesterday halted funding for police training after violent clashes between police and protesters.

Niyombare has reportedly closed Burundi’s borders and its international airport (the latter is controlled by troops loyal to him), and thousands of protesters clog the streets to and from the airport. At the same time, Nkuruniziza is rushing to return to the country, to instill order and show that he is still in control.

The next words and deeds of both Nkurunziza and Niyombare will thus be closely scrutinized, both for Burundi’s future, and for that of the region.

Image: A man gestures during a protest against Burundian President Pierre Nkurunziza's decision to run for a third term in Bujumbura, Burundi May 13, 2015. A Burundian general said on Wednesday he had deposed Nkurunziza for seeking an unconstitutional third term in office, and was working with civil society groups to form a transitional government. REUTERS/Goran Tomasevic