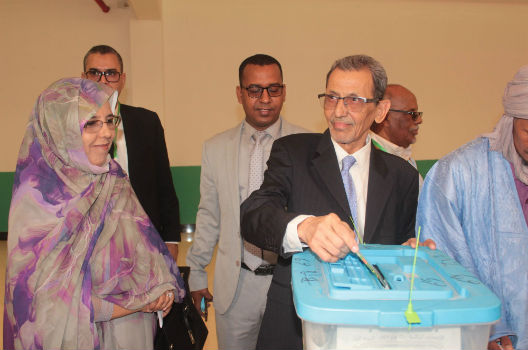 Mauritania’s June 22 presidential election marked the country’s first democratic transfer of power since independence. The ruling party’s Mohamed Ould Ghazouani won with 52 percent of the vote, and his closest challenger, Biram Dah Abeid, received 18 percent. But the election was less of a landslide than the vote totals imply: Ghazouani surpassed the 50 percent threshold needed to preclude a second round by less than 19,000 votes (out of 929,285 valid votes cast), and it appears likely that his competitors would have all supported Abeid in a runoff. Thus, the ruling party had a close call, and the opposition’s claim that electoral fraud and irregularities altered the outcome is worth assessing.

Background and Election Conduct
Mauritania is a West African, Sahelian country that has been ruled by President Mohamed Ould Abdel Aziz since he took power in a 2008 coup d’état. Facing internal pressure from his ruling party, Aziz agreed to abide by term limits and step down, but his hand-picked replacement Mohamed Ould Ghazouani was widely viewed as a continuity candidate. Ghazouani’s main competitors in the election were Biram Dah Abeid, an anti-slavery activist, and Sidi Mohamed Ould Boubacar, who led a transitional government between 2005 and 2007 and was endorsed by Mauritania’s Islamist party Tawassoul.

Election day passed peacefully and relatively without incident. Observers praised the general conduct of the polls, but their presence was minimal, despite opposition requests. Only the African Union was allowed to monitor the election, and its team arrived only three days before the poll, missing all but one day of the campaign. The opposition, in an election day press conference, cited voting “irregularities” and instances of their party observers being barred from polling stations in several ruling party strongholds, but the court validated the election on July 1, leaving no room for further appeals.

In the aftermath of the election, tensions rose. Ghazouani preemptively declared himself the winner early Sunday, June 23, before the election commission’s announcement later that day. This prompted confrontations between protesters and police in the capital, and the country’s Internet was shut down between Sunday afternoon and Friday, June 28. On Monday, June 24, the offices of two opposition candidates were raided and closed, including that of runner-up Biram Dah Abeid. In statements on Tuesday, June 25, the government confirmed the arrest of one hundred protesters.

Amid these events, the election commission should be applauded for releasing results from the country’s 3,861 polling stations following opposition requests. This level of transparency has been absent from prior elections, and it is this dataset that forms the basis of this article’s subsequent analyses.

Assessing Claims of Fraud
The opposition has brought forth claims of overvoting. According to the published results, twelve polling stations had turnout of 100 percent or above, totaling 2,924 votes, of which 94 percent went to Ghazouani. Though the magnitude of these cases is small (less than 0.3 percent of votes cast), and thus would not affect the outcome alone, these results are clearly irregular and merit investigation. The election commission should be called on to explain these cases and to confirm that they are not symptomatic of a broader trend.

The opposition’s main argument appears to be just that: that overvoting in favor of Ghazouani was pervasive. The opposition casts doubt on the credibility of results from 455 polling stations in which it claims turnout was over 90 percent, suggesting that if these results were annulled, a second round would be required. However, according to the released data, only 68 polling stations had over 90 percent turnout, and it appears the 455 number refers to stations in which Ghazouani received more than 90 percent of the vote. This is an important distinction, as high vote counts for Ghazouani are not overly suspicious in their own right.

Instead, researchers have identified that ballot stuffing may be present in cases where “[u]nusually high vote counts tend to co-occur with unusually high turnout numbers.” This can be visualized by plotting Ghazouani’s cumulative vote share as a function of polling station turnout, seen below. The pronounced uptick for Ghazouani once polling station turnout surpassed 82 percent (circled on the far right) appears to be anomalous, as higher turnout seemed otherwise to relatively favor the opposition, and thus could suggest ballot stuffing at the margins. The election commission should investigate this possibility. However, the magnitude of this potential fraud would be well below what the opposition suggests, and it is unlikely that ballot stuffing in this subset of high turnout polling stations could have swung the result on its own.

Null Votes
Null votes in the presidential election were unremarkable, with totals of 2-4 percent spread across regions. It is worth noting, though, that the magnitude of null votes was significantly higher in past legislative, municipal, and even referenda polls. Null votes in the 2018 legislative election totaled 185,000 (18 percent of votes cast), with null votes in one administrative sub-region as high as 37 percent. While this discrepancy in the magnitude of null votes is stark, comparative analysis of past election data does not support foul play. Standardizing the level of null votes, the relative distributions are consistent across elections, suggesting that differences across regions may be related to more functional explanations.

Specifically, the difference in magnitude across elections is likely the result of more complex legislative and municipal ballots, and the uneven distribution across regions is at least partially explained by higher illiteracy rates in several southern regions of the country. This includes regions of high opposition support, where some Afro-Mauritanians feel disenfranchised. Thus, functional issues of ballot design and regional literacy matter and should be the subject of subsequent voter education and technical assistance programs. Lack thereof may have effectively disenfranchised up to 10 percent of registered voters in the 2018 legislative election, disproportionately affecting opposition areas.

Opposition Competitiveness
A reasonable question could be, why all this analysis for an election in which first and second place were separated by 34 percent? The answer is that a two-candidate second round could have been very competitive, and it was only avoided by 19,000 votes. Four of Ghazouani’s five competitors from the first round, making up almost 48 percent of the vote, closely cooperated to protest the results, and a joint election petition was submitted. These actions suggest that there would have been a united front behind Abeid in a second round.

It is also possible that the prospect of a competitive second round could have mobilized more voters. Higher turnout relatively favored the opposition, as discussed above, and while turnout in the presidential (63 percent) was lower than the 2018 legislative election (73 percent), valid votes went up in most opposition regions, compared to ruling party areas that failed to reach Aziz-era levels of turnout. Thus, between turnout trends and opposition unity, the ruling party would have faced a real test in a second round.

Concluding Remarks
Overall, Mauritania’s election delivered some very positive precedents: respect for term limits, a democratic transfer of power, improved data transparency, and peaceful contestation. The United States and others are right to applaud such conduct. However, there are areas for improvement that should not be overlooked and several anomalies in the data that require further investigation. This article concludes with recommendations to the relevant stakeholders.

To the election commission:
The election commission should be congratulated for running a relatively smooth election and for releasing polling station level data. Further efforts should still be made to investigate and explain instances of overvoting, exceedingly high turnout, and null vote discrepancies. Emphasis must also be placed on voter education, especially in southern regions of the country where illiteracy is high.

To the ruling party:
Foremost, President Aziz should be applauded for abiding by term limits. Improvements can be made in post-election conduct. The opposition and media must be provided space to review and contest the results, and restraint must be shown when releasing statements before results are official. The government should also make allowances for more international observers.

To the international community:
Countries would be best served by waiting until all election cases and disputes are settled before congratulating the winner. Early congratulatory statements by the likes of France, Morocco, and Saudi Arabia threatened to undercut Mauritanian processes for legal contestation.

Luke Tyburski is a project assistant with the Africa Center.