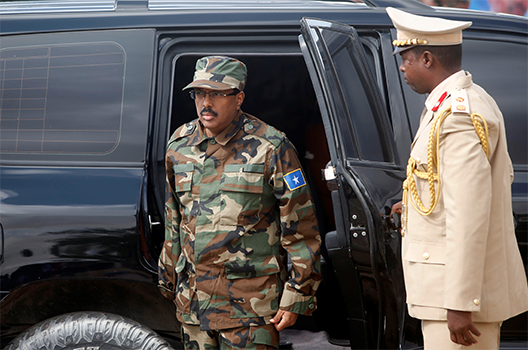 The recent statement from the United States Africa Command (AFRICOM) that American forces had carried out an airstrike destroying an al-Shabaab truck bomb near Jana Cadalle in southern Somalia on April 11 was the third time this month that the US military is reported to have hit the terrorist group in the East African country. While AFRICOM stressed that the action—and the eight other airstrikes that it has acknowledged since the beginning of this year alone—was taken “in coordination with the Federal Government of Somalia” (FGS), the truth is that this heightened operational tempo in response to the ongoing threat from the al-Qaeda-linked al-Shabaab as well as a smaller ISIS-affiliated group only underscores the ongoing weakness of the internationally-recognized Somali regime.

While it is imperative to keep up military pressure on the militants, ultimately insurgencies like Somalia’s can only be defeated by political legitimacy—and, as I pointed out late last year, this is one test that, more than a quarter of century after the collapse of the last central government to really exercise sovereinty over the country, the authorities in Mogadishu still struggle to achieve a passing grade on: recall that the FGS’s own auditor estimates that $20 million changed hands in the process that led to the establishment of the current administration in February 2017, a fact that does not exactly stir patriotic adherence to or otherwise bolster the regime’s credibility with ordinary Somalis.

Protected in the seaside capital by the 22,000-strong military force of the African Union Mission in Somalia (AMISOM)—made up of troops from Burundi, Djibouti, Ethiopia, Kenya, and Uganda whose salaries are paid by the European Union and whose operations are supported by a United Nations logistical package and various bilateral donors led by the United States—Somalia’s political elites wile away their time in internecine power struggles. Earlier this month, the speaker of the country’s parliament, Mohamed Osman Jawari, was forced to resign ahead of a no-confidence vote, after losing out in a fight with President Mohamed Abdullahi Mohamed, a.k.a. “Farmajo” (from the Italian formaggio, or cheese) a dual US-Somali national who worked as a Buffalo-based diversity contracting officer for the New York State Department of Transportation in between stints in politics. At least this standoff was resolved without recourse to physical violence: just a week before, parliamentary police loyal to the speaker squared off against state security forces aligned with the president in the legislative chamber itself, necessitating an intervention by Ugandan Brigadier Paul Lokech and AMISOM troops under his command to separate the combatants.

Amid this political infighting, extremist Islamist elements—including veterans of some of al-Shabaab’s predecessor groups or fellow travelers such as al-Itihaad al-Islamiya (AIAI), the Islamic Courts Union, and al-Islah—have begun to coalesce around a new banner, “al-Citisam” (“those who seek protection” [from God]), with support from certain segments of the FGS. During a trip to the region last month, a well-placed senior African interlocutor with years of diplomatic and intelligence experience in Somalia shared with me a dossier that suggests that al-Citisam’s reach may go as far as President Farmajo’s chief of staff, Fahad Yasin. From what I learned, Yasin—who, prior to his entry into politics as the manager of Farmajo’s successful bid for the presidency last year, worked for Doha, Qatar-based Al Jazeera’s Arabic-language channel as a correspondent—has links to several prominent figures in AIAI, which has been designated a terrorist group by the US State Department under the USA PATRIOT Act.

A respected Horn of Africa researcher summarized al-Citisam in this way: “It is garnering broader alliances of businessmen and clerics, and this had produced telling jokes in Mogadishu: ‘al-Shabaab with money is in the making and delivered al-Citisam,’ and the group is stealthily trying to capture the state… The importance of al-Citisam lies in the fact that it has the capacity to become a force to be reckoned with quickly, progressively assuming the upper hand among the rank and file of the [Somali Federal Government], although the group’s target is the 2020 elections in Somalia… The whole plan is designed in such a way as to constitute the core of the [Somali National Army, SNA]… When the full training and organization of these [first] 1,000 soldiers is completed, they will take over the running of the security of Villa Somalia… Following the adjustment of Villa Somalia’s security arrangements, the next batch of 1,000 soldiers consisting of [former] al-Shabaab operatives will deal with the security of the city.” According to this analyst, recruitment for this plan is being overseen by a committee headed by Sheikh Abdullahi Ahmed Omer, formerly of Jabhatul Islamiya (a.k.a, the Somali Islamic Front, JABISO), a group that merged into the Hizbul Islam insurgency during the Ethiopian intervention in Somalia in 2006.

All this is taking place under the very nose of President Farmajo—perhaps even with his tacit approval. It is worth recalling that Farmajo’s 2009 master’s thesis at the State University of New York at Buffalo not only claimed that the genocidal Siad Barre regime had “won the hearts and minds of the people by promoting a new self-reliance and self-supporting mentality” and lamented the dictatorship’s ignominious collapse as “another unfortunate page in an unfortunate epoch,” but described US policy in the region as “failed” while slavishly praising then-Somali President Sharif Sheikh Ahmed, an Islamist, as “the very best person for today’s Somalia.”

This is the context which perhaps sheds some light on an otherwise obscure set of recent developments. On April 8, Somali officials stopped an airplane at Mogadishu’s Aden Adde International Airport carrying forty-seven military personnel from the United Arab Emirates (UAE). According to a statement from the UAE’s Foreign Ministry, the Emirati personnel were held at gunpoint and assaulted, while a large amount of cash meant “to support the Somali army and trainees and pay their salaries” was seized (the Associated Press reported that the funds totaled $9.6 million). A week later, on April 14, in the northern port city of Bosaso, another Emirati plane, this one carrying trainers for the maritime police force in the semi-autonomous Puntland region, was detained before it was eventually allowed to depart.

Since 2014, the UAE has provided military and police counterterrorism trainers for Somalia and pays the salaries of some 2,407 Somali soldiers (roughly 10 percent of the SNA’s official payroll, although a significantly higher proportion of its deployable effectives). In addition, the Emirati government and charities underwrite various aid projects, including the Sheikh Zayed Hospital in Mogadishu (named for the UAE’s founding president, the late Sheikh Zayed bin Sultan Al Nahyan), which opened in 2015 and has since provided free treatment to hundreds of patients daily. The UAE is also, after Saudi Arabia and Oman, the largest market for Somalia’s primarily agricultural exports, especially livestock and hides. Dubai-based DP World is also committed to investing $442 million in a joint venture with the government in the Somaliland region to manage and develop a multi-use port in Berbera, on the Gulf of Aden, one of the largest natural deep harbors on the African continent’s eastern littoral. (The government of Ethiopia acquired a 19 percent stake in the project in March 2018, planning to make Berbera the gateway for an inland infrastructure corridor.)

In response, the UAE announced on April 15 that was ending its military-training mission, which up to now has trained thousands of Somali soldiers and police at three training centers that it also constructed. According to the Foreign Ministry in Abu Dhabi: “The decision comes in response to Somali security forces’ seizure of a UAE-registered civil aircraft at Mogadishu Airport and confiscation of money destined to pay the soldiers… The UAE has expressed its denunciation of the seizure incident which flies in the face of diplomatic traditions and ties between world countries and contravenes the agreements signed by both countries.”

On April 21, Somali officials formally took over what had until just days before been the UAE-run training center in Mogadishu (SNA chief Abdullahi Ali Anod claimed that the government will turn the facility into a military academy, although he did not explain how it was going to pay for the transformation). As if on cue, al-Shabaab militants launched a heavy assault in the early hours of April 22 against the army barracks in the capital’s Warta Nabada (formerly Wardhigley) district, home of the Villa Somalia presidential compound and the parliament building. While the attack was repulsed with some casualties, that it could take place in the heart of Mogadishu, a city from which the insurgents were driven more than six years ago by AMISOM, only underscores how badly the FGS forces need the training and support that they won’t be getting any more from the Emirati mission—for whose absence the thirty buses donated by the government of Qatar after Mogadishu’s rupture with the UAE won’t quite make up.

What has transpired is that the diplomatic conflict between Qatar and the other members of the Gulf Cooperation Council—especially Saudi Arabia, the UAE, and Bahrain—has spilled over into a proxy conflict in the Horn of Africa. That much could have been anticipated, but what is both surprising and, from the point of view of the United States and other allies, more worrisome, is that the FGS has apparently taken sides. Moreover, Mogadishu’s choice appears to be driven, in some measure, by a cabal within the already-fragile regime with a clear Islamist agenda—as if the very real threat of terrorism in and from Somalia were not more than enough to be concerned about.