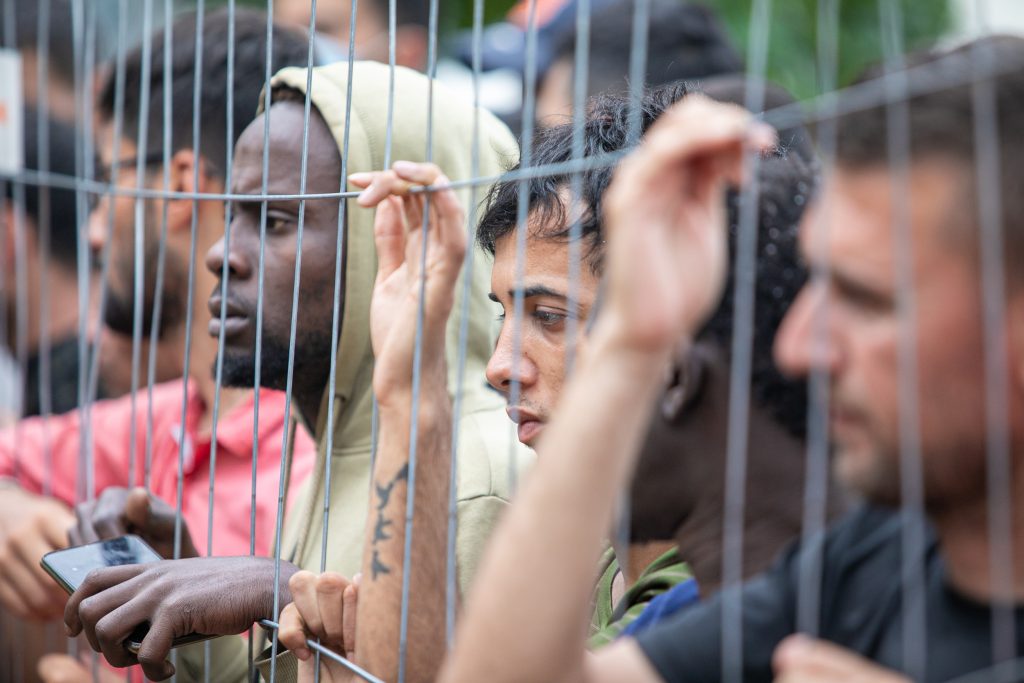 The crisis on the Belarusian-Lithuanian border is escalating as Belarus dictator Alyaksandr Lukashenka’s autocratic regime continues to weaponize migrants from the Middle East against Europe. And with joint Russian-Belarusian Zapad-2021 military exercises just three weeks away, Western defense officials are increasingly on high alert.

On August 9, NATO Secretary General Jens Stoltenberg vowed that the Western alliance would closely monitor what he called Belarusian “hybrid activities” against Lithuania. German Chancellor Angela Merkel has called Lukashenka’s actions “an attack on all of us in the European Union.” And following an August 17 meeting, EU interior ministers preliminarily agreed to provide Lithuania with additional funding and border officers, RFE/RL reported.

But it was Latvian Foreign Minister Edgars Rinkevics who made explicit the combustible combination that Lukashenka’s manufactured migrant crisis and the looming Zapad-2021 exercises present. “You have a border crisis, you have a major military exercise going on at the borders of Nato countries, you also have increased presence on our side, the Lithuanian side, Estonian side, and Polish side, of border guards and military formations. Of course, this is increasing the possibility of incidents,” Rinkevics said in a recent Financial Times interview.

Riho Terras, a member of the European Parliament who previously served as Commander of the Estonian Defense Forces, suggested that Lithuania invoke Article 4 of the NATO Charter, which calls for consultations when an alliance member is under threat. “Involving NATO is the only right course of action here,” he said.

The German weekly Spiegel published an investigative report this week in collaboration with the London-based Dossier Center, shedding light on how the Lukashenka regime has manufactured the crisis on the Lithuanian border. According to the report, two Belarusian travel companies, the state-run Tsentrkurort and the Minsk-based Oskartur, facilitated visas and travel to Minsk for Iraqi asylum seekers. Once in Belarus, they were transported to the border where smugglers and Belarusian border guards helped them cross illegally into Lithuania.

According to Lithuanian border authorities, 4,115 illegal migrants, mostly from Syria and Iraq, have been detained so far this year. In contrast, just 81 were intercepted last year, 46 in 2019, and 104 in 2018. There are also reports of migrants arriving from Belarus at the Polish and Latvian borders, Spiegel reported.

Additionally, Lithuania’s Deputy Foreign Minister Mantas Adomėnas stated recently that Russian nationals were among those attempting to illegally cross the Lithuanian border. “We had a dialogue with the Russian representative because Russian citizens are also crossing the border,” Adomėnas told Ekho Moskvy.

Writing on his blog, veteran Russia-watcher and former US State Department official Paul Goble noted that reports of Russian nationals among the illegal migrants “suggests that Russia may be an active participant in Lukashenka’s stratagem, something that few have considered up to now.”

Goble added that this “almost certainly means Moscow is exploiting the situation for its own purposes to create problems for Lithuania, a NATO and EU member and a leading critic of Russia’s repressive and aggressive policies, by highlighting Vilnius’s difficulties in coping with the crisis and by using the larger Middle Eastern flow to cover the insertion of Russian illegals.”

Lukashenka’s manufactured migrant crisis on the Lithuanian border, and the allegation that Russian nationals are also being smuggled into Europe under its cover, would be alarming on its own. These developments are additionally destabilizing coming in the run-up to the quadrennial Zapad joint military exercises, which will see 12,800 troops, including 2,500 from Russia, training in Belarus from September 10-16.

According to Rochan Consulting, which is tracking the runup to the exercises on its blog, the Russian troop presence will likely exceed the announced 2,500 and Zapad-2021 “will be bigger compared to 2013 and 2017. Perhaps the biggest exercise in the Western Military District since 1999 when the first post-Cold War Zapad was conducted.”

The largest joint Russian-Belarusian military exercises in more than two decades are set to take place amid a manufactured, albeit very real, crisis on the Belarusian border with NATO and the EU. These exercises comes at a time when Russia is steadily expanding its political, economic, and military footprint in Belarus. And they are happening as Moscow continues to station troops in Russian border regions close to Ukraine, ostensibly to prepare for Zapad-2021.

It has already been a hot August in Belarus. And September promises to be even hotter.

Image: Illegal immigrants pictured on August 5 at a camp close to Vilnius in Lithuania after crossing the border from Belarus. (15min/Scanpix via Reuters Connect)