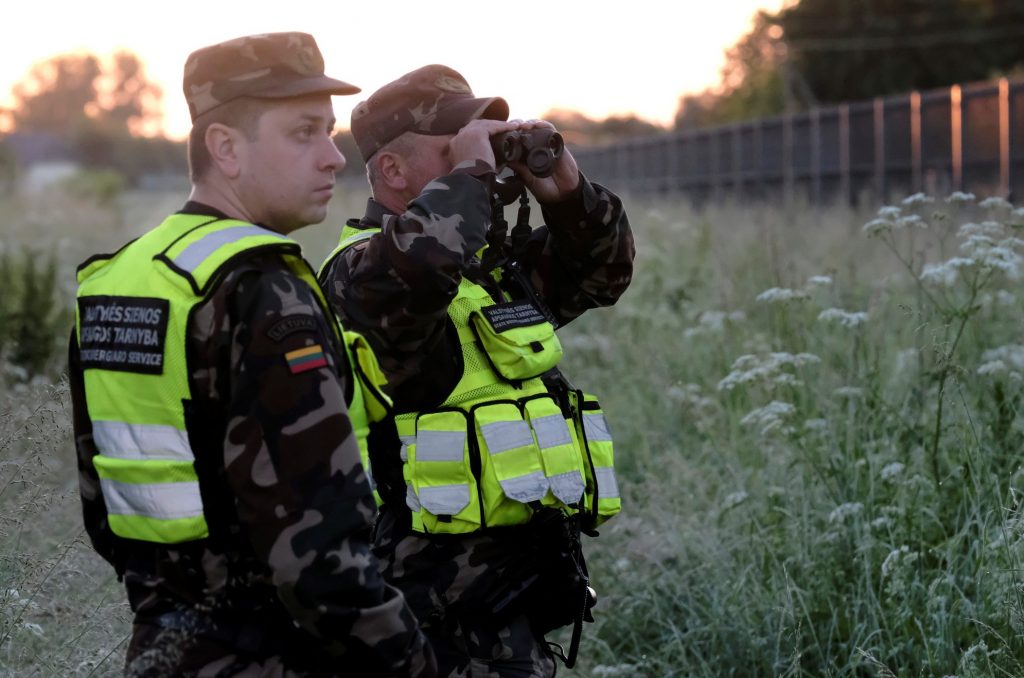 When Belarus moved to sever its ties with the European Union this week, recalling its envoy to Brussels and suspending participation in the EU’s Eastern Partnership program, the move was purportedly a response to the harsh sanctions the bloc recently imposed on Minsk.

But in reality, it was the latest stage in the low-intensity campaign of hostile actions being waged by Alyaksandr Lukashenka’s authoritarian regime against Belarus’s European neighbors.

In an interview on June 27, Lithuanian Interior Minister Agne Bilotaite accused Belarusian officials of orchestrating a surge of migrants from Iraq, Iran, and Syria into Europe via Belarus, calling the effort a “well-organized” plan and a form of hybrid warfare.

“We really have evidence of the involvement of Belarusian border guards in this process, this is a fact. This is an organized activity, a certain scheme. It is well-organized, planned,” Bilotaite said, adding that the operation was a “profitable crime involving the regime and the officials themselves.”

According to Bilotaite, the number of people caught illegally entering Lithuania this year is already seven times more than in 2020 and 12 times higher than in 2019.

And here’s the thing. Belarusian officials are not even bothering to deny it. Speaking in Brest close to the Polish border on June 22, Lukashenka announced that the Belarusian authorities would cease preventing immigrants from illegally passing into Lithuania, Latvia, and Poland.

“They are wailing that Belarus is not protecting them. Thousands of illegal immigrants are rushing into Lithuania, Latvia, and Poland,” Lukashenka said, mocking his western neighbors.

On May 28, Belarusian prosecutors opened a criminal case against Latvian Foreign Minister Edgars Rinkevics and Riga Mayor Martins Stakis after they replaced the current Belarusian state flag with the historical Belarusian red-and-white national flag during the World Ice Hockey Championships in Riga. Over the past eleven months, this red-and-white flag has been widely adopted as a symbol of anti-regime protests. Belarus accused Rinkevics and Stakis of “desecrating Belarusian state symbols” and “inciting national hostility on the basis of national identity.”

A confidential unpublished report this week by the Minsk-based Center for Strategic and Foreign Policy Studies noted that as the Lukashenka regime “attempts to find ways to put pressure” on its western neighbors, the Belarusian Prosecutor General’s Office and the Investigative Committee “may become significant players in the field of Belarusian foreign policy.”

In his June 22 speech in Brest, Lukashenka said Belarus has “been at war for a long time” and that “over the past year, we have experienced the most advanced hybrid warfare technologies.”

In a commentary for Belorusskiy Partizan, political analyst Valery Karbalevich noted, “Lukashenka first began to scare people with talk of a possible war with the West” following the disputed election in August 2020. He added, however, that “with the introduction of sectoral sanctions by the EU and the US, this rhetoric has acquired a new meaning. By intimidating the people with war, Lukashenka seeks to artificially create the impression of a ‘besieged fortress’ in order to justify political repression, to mobilize the country’s elite, and to encourage his supporters to defend the regime.”

Lukashenka’s openly hostile stance represents a major departure from recent Belarusian foreign policy. Not so long ago, the Belarus dictator went out of his way to reassure neighboring countries that they had nothing to fear from Minsk.

Following Russia’s 2014 annexation of Crimea and armed intervention in eastern Ukraine’s Donbas region, Lukashenka said he would never allow Belarusian territory to be used to attack another state. In the run-up to the joint Russian-Belarusian Zapad-2017 military exercises, he repeatedly pledged to his neighbors that the drills would not become a platform for mischief.

Belarus even invited observers from seven countries (Ukraine, Poland, Lithuania, Latvia, Estonia, Sweden, and Norway) as well as representatives of the UN, the OSCE, NATO, and the Red Cross to monitor the portion of the Zapad-2017 exercises that was taking place on Belarusian territory.

Lukashenka’s changing tone could have serious implications for regional security. In a televised interview on June 14, Lithuanian President Gitanas Nausėda warned that Belarus “is losing its last elements of independence, and could be used in the hands of Russians as a weapon for aggressive activities towards NATO allies.”

With September’s Zapad-2021 military exercises involving Russian and Belarusian forces just months away, the summer season promises to be a tense period on Europe’s eastern front.

When the US, EU, Canada, and UK announced a new Belarus sanctions this week, one name in particular stood out: Russian businessman Mikhail Gutseriyev.