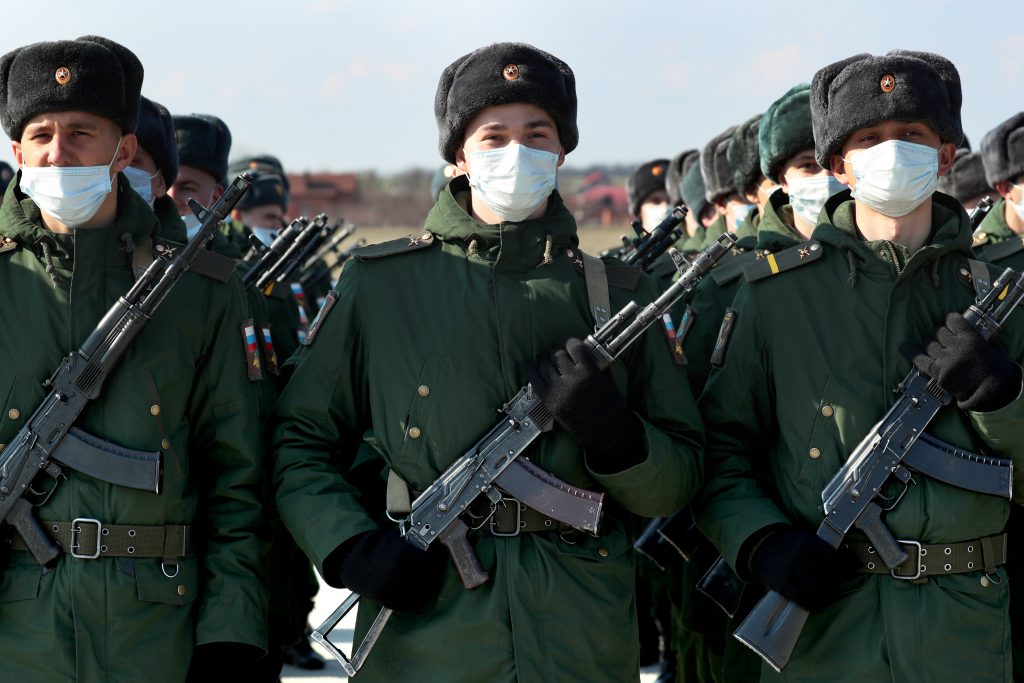 It turns out that Russia isn’t the only country massing troops on Ukraine’s border.

In addition to the large Russian buildup that has gotten the world’s attention in recent weeks, reports surfaced earlier this month that Belarus was also deploying forces and military hardware to its Ukrainian frontier in a manner that appears to be coordinated with Moscow’s actions.

Julian Ropcke, a reporter with the German mass-circulation daily Bild, has been meticulously tracking how Russia has been moving large amounts of troops to the Ukrainian border and augmenting its already robust force posture in Ukraine’s annexed Crimean peninsula.

On April 1, Ropcke tweeted out photos of BTR-80 armored vehicles, military trucks, and other large Belarusian military hardware traveling south through Belarus approximately 60 kilometers from the country’s border with Ukraine.

Reports of growing Belarusian military activity in areas close to the Ukrainian border come as Russia expands its military, political, and economic footprint in Belarus and amid a sharp deterioration in what were once friendly relations between Minsk and Kyiv.

Russia and Belarus have scheduled a record number of military exercises this year, culminating with the massive Zapad-2021, which is set to take place in September. The exercises are resulting in a constant rotation of forces which, according to military analyst Michael Kofman of the CNA Corporation, effectively establishes a de facto permanent Russian military presence in Belarus. That presence will be enhanced by a new joint training center that will be established in the Grodno region of western Belarus.

Earlier this month, Ukraine’s Deputy Prime Minister Oleksiy Reznikov announced that his country would no longer participate in peace talks with Russia in Minsk. Since 2014, the Belarusian capital has been hosting negotiations to find a diplomatic solution to the war in the Donbas.

“Belarus is under the influence of the Russian Federation and there is no trust for us in this territory,” Reznikov said, adding that currently “anti-Ukrainian rhetoric” dominates in Belarus.

The in-person meetings of the Trilateral Contact Group on Ukraine, which includes representatives of Ukraine, Russia, and the OSCE, have been suspended since early 2020 due to Covid-19 restrictions. When they resume, Ukrainian officials now say they want to see meetings moved to a neutral non-NATO country such as Sweden or Austria.

The Belausian Foreign Minister ridiculed the Ukrainian announcement and echoed a perennial Kremlin talking point by suggesting it was an indication that Kyiv did not intend to comply with the terms of the 2015 Minsk ceasefire agreement.

This all marks a sharp departure from how Belarus dictator Alyaksandr Lukashenka had previously been positioning himself vis-a-vis both Ukraine and the West in the aftermath of Russia’s 2014 annexation of Crimea and armed intervention in the Donbas.

In hosting the initial Minsk peace talks in September 2014 and February 2015, which included the leaders of Ukraine, Russia, Germany, and France and resulted in the current shaky ceasefire agreement, Lukashenka tried to position himself as an honest broker between Moscow and Kyiv.

Lukashenka pointedly refused to recognize Crimea as part of Russia and even ridiculed Moscow’s logic justifying the annexation, saying that Mongolia could just as easily lay claim to large swaths of Russian territory.

He also carved out a neutral stance on the war in the Donbas. In a clear reference to Ukraine, Lukashenka claimed he would never allow Belarusian territory to be used to attack another state, and made it clear that Belarus isn’t interested in being part of Putin’s so-called “Russian World.”

On the sidelines of the February 2015 peace talks in Minsk, a live microphone picked up a conversation between Lukashenka and the then Ukrainian President Petro Poroshenko, who were talking about Putin. “He’s playing a dishonest and dirty game,” Poroshenko said of the Kremlin leader. Lukashenka nodded sympathetically, replying, “I know, I know. Everybody realizes this.”

Bilateral relations were so warm at around this time that when the Ukrainian and Belarusian national soccer teams played each other in Lviv in September 2015, their fans marched out together under banners reading “For Your Freedom And Ours” and “A Brotherhood Of Conscience.” They also belted out chants deriding Putin and gave blood together for wounded Ukrainian soldiers.

Everything changed as a result of the deeply flawed 2020 Belarusian presidential election, which sparked unprecedented anti-regime protests across Belarus and forced Lukashenka to become increasingly dependent on Putin.

Despite the fact that Lukashenka lacks popular support for this pro-Moscow direction, he has effectively, and apparently enthusiastically, turned his country into another front in Putin’s war against Ukraine. As the international community monitors Russian military activity along Ukraine’s eastern border, they must now also keep a keen eye on the northern frontier with Belarus.