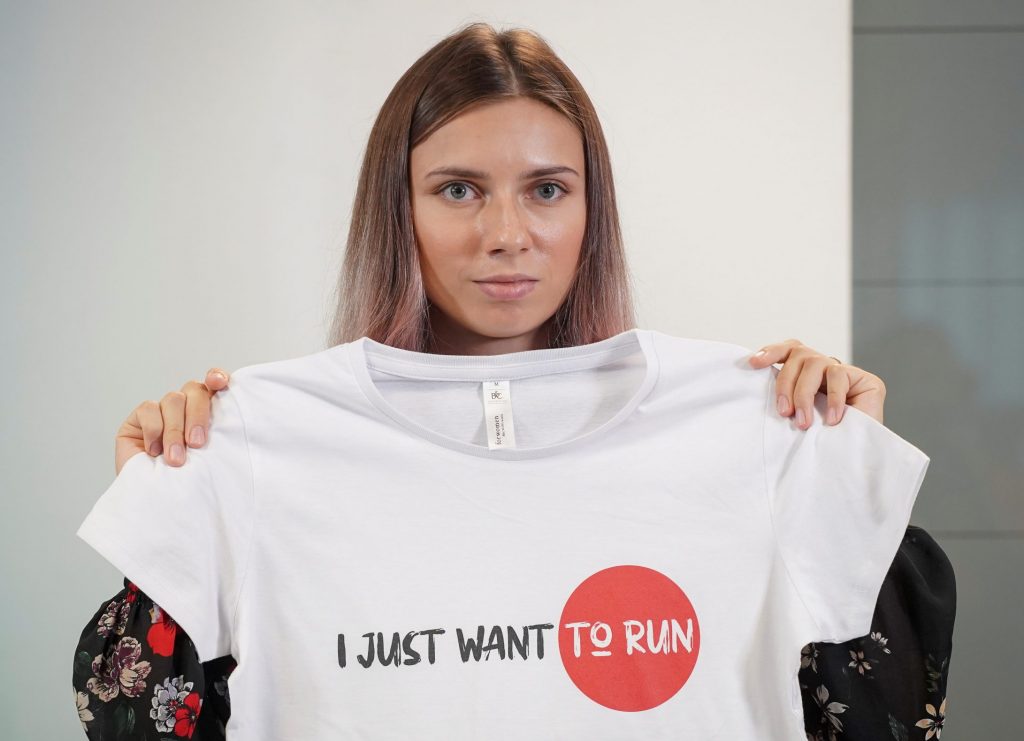 Belarus dictator Alyaksandr Lukashenka’s heavy-handed crackdown on all forms of domestic criticism was thrust into the international spotlight during the Tokyo Olympics when one of his country’s star athletes refused orders to fly home early and instead fled to Poland citing concerns for her personal safety.

Fearful of possible arrest and imprisonment in Belarus, Tsimanouskaya appealed to Olympic officials and Japanese law enforcement, calling on them to intervene and prevent her forced repatriation. Amid dramatic scenes reminiscent of the Cold War era defections of Soviet athletes, Tsimanouskaya was eventually able to secure a humanitarian visa and relocate safely from Japan to Poland. She arrived in Warsaw on August 4.

Meanwhile, the fallout from the incident continued in Japan. The International Olympic Committee confirmed on August 6 that two members of the Belarusian delegation, Artur Shimak and Yury Maisevich, had been stripped of their accreditation due to their roles in the attempt to send Tsimanouskaya back to Belarus against her will. Both men reportedly left the Olympic Village following the disciplinary measures.

While international coverage of the drama has been overwhelmingly sympathetic towards Tsimanouskaya, the sprinter was soon branded a “traitor” by regime propagandists in her native Belarus and became the target of a hate campaign in the state-run media. As the backlash mounted, Tsimanouskaya’s husband also felt obliged to leave Belarus to avoid possible persecution at the hands of the authorities.

The Tsimanouskaya scandal highlights the climate of fear in today’s Belarus and the all-pervading nature of the ongoing crackdown against any perceived criticism of the Lukashenka regime. It underlines the damage done to Belarusian society over the past year by the often brutal methods employed to suppress an unprecedented pro-democracy movement demanding change following 27 years of authoritarian rule.

Many of Belarus’s leading sporting institutions have been caught up in efforts to silence dissent. The Belarusian Athletic Federation (BAF), which oversees the performance of Belarusian athletes at the Olympics, has experienced a number of recent politically-motivated changes in leadership. Former BAF head Vadzim Dzevyatousky was reportedly detained and badly beaten by the Belarusian security services last year during the early stages of pro-democracy protests which erupted in the wake of the country’s deeply flawed August 2020 presidential election. Following his release, he was dismissed from his post.

This Olympic scandal will have been particularly painful for Alyaksandr Lukashenka. Ever since the beginning of his reign in 1994, the Belarus dictator has always taken a keen interest in sport. Like many autocrats, he regards sporting success as a source of prestige and legitimacy for his regime. A keen ice hockey player, Lukashenka likes to associate himself with sports stars. He personally led the country’s National Olympic Committee until February 2021, when he was forced to step down to avoid sanctions over the politically-motivated persecution of Belarusian athletes.

Sport in Belarus continues to be governed in line with traditions inherited from the Soviet Union, with athletes typically employed by state agencies. For example, Tsimanouskaya was officially employed by the Interior Ministry. This system helps keep Belarusian sportsmen and women highly dependent on government support, thereby theoretically securing their loyalty to the regime.

Despite these precautions, many athletes joined the nationwide anti-regime protest movement that sprang up in summer 2020. More than 2,000 Belarusian sports stars signed an open letter calling for new elections and an end to violence against peaceful protesters. Others took part in demonstrations and were among the tens of thousands to be arrested. Over the past year, around 100 athletes have been detained, while seven have been charged with political offences and dozens more have been excluded from representing Belarus at the international level.

The persecution of sports stars has involved a number of high-profile cases. Two of Belarus’s most celebrated female basketball players, Alena Leuchanka and Katsiaryna Snytsina, left the country over their criticism of the regime. Alena had earlier spent two weeks in prison in Minsk. Another critic of the Lukashenka regime, world champion freestyle skier Alyaksandra Ramanouskaya, was removed from the national team.

Following criticism of the crackdown, retired three-time Olympic swimming medallist Alyaksandra Herasimienia was prevented from training children and is now facing criminal charges for “damaging national security.” The Belarus Chess Federation forbade Grandmaster Uladzislau Kavalyou, the highest-ranking chess player in Belarus, from representing his country in the world championship that has recently concluded in Sochi. Kavalyou had earlier refused to play in a national chess tournament in protest against political repression in Belarus.

Lukashenka clearly hopes that a combination of terror tactics and dependence on the state will prevent other Belarusian sports stars from speaking out. However, the recent example of Tsimanouskaya suggests otherwise and is a reminder that such tactics can backfire embarrassingly.

In the days following Tsimanouskaya’s defection, Belarusian athlete Yana Maksimava and her husband Andrei Krauchanka announced that they would also not be returning to Belarus following their vacation in Germany. “To our great regret, in Belarus today you can lose not only your freedom but also lose your life,” Maksimava wrote in an Instagram post. “Here, we have the opportunity to breathe and take part in the fight for the freedom of our people, relatives, and friends. And we will definitely win.”

For more than a quarter of a century, Lukashenka has exploited Belarusian sporting success to strengthen his grip on power, but the country’s athletes are now becoming increasingly associated with the pro-democracy opposition that threatens to bring down his regime. This should come as no surprise. Born after the collapse of the USSR, these young sports stars are part of a new generation of Belarusians that is untouched by post-Soviet trauma and hungry for the personal freedoms enjoyed elsewhere in Europe. “I want people in my country to stop being afraid,” said Tsimanouskaya following her arrival in Poland. “I want them to respect each other and to respect themselves.”

Katia Glod is a Nonresident Fellow with CEPA’s Russia program. She is also an independent analyst and political risk consultant advising on political and economic issues in the post-Soviet region.