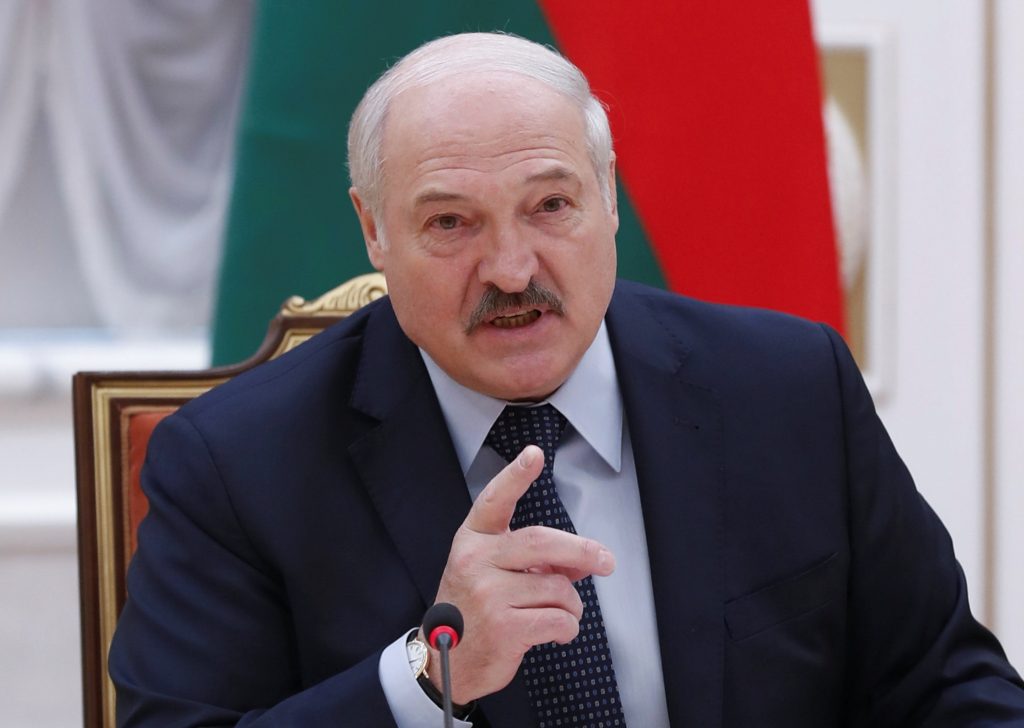 One effect of the series of hostage videos, choreographed confessions, and staged public appearances featuring the kidnapped dissident journalist Raman Pratasevich is to illustrate how Alyaksandr Lukashenka’s Belarus is quickly turning into the “North Korea of Europe.” But another is that they are exposing a potential rift between Lukashenka and his patrons in the Kremlin.

In his June 3 “interview” with the ONT Belarusian state television station, Pratasevich, who was arrested on May 23 after the Vilnius-bound Ryanair flight he was aboard was effectively hijacked and forced to land in Minsk, claimed that the opposition NEXTA Telegram channel he ran was financed by a Russian oligarch from the Urals region.

This was an apparent reference to the Belarusian-born Russian tycoon Dmitry Mazepin, owner of the Russian chemical producer Uralkhem and deputy chairman of the board at Russian potash giant Uralkali.

Mazepin promptly denied the allegation in a video interview with Russia’s RBC news agency. One day after Pratasevich’s interview, the tycoon unexpectedly pulled out of a scheduled appearance at the St. Petersburg Economic Forum.

Then, on June 7, Kremlin spokesman Dmitry Peskov weighed in, warning Belarus against “playing cat and mouse” before adding, “Since such allegations and accusations have been made, there needs to be a clarification.”

So what exactly is going on here?

Given the coerced and choreographed nature of Pratasevich’s appearances, we can safely assume that everything he says in public has been scripted by the Belarusian authorities. The Lukashenka regime is therefore effectively accusing a Kremlin-connected oligarch of bankrolling the Belarusian opposition. And Peskov’s sharp and curt response suggests Moscow is not happy about it.

At first glance, this does not really compute. Why would Lukashenka attack his Russian patrons at a time when he has become so toxic in the West that there is absolutely no chance of him returning to his old game of playing both sides against each other? Why do this when he has no place else to turn?

One plausible explanation is that Lukashenka feels threatened by Russia, which has been taking advantage of the Belarus dictator’s weakened position to steadily increase its economic, political, and military footprint in his country. Mazepin, who has been seeking to acquire key Belarusian companies, has been a key player in Mosow’s expanding economic influence.

Kremlin leader Vladimir Putin is also pressing Lukashenka to amend the Belarusian Constitution to increase the authority of the country’s parliament at the expense of the presidency. Russia has been actively putting the pieces in place to make sure Moscow controls a potentially enhanced post-Lukashenka legislature through pro-Kremlin parties.

As I have written in this space, Russia’s apparent encouragement of, and possible involvement in, the Belarusian operation to force Ryanair Flight 4978 to land in Minsk had all the hallmarks of a classic reflexive control operation aimed at making Lukashenka as toxic as possible.

When the ensuing international crisis turned Lukashenka into even more of an international pariah, it provided an opportunity for Putin to grant a “concession” to the West by offering to ease Lukashenka out of power via the constitutional reforms which the Kremlin has already been pushing in Belarus for some time.

A confidential unpublished report by the Minsk-based Center for Strategic and Foreign Policy Studies stated that the recent allegations against Mazepin appear to be an effort by Lukashenka to “blackmail the Kremlin.”

In an interview with Belorusskiy Partizan, Arsen Sivitski, the director of the Center for Strategic and Foreign Policy Studies, said the Kremlin is seeking to float a deal with the West on Lukashenka similar to the one that Russia, the United States, and the European Union are believed to have cut regarding Moldova back in the spring and summer of 2019.

At that time, the toxic figure who had become inconvenient for both Russia and the West was Moldovan oligarch Vladimir Plahotniuc. A longtime gray cardinal, power broker, and shadow ruler in Moldovan politics, Plahotniuc professed to be pro-Western. But he was always prepared to work with Moscow, had a lot of business ties to Russia, and was widely suspected of being a not-so-stealthy Kremlin asset.

In June 2019, when Plahotniuc had become unacceptable for all parties, Russia, the United States, and the European Union appeared to reach an agreement to collectively withdraw their tolerance of Plahotniuc and facilitate his removal from power.

Russian media launched a campaign against the oligarch accusing him of corruption. Criminal cases were launched against him for money laundering, and press reports linked him to the attempted murder of Russian banker German Gorbuntsov in London in 2012. He eventually fled the country and has not been a factor in Moldovan politics since.

There have been tentative signals that the Kremlin may be floating a similar arrangement in relation to Lukashenka. On the eve of the Biden-Putin summit, for example, Russian media reported that Russia had removed Belarusian opposition leader Svyatlana Tsikhanouskaya from its wanted list.

Repeating that success in Belarus, where Russia has significantly more assets and will certainly be more ruthless in its efforts to keep Belarus in its orbit, would be a heavy lift. But Belarusian society is becoming increasingly pro-Western and more resistant to Russian dominance.

It is far from certain that the Moldovan scenario is genuinely being considered for Belarus, but speculation on the subject reflects the growing signs of a rift between Belarus dictator Lukashenka and his Kremlin patrons. As tensions mount, we may soon see some significant movement in Belarus.

Belarus ruler Alyaksandr Lukashenka’s recent claim that he was the target of a US-backed coup may be more than just the latest in a series of conspiratorial rants by the increasingly beleaguered dictator.