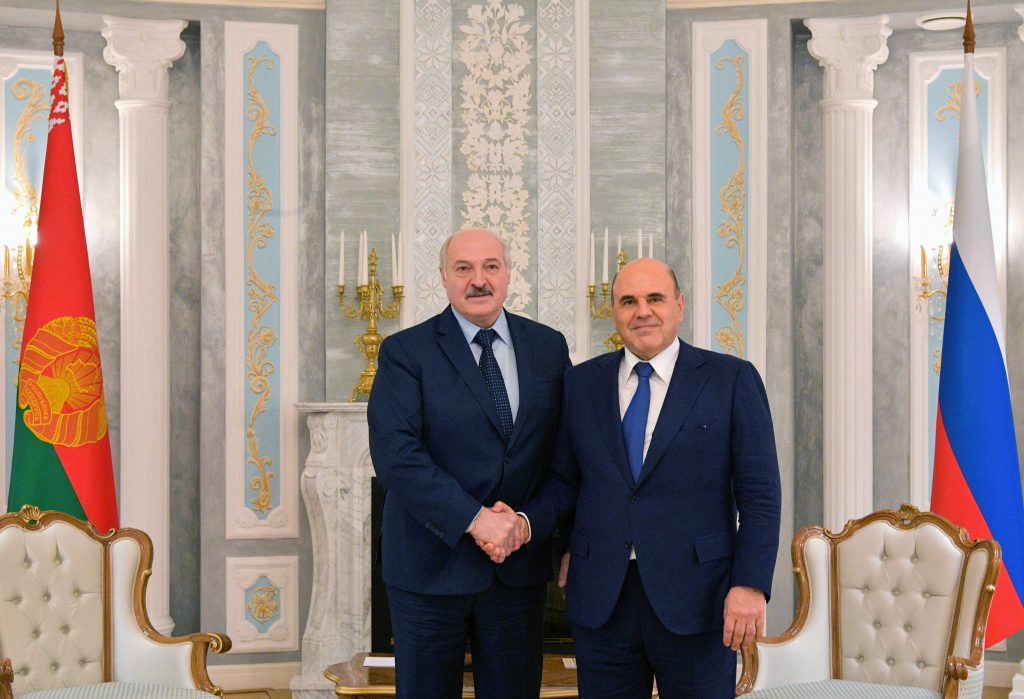 One way to look at Belarus ruler Alyaksandr Lukashenka’s claim last week that he was the target of a US-backed coup and assassination attempt is that this is just the latest in a series of conspiratorial rants by an increasingly beleaguered dictator.

But as is often the case in the former Soviet Union, upon closer examination, there appears to be at least some method behind all the madness.

Lukashenka’s claim that the plot was approved “by the top political leadership” in the United States came just days after Russia’s Federal Security Service had arrested two Belarusians, including one with US citizenship, and accused them of plotting to carry out a coup during the May 9 Victory Day parade in Minsk.

Yuras Zyankovich, a Belarusian-born lawyer who also holds US citizenship, and Alyaksandr Fyaduta, who served as Lukashenka’s spokesman in the 1990s, were extradited to Belarus.

The Belarusian KGB said the alleged plot was connected to an online discussion on Zoom last summer among experts, opposition figures, and former law enforcement officials who were discussing the country’s political situation and possible future scenarios.

The immediate context surrounding the arrests and coup plot allegations suggests that these developments are part of a broader operation designed to advance Russia’s strategic goals both in Belarus and vis-a-vis the West.

News of the “coup plot” came as Lukashenka prepares to visit Moscow for talks with Kremlin leader Vladimir Putin on April 22. On the eve of Lukashenka’s visit, Putin raised the alleged plot in his bellicose state-of-the-nation speech on April 21, claiming that what he called “unjust sanctions” against Belarus are escalating into “something more dangerous: a coup attempt in Belarus.”

As speculation mounted over the coming meeting in Moscow, Lukashenka released an oblique statement on the state-run Telegram channel Pul Pervovo on April 17 announcing that he has made “the most principled decision of my quarter-of-a-century presidency,” adding that “it will be serious” and he will “formalize” the decision soon. This has led to speculation that some form of deeper integration between Russia and Belarus could be imminent.

The broader context surrounding the recent arrests and coup allegations is also important. The “exposure” of the alleged plot comes at a time when Russia is visibly expanding its political, economic, and military footprint in Belarus with the clear aim of achieving Moscow’s long-standing objective of turning its smaller but strategically vital Western neighbor into a pliant and obedient vassal. It also comes when Belarusian society is increasingly distancing itself from Russia and embracing the West amid an unprecedented wave of pro-democracy protests.

At the most basic level, claims of a US-backed coup advance Moscow’s goal of increasing Belarusian isolation from the West and increasing its dependence on Russia. It also appears to be an attempt to foreclose any attempt by Lukashenka to return to his pre-August 2020 game of tacking between Moscow and the West in order to achieve the maximum degree of geopolitical flexibility.

The main objective here may have been to send a clear and unambiguous message to the Belarusian strongman: you are in Russia’s sphere of influence now and you have no place else to turn. Judging from his subsequent comments, Lukashenka appears to have received the message loud and clear.

In his public statements, Lukashenka has not only accepted Russia’s narrative about the arrests and the plot, but has also built on them enthusiastically. According to his evidence-free account, not only was there a US-backed plot to overthrow the Belarusian government, but also a conspiracy to assassinate him and his children.

Lukashenka has claimed that Putin raised the issue of the alleged US-backed plot in a recent phone call with US President Joe Biden. “I am grateful to Putin. When he was talking with Biden, he asked him this question,” Lukashenka reportedly commented. Kremlin spokesman Dmitry Peskov later confirmed Lukashenka’s account.

In addition to advancing Moscow’s geopolitical goals in Belarus, this “coup plot” also feeds into Moscow’s perennial goal of establishing a “whataboutism” narrative with the West at a time when Russia is under increasing scrutiny for massing troops on the Ukrainian border. It also follows news of new US sanctions over the SolarWinds hack against US federal agencies and interference in the 2020 US election. And it comes in the midst of an escalating diplomatic crisis with the Czech Republic, which expelled Russian diplomats last week over claims that Russian military agents were behind a deadly 2014 explosion at a Czech arms depot.

Despite US denials and a lack of any real evidence to support it, the alleged coup plot gives Moscow the ability to advance a narrative that it is not guilty of anything more nefarious than the West’s own actions. Indeed, Russian Foreign Ministry Spokeswoman Maria Zakharova claimed that the recent Czech decision to expel Russian diplomats was an effort by the West to distract attention from the alleged coup plot.

The Belarusian “coup plot” comes right out of the Kremlin playbook of using dramaturgy, subterfuge, and disinformation to muddy the waters, establish false equivalency narratives, and create facts on the ground to advance Moscow’s imperial and revanchist geopolitical goals. It is important for Western policymakers to remain clear-eyed amidst all this Kremlin-generated fog.

The essence of the conflict between Russia and the West is a normative struggle between a Western system based on the rule of law and accountability against an alternative advanced by the Putin regime that is based on kleptocracy and autocracy. It is a battle being played out in Russia’s neighboring countries, including Belarus, and inside Russia itself.

The West is on the right side of history in this struggle and must not allow itself to be distracted from this essential truth by the Kremlin’s dramaturgy and subterfuge.