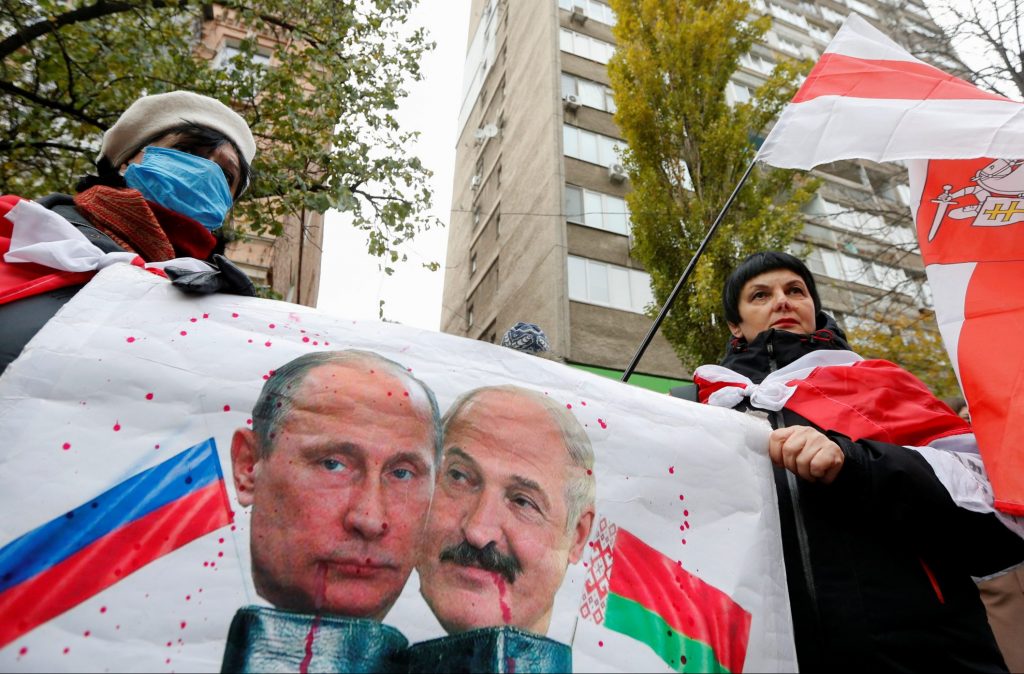 As Alyaksandr Lukashenka was heaping praise on Kremlin leader Vladimir Putin and baselessly warning that the United States and the European Union were seeking to stage coups in both Russia and Belarus, opposition leader Svyatlana Tsikhanouskaya was looking West.

In a tweet on January 30, Tsikhanouskaya thanked Lithuanian President Gitanas Nauseda for nominating her for the Nobel Peace Prize, calling it a “great expression of solidarity with Belarus” and an “acknowledgment of our peaceful fight for freedom.”

The juxtaposition of Lukashenka’s tight embrace of Putin with Tsikhanouskaya’s public gratitude toward Nauseda both symbolizes and reflects an ongoing struggle for Belarusian political identity amid continuing anti-government protests and a brutal crackdown against dissent.

Like Tsikhanouskaya, who is living in exile in Vilnius, increasing numbers of Belarusians are starting to turn their gaze westward.

In a poll conducted in November 2020 by the Belarusian Analytical Workshop, 40 percent of respondents said Belarus would be better off in a union with Russia while 33 percent favored integration with the European Union. These figures marked a sharp drop in pro-Moscow sentiments and a rise in pro-European attitudes since the same poll was conducted just two months earlier. In September 2020, a 52 percent majority had favored integration with Russia, while only 27 percent supported closer ties with Europe.

In a commentary for the Moscow Carnegie Center, Artyom Shraibman notes that Putin’s support for Lukashenka “has already cost it the sympathy of part of the population” because “pro-Russian feeling is increasingly associated with support for the regime.”

This was also borne out in a November 2020 online poll conducted by Chatham House. According to that poll, 34.6 percent of Belarusians said their attitudes toward Putin had gotten worse because of Russia’s actions in Belarus since protests broke out in August, while just 7.5 percent said their opinion of Putin had improved. Likewise, 33.9 percent said relations between Russia and the Belarusian people will get worse due to Russia’s actions while 18.3 percent said they would improve.

Similarly, a poll conducted by the Warsaw-based Center for Eastern Studies (OSW) in late November and early December 2020 showed that 43 percent of respondents consider Russia to be the greatest threat to Belarusian sovereignty and territorial integrity, the highest figure among all the countries featured in the survey.

To be sure, large numbers of Belarusians continue to have warm feelings toward Russia and the Russian people. But many are increasingly realizing that it will be difficult for Belarus to be free, independent, and democratic while maintaining close ties to Moscow.

According to the Chatham House poll, for example, 33.3 percent say integration with Russia would make Belarus more corrupt, 39.4 percent say it would mean the end of Belarusian statehood, and 45 percent say Belarusians can only improve their identities in a fully independent country.

The shifting attitudes about Belarus’s geopolitical orientation are taking place amid a re-evaluation of the country’s history, identity, and what constitutes a usable past. A growing portion of the public is looking to the country’s European history prior to its incorporation into the Russian Empire in 1796. Most notably, they are turning to the centuries the Belarusian lands spent as part of the Grand Duchy of Lithuania and the Polish-Lithuanian Commonwealth.

According to the OSW poll, “many more Belarusians believe that their state should draw upon the traditions of the Grand Duchy of Lithuania or the Polish-Lithuanian Commonwealth (39.7% and 6.3% respectively) rather than the Soviet Union (28%). Attention should also be paid to the relatively good result for the Belarusian People’s Republic (16.2%), the short-lived entity which resulted from an unsuccessful attempt to build an independent and anti-communist Belarusian state in 1918.”

What this suggests is that 62.2 percent of Belarusians believe their country should draw inspiration from periods when they were not ruled by Russia.

The changing attitudes of Belarusians towards their history and identity are also reflected in their relationship with national symbols.

Ryhor Astapenia, Robert Bosch Stiftung Academy Fellow at Chatham House’s Russia and Eurasia Program, noted the rising popularity of the White-Red-White flag and the Pahonia, the historical coat of arms of the Grand Duchy of Lithuania. Both were used by the 1918 Belarusian People’s Republic and by the post-Soviet Republic of Belarus from 1991-95.

In 1995, Lukashenka held a referendum, supported by 75 percent of the public, to make a modified version of Belarus’s green and red Soviet-era flag the country’s official banner. Today just 41 percent say they support the official flag.

“Although many of these changes are still in their early stages and it remains unclear exactly how far-reaching they will be in the long-term, we can say with confidence that Belarus society has already changed irrevocably since the summer of 2020, and that Belarusians are reinventing their nation,” Astapenia wrote.

Image: Russian President Vladimir Putin's decision to prop up the Lukashenka dictatorship in Belarus has forced many Belarusians to rethink their previously positive attitudes towards Russia and is now fueling growing levels of support for European integration. (REUTERS/Valentyn Ogirenko)