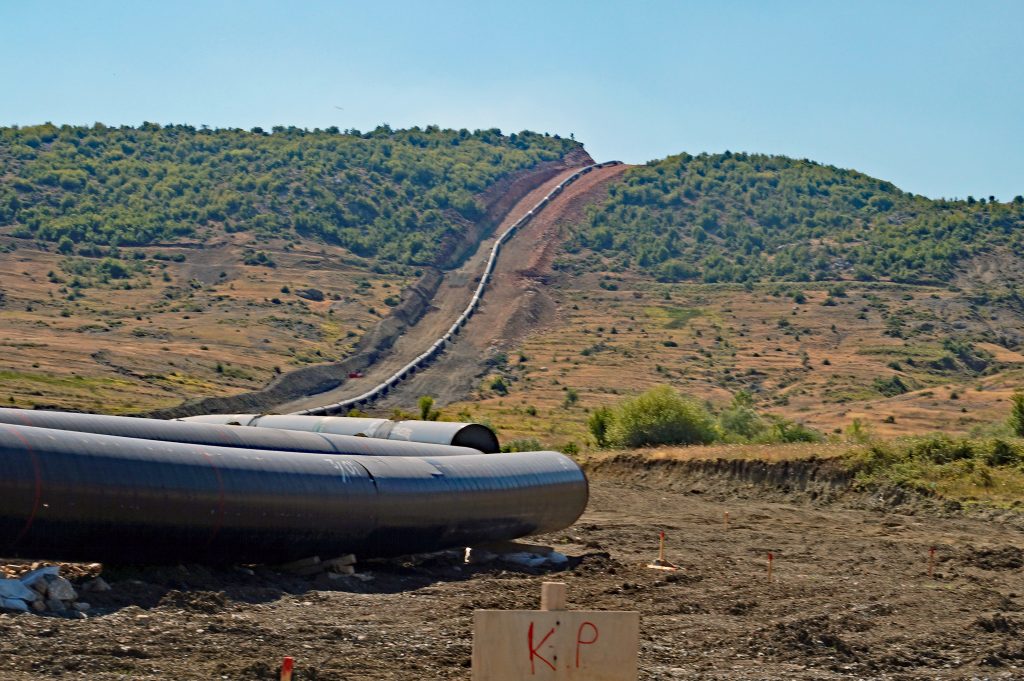 The United States, for over a decade, has supported the Southern Gas Corridor (SGC) as a means to enhance European energy security by providing Europe a new source of natural gas through a new (non-Russian) route. Now, however, at least some of the energy security value of the SGC could be in question. While important details remain inaccessible to the public, if Gazprom, a Russian company, is able to book capacity in the expansion of the final leg of the SGC, known as the Trans Adriatic Pipeline (TAP), Gazprom would be able to use a project of strategic importance to European energy security to enhance its own position within European energy markets.

These projects, the BRUA pipeline, the Trans Adriatic pipeline, the Ionian Adriatic Pipeline, the Krk Island FSRU project, and gasification efforts in Southeast Europe, and broader support and financing for such projects is crucial, but there are also challenges in terms of which projects receive priority and how they might complement or compete with one another.

Gas from the second stage of Azerbaijan’s Shah Deniz gas field in the Caspian (SD2) is already supplying gas to Georgia and Turkey through an expanded South Caucasus Pipeline (SCPX) and the Trans-Anatolian Pipeline (TANAP). TAP will connect to TANAP at the Turkey-Greece border, traversing Greece and Albania before crossing the Adriatic to Italy. The SGC will initially supply a total of 16 billion cubic meters of gas per year (bcma), with 6 bcma remaining in Turkey and 10 bcma continuing on to Europe through TAP.

TAP has suffered several delays, and current plans are for it to be completed late in 2020. From its inception, TAP, like the whole SGC, was planned to be expandable. Under the European Union’s (EU) 2009 gas directive, TAP was granted a third-party access exemption for its initial capacity of 10 bcma (half of its ultimate planned capacity of 20 bcma), allowing the Shah Deniz gas suppliers to fully book that capacity without open competition. As part of this third-party exemption, TAP was required to hold a Market Test for expansion before commercial operation of the initial phase of the project (and every two years thereafter) to determine whether there is demand for capacity beyond the initial 10 bcma.

An update on where things stand in completing a crucial component of the Southern Gas Corridor, the Trans Adriatic Pipeline (TAP). The pipeline—which will bring Shah Deniz gas from Azerbaijan to Greece, Albania, Italy and other Western European markets—is officially scheduled to open in 2020.

In line with the EU’s requirement, TAP initiated the first, non-binding phase of a Market Test on July 1, 2019. The Market Test is being conducted in line with the 2017 EU Capacity Allocation Regulation, under which any potential shipper is eligible to express interest and ultimately book long-term capacity—up to 90 percent of available capacity—in the expansion. It is being coordinated with two of TAP’s adjacent gas Transmission System Operators, Snam Rete (Italy) and DESFA (Greece). Coordination with the former is essential for any shipper planning to use TAP to deliver gas to Italy or beyond, since capacity entering the Snam Rete system from TAP would need to be available.

TAP announced the results of the initial phase of the Market Test on October 28, 2019. Expressions of interest for entry capacity into TAP totaled well over 11 bcma, while exit capacity from TAP into the Snam Rete system was approximately 8 bcma. Based on these results, TAP has begun a Coordinated Design Phase to study options for expansion of up to 10 bcma, bringing total TAP capacity to 20 bcma, the maximum capacity initially planned for the pipeline. The studies are to be completed by January 13, 2020, followed by a one-month Public Consultation on draft project proposals that arise from the Coordinated Design Phase. TAP will assess a modest fee on companies that submitted expressions of interest in the initial phase of the Market Test. Given that expressions of interest went beyond the 20 bcma maximum planned capacity of TAP, TAP is willing to further examine an expansion that would take its maximum capacity to about 24 bcma (which would involve looping the pipeline) if one or more potential shipper is willing to reimburse TAP for the cost of such a study (about 1.4 million Euros). This would not require a new Market Test.

Based on the Public Consultation results, TAP will refine its potential expansion plans and, if appropriate, begin the binding phase of the Market Test. If sufficient binding commitments are forthcoming, a decision by TAP to move forward will be made. Actual construction time for any of the expansion options is estimated at two to three years.

For some time, industry observers have expressed concern that Gazprom could book capacity in the TAP expansion, essentially using the EU’s regulations to achieve its own economic (and Russian geopolitical) goals while undermining the basic rationale for the SGC—bringing a new source of gas to Europe. This was particularly a concern in relation to the second line of the TurkStream project (TS2), which will deliver gas across the Black Sea to Turkey and on to Europe. Proponents of European energy security feared was that Gazprom might use the TAP expansion as a vehicle to deliver TS2 gas to Italy and beyond. More recent evidence that TS2 will instead follow path through Bulgaria, Serbia, and Hungary to Austria has lessened that concern (although concern about the impact of TS2 on Southeast Europe’s energy security remains).

In announcing the results of the first phase of its Market Test, TAP did not reveal the names of the companies that expressed interest, as such information is typically not made public. Therefore, there is no way of knowing whether Gazprom or any of its affiliates or customers was among those expressing interest. Other shippers may very well account for the bulk of the interest in expansion. But it is plausible that Gazprom may have expressed interest in order to hedge its bets, given uncertainties about the future of Nord Steam 2 (NS2), including the potential impact of the recent European Court of Justice (ECJ) decision limiting its access to the Opal pipeline. That decision, if applied to the Eugal pipeline, the onshore continuation of NS2, could limit Gazprom’s ability to fully use NS2’s capacity. Consequently, Gazprom may be again considering additional lines of the TurkStream project, which was initially planned as a four-line system transporting as much as 63 bcma, mimicking the South Stream project that was cancelled in 2014. If NS2 is not able to operate at full capacity, Gazprom could view additional lines of TurkStream as a means to contribute to its goal of limiting or eliminating Ukraine transit. An expanded TAP would be one way to deliver gas from additional lines of TurkStream to Europe. In that event, an outcome of the TAP Market Test that resulted in Gazprom booking significant capacity in an expanded TAP, an important part of the SGC, would be a major blow to EU’s energy security policy.

Daniel D. Stein is an independent energy analyst who previously served as senior advisor in the State Department’s Bureau of Energy Resources.