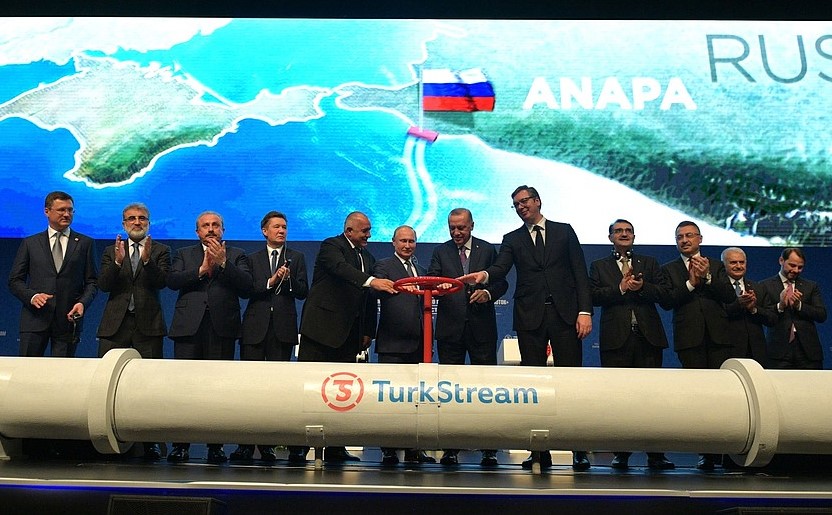 Flying largely under the radar, progress on the TurkStream pipeline has been met with little attention. This is quite unjust, as the project is a key piece of Gazprom’s future supply strategy. Not only is the pipeline a necessary contribution to Turkey’s gas supply portfolio but its second string also has effectively the same purpose as its once fiercely debated predecessor, South Stream. TurkStream consists of two lines, each capable of delivering 15.75 billion cubic meters (bcm) of natural gas annually. The first line is intended for the Turkish market, while the second is meant for Europe, comparable to South Stream before the project was scrapped in 2014. Therefore, TurkStream may affect the supply situation in both Southeast and Central Europe, adding another non-Ukrainian supply route from Russia. And as with South Stream, the pipeline is about to pose a legal challenge to the European Union, (EU), its Internal Energy Market (IEM) rules, and the EU’s energy policy more broadly.

Although the original South Stream project was plagued with political meddling, issues related to routing, and legal constraints, bringing additional gas volumes to Europe via the southern route (while circumventing Ukraine) is a goal too important for Russia to abandon completely. Thus, it was no surprise when a successor project—TurkStream, which follows two-thirds of the original South Stream route—was announced upon South Stream’s cancellation in late 2014. The major difference between these two projects is that TurkStream was never planned as a comprehensive project going all the way to targeted European markets. Instead, Gazprom implemented a new policy of incremental steps, building a pipeline to the important Turkish market first and effectively buying time to deal with the legal status of additional infrastructure.

Although TurkStream has been getting relatively less attention and media coverage than Nord Stream 2 in past several years, it came as little surprise when political and legal issues eventually surfaced. Although these concerns may seem secondary to current controversy surrounding Nord Stream 2, issues related to TurkStream are indeed important. TurkStream may not be as big as Nord Stream 1 and 2, but it is an integral part of Gazprom’s broader strategy to cement its position as a major energy supplier in Europe and the EU without being dependent on the transit through Ukraine.

In Southeast Europe, a region which will not see its supply security affected by TurkStream, Bulgaria will again be a buffer country. Bulgaria, home of the project’s European landfall, was first confronted with related legal and political issues when South Stream reached Europe’s shores. In December 2019, Russian President Vladimir Putin accused Bulgaria of hindering TurkStream construction, increasing political pressure on the country and bringing back Bulgarian memories of Putin personally scapegoating Bulgaria for South Stream’s failure in 2014. As a result, Bulgaria is again caught between the EU and Russia, trying to navigate the EU’s Internal Energy market rules while maximizing the potential benefits of being a transit country.

Bulgaria has been interested in becoming a gas hub for quite some time, and TurkStream is an essential part of their plan. Bulgarian Prime Minister Boyko Borisov reiterated bold plans for the country in 2019, but progress has been rather slow. Additionally, plans to turn Bulgaria into a gas hub were recently dealt a blow when the European Commission withdrew its support in the latest iteration of its Projects of Common Interest list. But whether or not Bulgaria’s plans of becoming a gas hub come to fruition, TurkStream is progressing and has already started delivering gas to Bulgaria, North Macedonia, and Greece, as of the start of 2020. With the original trans-Ukrainian transit route, the TransBalkan Pipeline, sitting idle and the potential of getting supplies from the south, rerouting Russian deliveries to Europe is clearly taking shape. And as with Nord Stream 2, the realization of the project is getting closer every day, making potential competitors, be it LNG terminals in Greece or eventually Croatia, gas flowing through the Southern Gas Corridor, or the East Med Pipeline, uneasy at the prospect of more Russian gas in the region.

In a case of history repeating itself, the Energy Community issued its opinion in February 2019 that the pipeline section from TurkStream through Serbia cannot be exempted from IEM rules, most notably the third-party access and unbundling principles. These are similar to objections the European Commission raised against South Stream. Additionally, the EU has already made it clear that TurkStream will be carefully scrutinized to verify that it adheres to IEM rules. Since Serbia is not an EU member and has yet to fully implement IEM rules, the situation there is likely to be different than other states along TurkStream’s route that are EU members (i.e., Bulgaria and Hungary). Gazprom is likely to implement a case-based approach, navigating between IEM provisions. In any case, Gazprom’s current projects are testing the EU’s legal stronghold in two places at once—in the north with Nord Stream 2 and in the South with TurkStream.

The general takeaway here is that the EU should find the sweet spot that balances its import needs and foreign policy concerns, most notably in relation to Russia. The EU currently deploys ad hoc solutions to hastily put out fires, instead of assuming an overarching, transparent position based on wide consensus. Their current method leaves room for Gazprom to jump on every opportunity to penetrate the European market. By not assuming a clear and firm position, the EU is creating a void that Gazprom is ready to fill, only perpetuating the problem.

This recurring Russian pipeline story thus bears two important messages. First, Russia will not give up trying to penetrate the European market—a reality that EU countries should be prepared for. Foreign supplies always pose a challenge to a certain degree, be it of a commercial, competitive, legal, or political nature, and supplies from Russia are indeed no exception, given their potential geopolitical implications. These challenges will not go away with TurkStream. On the contrary, with decreasing indigenous production, the EU is likely to be more import-dependent in the future. Second, ad hoc solutions are unviable going forward. It is understandable that the EU does not have a common internal energy policy, given its variety of internal energy mixes; however, the EU sorely lacks unity in approaching its external partners and unity will only be an asset for challenges to come.

Martin Jirušek is an assistant professor in the Faculty of Social Studies, Masaryk University in the Czech Republic. You can follow him on Twitter @MartinJirusek