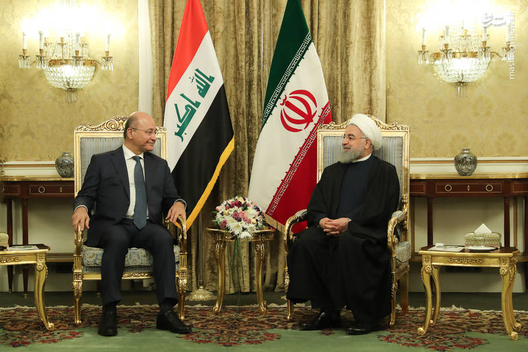 The new round of US sanctions against Iran has put neighboring Iraq in a tough position.

Baghdad heavily relies on Iranian electricity and natural gas imports to meet its energy needs. A forty-five-day sanctions waiver granted to Iraq by the Trump administration in early November is set to expire this week.

On November 11, US Energy Secretary Rick Perry attended a two-day conference in Iraq along with a trade delegation of over fifty US energy and security firms. During the visit, he urged Baghdad to wean itself off Tehran and pave the way for American investment in its energy sector. “The time has come for Iraq to break its dependence . . . on less reliable nations seeking domination and control,” Perry said.

Since the defeat of the Islamic State of Iraq and al-Sham (ISIS) in late 2017, Baghdad has also been under US pressure to rein in, if not dismantle, Iran-backed armed Shia groups known as Paramilitary Mobilization Forces (PMF). Last year, then Secretary of State Rex Tillerson said at a joint news conference with Saudi Foreign Minister Adel al-Jubeir that Tehran-backed militias and their Iranian advisors who helped expel ISIS from Iraq needed to “go home.”

In early November, the US embassy in Baghdad reiterated that stance in a tweet, calling on Iran to “respect the sovereignty of the Iraqi government and permit the disarming, demobilization, and reintegration” of the PMF. Perhaps most significantly, the US Congress has been considering various pieces of legislation to impose sanctions on Tehran-backed paramilitary forces in Iraq in an attempt to curtail their maneuvering power.

These pressures, coupled with the traumatic experience of ISIS, have led the Iraqi government to move towards creating a balance in its foreign policy between American and Iranian interests by trying to distance itself from Iran and getting closer to US-allied regional rivals such as Saudi Arabia and the United Arab Emirates.

In early August, former Iraqi Prime Minister Haider al-Abadi expressed disagreement with reinstated US sanctions against Iran “as a matter of principle,” but stressed that his government would abide by them to protect Iraq’s national interests. The remarks provoked the ire of Tehran and its allies in Iraq, forcing Abadi to qualify his position. “I did not say we [would] abide by the sanctions, I said we [would] abide by not using dollars in transactions. We have no other choice,” he said.

Munqith Dagher, the chief executive of Almustakilla, attributes this shift of attitude to Iran’s responsibility, as perceived by Iraqis, for causing “misery” on political, economic and social levels.

Despite helping Iraq defeat ISIS by mobilizing allied Shia militias, the Islamic Republic is facing increasing challenges to its position in its neighbor. On the one hand, Baghdad seeks to forge a more balanced and independent foreign policy that would reasonably accommodate the interests and ideologies of all regional powers. On the other hand, Iran seems to be increasingly viewed in Iraqi public opinion as an irresponsible and malign actor in Iraq’s national politics and economy.

Yet, the Islamic Republic is unlikely to scale down its presence in Iraq, particularly at a time when US sanctions against its oil industry and banking system are squeezing the Iranian economy hard and threatening its national security. On the contrary and as in the past, all evidence suggests that Iran will likely use Iraq as a buffer to navigate and push back against sanctions. Iran also regards PMF groups in Iraq as a key pillar of its “strategic depth” and a powerful asymmetric deterrent against possible military aggression by the United States and its regional allies.

During Iraqi President Barham Salih’s visit to Tehran two weeks after the resumption of US sanctions, President Hassan Rouhani raised the prospect of doubling annual trade with Iraq. “Today, the economic relations between the two countries reach about $12 billion [per year] and, through bilateral efforts, we can increase this figure to $20 billion,” Rouhani said.

During the same visit, Salih also met with the Supreme Leader Ayatollah Ali Khamenei who urged the Iraqi president to keep the PMF intact despite US pressure to disband them. Khamenei’s PMF reference was not a simple request. It basically meant that Tehran will not let Baghdad dismantle its Shiite proxies, and will keep funding and supporting them.

Given Iran’s capability to wreak havoc in Iraq and threaten its stability, the United States will have a hard time convincing Abdul Mahdi’s government to turn its back on the Islamic Republic.