Russia’s invasion of Ukraine on February 24 came at a time when Iran was engaged in tedious negotiations with the remaining parties to the Joint Comprehensive Plan of Action (JCPOA) plus the United States—albeit indirectly—to revive the nuclear agreement the Donald Trump administration withdrew from in 2018. With the future of talks in limbo, the Ukraine war has brought the debates over the future of Iran’s national security strategy to the fore once again.

Ever since the outbreak of the conflict, Iranian state media and political commentators inside the country have paid close attention to the war and its implications for Iran. Much of the debates largely fall on political and ideological fault lines within the country, with the discourse shifting in favor of a stronger deterrent force with supporters pointing out the failure of the Budapest Memorandum and security guarantees to prevent Russia’s invasion of Ukraine. As this piece will demonstrate, the supporters make the case that the solution to deter foreign adversaries lies in expanding Iran’s deterrent force.

Notwithstanding their marginalization in Iranian domestic politics, reformist newspapers and pundits emphasize the importance of “unity” and “dialogue” over military hardware. For example, Etemad Newspaper, which has remained supportive of the nuclear talks and the JCPOA, wrote in March that “Russia’s war against the people and government of Ukraine taught a big lesson to everyone; that those countries with larger arsenals and more powerful armies are not necessarily the winner of wars. Even if Kyiv falls, Russia has lost the public opinion war and the Ukrainian people’s conscience. This shows that [former President Ali Akbar Hashemi Rafsanjani’s] assertion that the superiority of nations is not determined only by missile capabilities…was accurate.”

In a like manner, Mohsen Tajzadeh, a reformist politician and acting interior minister under reformist former President Mohammad Khatami, told me that the Russian invasion of Ukraine fashioned the mindset among the hardliners that, if Ukraine had remained a nuclear state, Russia wouldn’t have invaded it. Tajzadeh argued, however, that mindset proved to be wrong for two reasons. First, while Russia has nuclear weapons, the United States and European Union imposed sanctions on it. Thus, having a nuclear arsenal and intercontinental ballistic missiles has no impact on lifting sanctions. Therefore, nuclear weapons wouldn’t elevate Iran’s position in negotiations. Additionally, the resistance of the Ukrainian people demonstrated that a united people have the final word.

“But the most important lesson is the internal dynamics of a country, which determines its foreign policy trajectory, and how it defines its relations vis a vis great powers…we need to remain a united nation despite all our differences and pursue an independent foreign policy without relying on any power bloc,” Tajzadeh stated in his interview with me.

On the other side of the political spectrum, hardliner media outlets and military officials see the conflict as reason to call for buttressing Iran’s deterrent force and increased military capabilities. They view the world through the lens of “God helps only those who help themselves,” and that only a strong Iran can force great powers like the United States into concessions.

It’s noteworthy that, in the absence of a modern air force capable of matching its neighbors’ ever-expanding air fleet, Iran has resorted to establishing a large ballistic missile arsenal and increased Unmanned Aerial Vehicles (UAV) capability. This was explained to me by Hossein Dalirian, an Iranian defense and intelligence analyst and the former editor of Tasnim News Defense Desk, who said that the conflict in Ukraine demonstrates that Iran’s strategy to invest in the mass production of UAVs was an important and strategic decision, which needs to be strengthened even further. However, parallel to these developments, Iran also needs to work on further developing its fighter aircraft to strengthen its air capabilities sooner.

Brigadier General Aziz Nasirzadeh, the Commander of the Iranian Air Force, the Deputy Chief of Staff for the Iranian Armed Forces, and pilot in the Iran-Iraq war (1980-1988), warned in March that “the conflict in Ukraine teaches us important lessons. They [Ukraine] dismantled their nuclear deterrent and faced this crisis. In our own country, there were people who argued that we dismantle our defensive capabilities and reach peace…In today’s world, one cannot ignore military power and a deterrent force.”

General Nasirzadeh wasn’t the only Iranian official who warned of the possibility of compromising on the country’s defensive capabilities. Abdolkarim Abedini, the Imam of Friday prayers from Qazvin, whom Supreme Leader Ayatollah Ali Khamenei directly appoints, also noted in his sermons in March 2022 that, “By disarming [Ukraine], Americans slowly pushed Ukraine to chaos and now they have left the country and [Ukrainian] nation in flames…Americans’ efforts to disarm the Iranian nation and [create] the same fate for them is useless. This nation will not give up its defense.”

Similarly, media outlets close to the hardliner faction, adopted a similar approach by arguing that the conflict in Ukraine means that, instead of engagement with the west, Iran needs to buttress its defenses. In this context, Danial Memar, the chief editor of Hamshahri Newspaper, wrote: “Why is that Ukraine is a defenseless country against Russia? Because, instead of planning to create a defensive shield for its own, it relied on westerners [help]…This is why the Ukrainian ambassador to Iran now says what happened to Ukraine today should be a lesson for Iran not to abandon its nuclear shield.”

More significantly, in a rebuttal of Rafsanjani’s aforementioned argument that “tomorrow is a world of dialogue and not missiles,” Memar asserts that the theory is fundamentally flawed. “Why can’t Ukraine get out of the conflict with dialogue? Today and tomorrow belong to missile capabilities, military prowess, and their ensuing security…tomorrow belongs to the most powerful states.”

Iranian political psyche, influenced by its national memory of the Iran-Iraq War and other foreign invasions, is generally suspicious of international law. Nonetheless, changes in the international environment, such as Russia’s invasion of Ukraine, the United States’ unilateral withdrawal from the JCPOA, and the subsequent hostile takeover of hardliners in Tehran, have demonstrated to the Islamic Republic that engagement with the west is futile. From this perspective, only a strong Iran can be proud and able to force great powers to recognize its rightful place at the table. 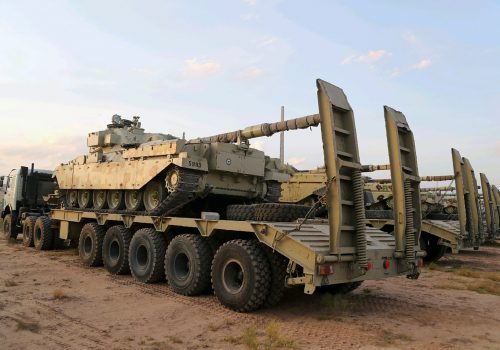 Is Iran going on an arms shopping spree in Moscow?

Iran has frequently turned to Russia for arms it could not produce at home.