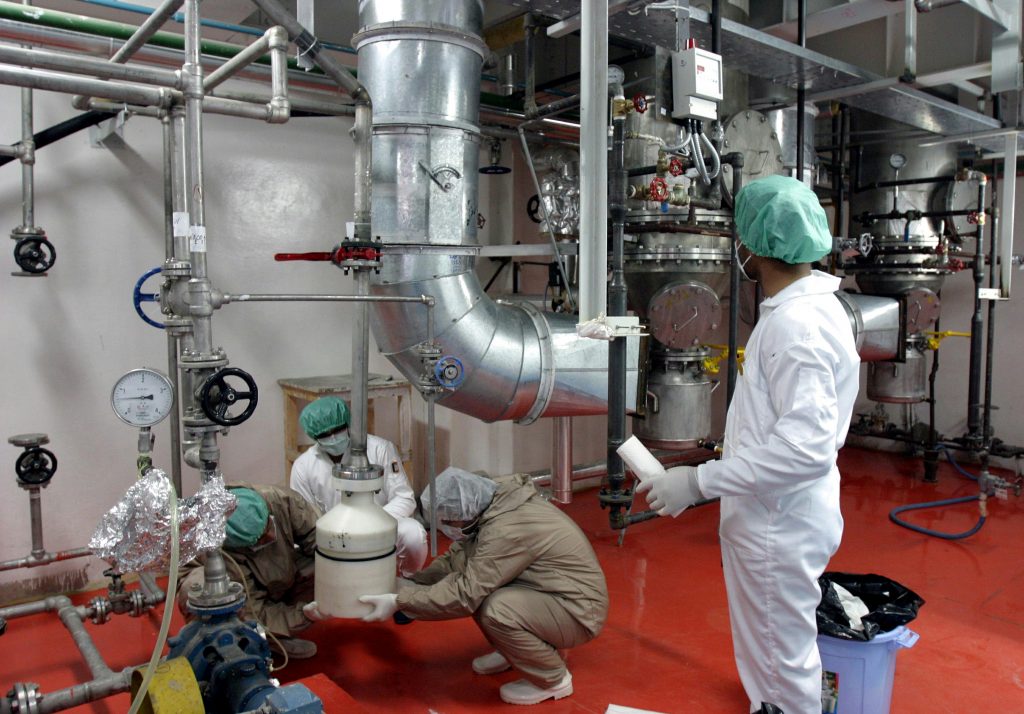 Iran’s most recent step to breach the nuclear restrictions in the 2015 multilateral deal known as the Joint Comprehensive Plan of Action (JCPOA) does not pose a near-term proliferation risk, but it is a significant escalation by Tehran that risks shutting the door on negotiations to restore compliance with the accord.

Iranian President Hassan Rouhani announced on November 5 that Iran would resume uranium enrichment at Fordow, an underground site previously used for that purpose but converted to a research and medical isotope production center under the JCPOA.

Specifically, the Atomic Energy Organization of Iran (AEOI) began feeding uranium gas into 696 IR-1 centrifuges on November 6 and plans to enrich uranium to about 4.5 percent uranium-235, slightly above the 3.67 percent limit set by the deal. The remaining 348 centrifuges at the site will continue being used for medical isotope production, the AEOI said.

This is the fourth breach Iran has committed in response to US President Donald Trump’s decision to violate the accord by reimposing sanctions on Iran and withdrawing from the deal in May 2018—despite Tehran not violating the JCPOA.

Similar to Iran’s earlier breaches, the decision appears to be calibrated to slowly erode Iran’s breakout, or the time it would take to enrich enough weapons-grade material for one bomb. It’s worth noting that when the JCPOA was fully implemented, Iran’s breakout was about 12 months.

Iran is currently enriching uranium to less than 5 percent uranium-235 using 5,060 IR-1 centrifuges and some of its advanced centrifuge machines at Natanz. According to a November 4 statement by the head of the AEOI, Ali Salehi, Iran has produced more than 500 kilograms of uranium enriched to that level—the JCPOA limited Iran to 300 kilograms—and the total production capacity is now about 5 kilograms per day.

Approximately 1,050 kilograms of uranium gas enriched to less than 5 percent is necessary to produce enough weapons grade uranium—more than 90 percent uranium-235—for one bomb.

Adding uranium to the stockpile produced by another 696 IR-1s will contribute to the slow decrease in breakout, but it is only a modest increase of about 15 percent in Tehran’s overall enrichment capacity using IR-1s. This step signals that Tehran is focused on increasing the pressure on remaining parties of the deal to deliver on Iran’s sanctions relief demands, not dashing toward a bomb.

This step signals that Tehran is focused on increasing the pressure on remaining parties of the deal to deliver on Iran’s sanctions relief demands, not dashing toward a bomb.

Furthermore, Iranian officials stressed that the International Atomic Energy Agency (IAEA), the body responsible for monitoring Iran’s nuclear activities, was informed in advance and would be present to monitor the actions. The IAEA’s continued presence at the site provides assurance that Tehran is not diverting nuclear material for a weapon and that any further deviations, or increases in enrichment level, will be quickly detected.

While the additional enrichment capacity does not pose a near-term risk, the decision to enrich uranium using the centrifuges at Fordow is a significant escalation and a more serious breach than if Iran had simply added the equivalent enrichment capacity at Natanz.

Iran began building Fordow, its second enrichment site, in secret, likely in 2006 or 2007. The location of the facility was revealed by the United States, France, and the United Kingdom in 2009. These states, along with the IAEA director general, argued that construction on the facility violated the subsidiary arrangements to Iran’s safeguards agreement with the agency, which required Iran to notify the IAEA when the decision to construct the facility was made. Iran argued that it had withdrawn from the subsidiary arrangement, known as Code 3.1, and therefore had not violated its obligations.

The location and small size of the facility—it is built to house about 3,000 centrifuges—suggests it was intended to produce material for weapons. A much larger facility would be necessary to produce enough material to fuel a power reactor, like the one Iran operates at Bushehr.

Prior to negotiations on the JCPOA, Iran had installed about 2,700 IR-1 centrifuges at Fordow and was enriching uranium to 20 percent uranium-235 using 696 IR-1 centrifuges—likely the same machines that are being used now for uranium enrichment.

Fordow poses more of a threat than Natanz because its built in the mountains and is estimated to be about 80 meters underground. This location would make it difficult for the United States to destroy using conventional military armaments. For other states, like Israel, it would be nearly impossible.

While any military strike against Iran’s nuclear program would only set the program back and risks driving Iran to openly pursue nuclear weapons, US presidents have emphasized that the military option remains on the table to prevent Iran from obtaining a nuclear weapon.

Given the uranium enrichment levels and the location of the Fordow facility, neutralizing its proliferation risk was a key concern for the P5+1—China, France, Germany, Russia, the United Kingdom and the United States—during negotiations on the JCPOA. Under the terms of the deal, Iran was allowed to retain 1,044 IR-1 centrifuges and converted the facility to a research and medical isotope production site. The JCPOA prohibited Iran from uranium enrichment activities or related research at Fordow for fifteen years.

Despite US President Trump’s decision to withdraw from the JCPOA in May 2018, his administration appeared to recognize the nonproliferation value of Fordow’s conversion to a research center. Washington has granted sanctions waivers—most recently on October 31—allowing cooperative work on Fordow’s conversion to continue. Although given Iran’s resumption of enrichment, that waiver may be revoked.

Enriching uranium at Fordow is a reversible step, as Iran’s President Rouhani emphasized, but it appears to be testing the resolve of European powers and may close the door on negotiations to restore full compliance with the accord.

Iranian officials continue to assert that they are open to diplomacy and ready to roll back their nuclear advances if they begin to see the economic compensation they were promised under the JCPOA. However, French President Emmanuel Macron, who has spearheaded recent efforts to reduce tensions between Tehran and Washington and salvage the deal, said on November 6 that Iran appears to have decided for the first time in an “explicit and blunt manner” to withdraw from the JCPOA. He described the action as a “profound shift.”

Iran has also threatened to take further action to violate the deal in sixty days if the remaining parties to the deal do not deliver on sanctions relief. Given the seriousness of Iran’s most recent action to breach the accord, any further steps to violate the agreement risk collapsing the accord and reigniting a nuclear crisis.

From overtures for US talks to threats of war with Iran

Rejected again and embarrassed by the escalation in the Persian Gulf his policies have incentivized, Trump is likely to make similar belligerent comments this year and US-Iran relations will only worsen.

The European Union on January 31 formally announced its long-awaited special purpose vehicle (SPV) for trade with Iran, called the Instrument in Support of Trade Exchanges (INSTEX).  Predictably, the SPV won’t seek to challenge US sanctions by attempting to conduct sanctionable trade with Iran as had been originally floated, and will instead focus on non-sanctionable trade, including […]