Many analysts have interpreted the results of recent Iraqi parliamentary elections on October 10 as a sign of diminishing Iranian influence, but the reality is more nuanced. To reach any conclusion, one needs to examine the power bases of Shia, Sunni, secular and ethnic groups, the orientations of Shia cleric and politician Muqtada al-Sadr, the role and influence of the clerical Hakim family, and the influence and instruments of Iran-backed Popular Mobilization Units (PMUs).

Clearly, parties critical of current Prime Minister Mustafa al-Kadhimi lost seats. Among them were the Fatah Coalition of Iran-backed PMUs and their political wings. Other losers were the party led by the moderate Shia cleric Ammar al-Hakim and the Nasr coalition led by the former Prime Minister Haidar al-Abadi, neither of which are considered pro-Iran. On the other hand, the Dawa Party of former Prime Minister Nouri al-Maliki, known to be close to Tehran, was the third biggest winner and took more seats than it had in the previous parliament.

The final election result announced on November 30 has been interpreted to suggest that the Sadr bloc has increased its popularity while Fatah’s support declined, but the vote total reveals a different story. While the Sadrists outperformed their PMU rival in seat count, the two sides received nearly the same number of votes. In fact, Fatah and its allies received slightly more votes than the Sadrists but secured fewer seats, with Fatah receiving an estimated 670,000 votes while the Sadrists received 650,000.

This suggests that ignorance of the new Iraqi electoral law and failure to use its mechanics properly —not popularity or proximity to Tehran—was behind Fatah’s fewer seats. According to an analysis published by Chatham House, Fatah failed to accurately assess the structure created by new legislation.

There are also questions about the results in Iraqi Kurdistan. Of the two main Kurdish parties, the Patriotic Union of Kurdistan (PUK) is closer to Iran than the Kurdistan Democratic Party (KDP). The PUK won sixteen seats but has rejected the preliminary results, claiming election rigging by KDP, which took thirty-three seats. The PUK’s allegations about election rigging are similar to those made by the Fatah coalition.

The preliminary results have created a dilemma for Iran, which has made no official comments about them. Tehran faces a paradoxical situation: if it doesn’t support the claims of the Fatah coalition about election rigging, this will increase the likelihood that the next Iraqi government moves to disarm the PMUs. If, on the other hand, Iran supports the rigging claims, it will be stuck in the middle of domestic wrangling among different political factions and later in the Iraqi parliament.

This is a simple cost-benefit calculation for Tehran, which won’t accept losing its influence in Iraq. The Islamic Republic’s rulers decided long ago that domestic influence in regional countries should be its top priority. So far, they have accepted all the costs for such influence.

On November 7, there was a failed assassination attempt against Prime Minister Kadhimi. No group has claimed responsibility but suspicion fell on Tehran until American military sources said that, although unspecified Shia militias are believed to have conducted the attack, “Iran seems to have lost its control and has not supported the drone attack.” Additionally, the Iraqi investigation committee announced on November 28 that the explosives and drones used in the assassination attempt were made in Iraq.

Iranian officials have so far argued that the PMUs have the most to lose from the drone attack. Former Iranian ambassador to Iraq Hassan Danaeifar said that the attack was “a sedition to block the trend of democracy in Iraq and to influence the formation of the next government in Baghdad.” He added that it was “simple-mindedness to blame this on an Iraqi group” and that the act “cannot be the result of domestic political competitions in Iraq.” The secretary of Iran’s Supreme National Security Council, Ali Shamkhani, ludicrously blamed “foreign think tanks” for the attempt.

Official Iranian newspapers, including government outlet Iran and hardliner mouthpiece Kayhan, attributed it to “the enemies of Iran and Iraq.” Javan, which is affiliated with the Islamic Revolutionary Guard Corps (IRGC) postulated that Kadhimi himself might have been behind the attack. The common theme among Iranian media of all stripes was that the attack was suspicious and perpetrated by Iraq’s enemies, who want Iraq to remain insecure about facilitating their manipulations—an analysis whose irony appears to have eluded the Iranian authors.

On November 8, Tehran sent IRGC Quds Force Commander Esmail Qaani to Baghdad, where he met with Kadhimi and other top officials. Qaani “insisted that Iraq needed stability and security at present,” that all acts that threaten Iraqi security must be avoided, and that “it is essential that the demands of Iraqis that have protested the election results are taken into account but only in the framework of the current laws.” Following his meetings, the PMUs and Iraqi government agreed to de-escalate tensions.

Muqtada al-Sadr is a critic of both Iran and groups backed by the United States and Saudi Arabia. This may mean that pressures may increase not only to neutralize the influence of Iran-backed PMUs and their political wing, but also to push for a full withdrawal of US forces from Iraq. Iraqi media have suggested that a significantly large number of the MP-elects also support these demands regardless of their political affiliation.

Many expected the election to end the political stalemate in Iraq, but Baghdad continues to face a multitude of crises. This atmosphere means that its politics remain open to outside influence and interference. The form of manipulations may change given the composition of the new parliament, but the content will remain as foreign countries exploit the different parliamentary trends, Iraq’s general shortcomings, and cracks in its system.

Tehran has realized that the PMUs are now marginalized in parliament and the future cabinet, but not at the social level. Therefore, Iran may push its agenda in Iraq less through the PMUs and more through existing diplomatic and economic leverage, such as the supply of energy, gas, foodstuffs, construction materials, tourism, and the religious and ethnic closeness of the two peoples.

This, of course, doesn’t mean that the PMU and Fatah coalition will be of no use to Tehran. However, Tehran will work with the groups that control the parliamentary majority. If the PMUs decide to focus more on political action and less on military activities, they may still have a chance of enlarging their electoral base for a return to power. In the meantime, Iran’s best options are to work with other groups such as Maliki’s faction, moderates such as Hakim, and allies like the PUK, in addition to the small Fatah faction in parliament.

The author, who is well versed in the Iranian political scene, asked to remain anonymous. 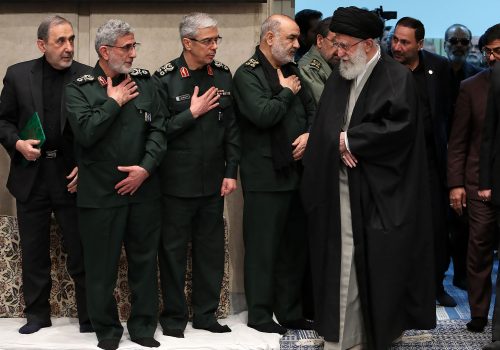 Analyzing terrorism sanctions on Iran and the path forward

The de-listing of Iranian economic entities that were designated as terrorist entities could spark a broader debate on the overarching US approach to Iranian support for regional armed factions.