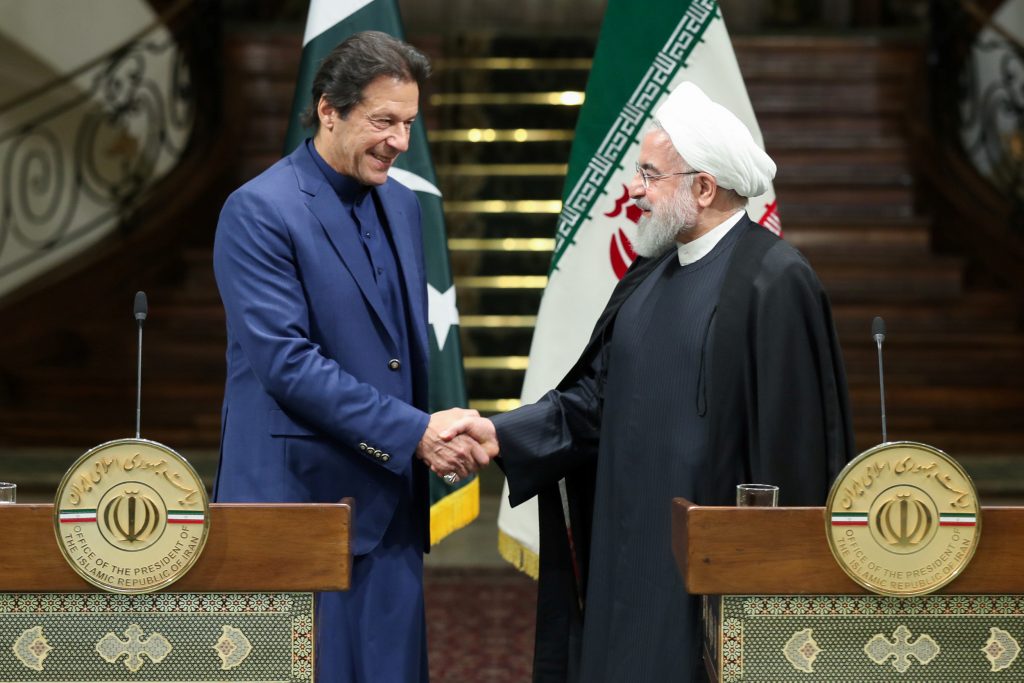 For decades South Asia shielded Tehran from crippling sanctions. It may be that South Asia will now save the region from a war between Iran and the Kingdom of Saudi Arabia.

If any of Iran’s neighbors is to bring Tehran and Riyadh together, it likely must be a non-Arab one: Turkey, India or Pakistan. But Turkey has too much on its plate right now in the wake of its new intervention in Syria. India, as a major buyer of Iranian oil and with its considerable investment in Iran’s Chabahar port, seems like it could fill that role. But India has chosen not to get involved in Iran’s regional troubles. It seems that Pakistan, a neighbor of Iran that is heavily reliant on Saudi Arabian loans, is volunteering to take on this very complex task.

Indian Prime Minister Narendra Modi tried, at the United Nations General Assembly in September, to present himself as peaceful and reasonable. He cited poetry, mentioned Mahatma Gandhi several times, and even attempted to portray himself as a scholar. This was the speech in which many expected him to include the word “Kashmir,” a Muslim majority region whose constitutional autonomy he’d revoked only weeks before. But Modi intentionally stayed away from the Kashmir issue, perhaps since it was clear that Pakistani Prime Minister Imran Khan would criticize him over it.

Khan, on the other hand, while bringing up legitimate points—such as when he questioned the effectiveness of India’s heavy militarization of Kashmir—mostly sounded frustrated and angry. He even resorted to war-like rhetoric. At one point in his speech, Khan said: “What is going to happen when the curfew [in Kashmir] is lifted will be a blood bath.” He also implied the possibility of a nuclear war between India and Pakistan. His speech, perhaps aimed at mobilizing a domestic audience, was very well received in Pakistan.

It is possible that Khan is expecting Tehran to be more critical of India regarding Kashmir in return for his efforts to de-escalate the increasingly dangerous confrontation between Iran and Saudi Arabia. However, Iran’s religious leaders have already issued their harshest statements to date on that issue. It is unlikely that they will go further and risk damaging relations with a key economic partner over Kashmir.

Perhaps it is a desire for greater cooperation on border security between Iran-Pakistan that motivates Khan. Despite many ups and down in Iran-Pakistan relations over cross-border terrorism, both countries have managed to keep relatively stable relations and have not used proxies against each other, a tactic both countries have employed in other situations. When it comes to border security, Pakistan’s attention is focused on its border with India not Iran, so this is probably not Khan’s motivation.

Are economic incentives pushing Khan to act as mediator? The so-called Peace Pipeline, a major Iran-Pakistan economic project that would have provided energy-hungry Pakistan with Iranian natural gas, has long been in limbo due to pressure from the United States and Saudi Arabia. With Iran’s economy squeezed by economic sanctions, Pakistan is not high on Iran’s list of economic priorities.

The issue of Yemen could be a factor behind Khan’s mediation initiative since Pakistan has indirectly been impacted by the Yemen war. Even though retired Pakistani General Raheel Sharif has been appointed commander of the Islamic Military Alliance to Fight Terrorism (IMAFT)—a partnership involving over forty countries that was created in 2015 and is headquartered in Saudi Arabia—Pakistan refused to send ground troops to participate in the kingdom’s ill-conceived Yemen intervention. Interestingly, Khan and his Pakistan Tehrik-e-Insaf (PTI) party opposed both Pakistani participation in the Yemen war and General Sharif’s appointment to lead IMAFT. So Khan’s motives must be beyond Yemen.

Bringing Iran and Saudi Arabia closer could boost Pakistan’s—and Khan’s—image as a player on the international stage. It is noteworthy that Khan talked of mediating between Iran and Saudi Arabia even before he established his cabinet last year. No regional player can afford the tension that will arise if the two countries spiral closer to war. All of South Asia would suffer heavily from such a conflict, since both Tehran and Riyadh have prominent footprints in the region. Pakistan could be especially impacted. While Pakistan was able to avoid participating in the Yemen war, it would be far more exposed in the event of a Saudi-Iran confrontation, due to its financial liabilities toward Saudi Arabia, its own sizable Shia minority—which rejects Iran’s theocratic system but opposes a military confrontation with Iran—and the important role of Pakistani workers’ remittances from Saudi Arabia and other Persian Gulf countries.

There are major internal obstacles in Iran to any improvement of Tehran-Riyadh relations. Hardline groups opposing any diplomatic efforts by President Hassan Rouhani’s government, have generally benefitted from the isolation of Iran. In fact, the existence of these groups depends heavily on Iran’s involvement in regional crises. That is why they are blamed for provocative actions such as attacking the Saudi embassy and a consulate in Iran in 2016 after the Saudi execution of a prominent Saudi Shia sheikh.

Still, the Iranian leadership has appeared to welcome Khan’s efforts in the wake of rising tensions over sanctions and attacks on tankers and Saudi oil infrastructure. In his October visit to Iran, Imran Khan met with the Supreme Leader. Ayatollah Ali Khamenei warned countries not to start a war with Tehran but sounded supportive of Khan’s efforts, stating that Iran has “no motivation for enmity” with other countries.

If Khan could successfully mediate this conflict, or even just help reduce Saudi-Iranian tensions, it would be a major accomplishment for Pakistani foreign policy that could boost Khan both domestically and abroad. From Khan’s perspective, the issue of Kashmir has not attracted enough international attention. Mediating de-escalation in the Persian Gulf could strengthen his ability to bring more attention to that crisis too.

In the past, Tehran has been careful to avoid antagonizing the government in New Delhi and has sought instead to bolster Iran-India ties and to balance Iran’s relations with India and Pakistan.

Is Saudi Arabia Pulling Pakistan Into War With Iran?

For years, the Pakistani government has avoided taking sides between rivals Iran and Saudi Arabia, but now it may be forced to choose. Pakistan is in dire need of financial support and the Saudis have the means to help. Will Pakistan accept the strings attached to Saudi generosity? Saudi Crown Prince Mohammed bin Salman (MBS) […]

A recent abduction of border security forces along the Iran-Pakistan border in southeastern Sistan and Baluchistan province is testing Iran-Pakistan relations. Iran has suggested that Saudi Arabia was behind the abduction, which it believes was aimed at sabotaging its relationship with Islamabad. Pakistan needs Saudi money more than ever as it struggles economically. So just how […]