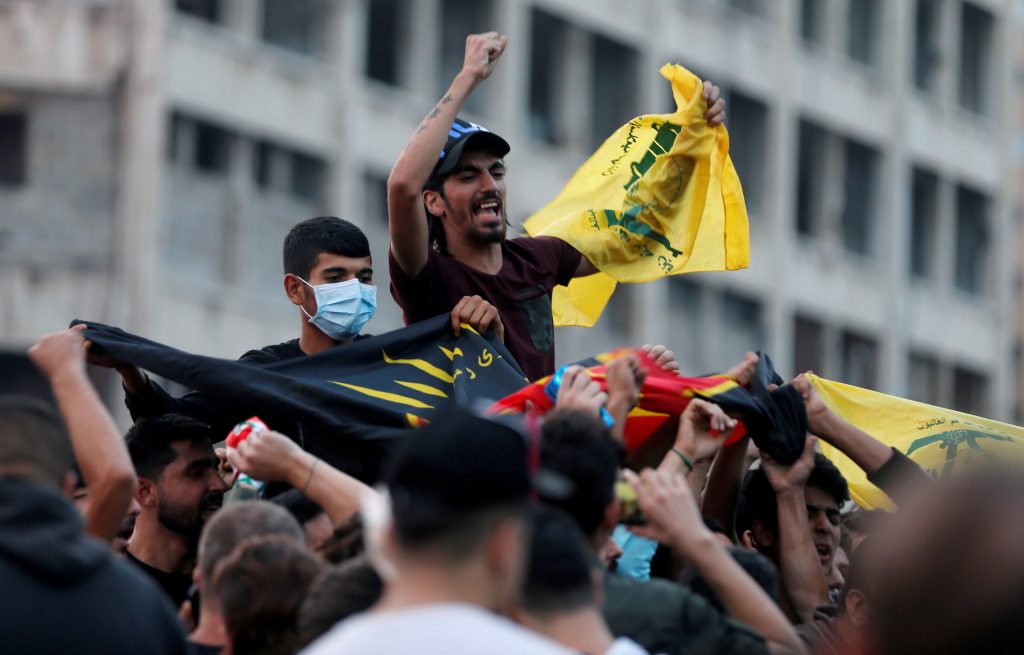 For two weeks, Lebanon has been witnessing countrywide protests demanding the downfall of the current government. Unprecedented for Lebanon, the protests—encompassing around 2 million people or approximately half the country’s citizens—are pan-sectarian and non-partisan, demanding economic reform and the dismantling of the sectarian system that has dominated the country since its inception. Despite the display of national unity, this uprising doesn’t portend the downfall of the dominant sectarian parties, least of all the militant group Hezbollah.

It’s worth noting that Lebanon’s current protests are not a second Cedar Revolution, which was an uprising against Syria’s thirty-five-year occupation of their country and Damascus’ local allies. They are economic, and not political. It is therefore inaccurate to portray them overall as a referendum on any particular party, including Hezbollah.

The proximate cause of the current upheaval was a later-rescinded proposal to tax Voice over IP (VoIP) services, like the messaging application WhatsApp. It was that final straw which drew Lebanese of all stripes into the street to protest decades of economic mismanagement, corruption, and the 2019 austerity budget. That budget placed the burden of the reforms demanded by the CEDRE conference—a French acronym for the Economic Conference for Development through Reforms and with Enterprise—on the country’s lowest socio-economic classes.

The protesters likely have little in common beyond feeling insulted by their leaders’ conduct, and their desire to see the entire current government resign. To the extent the more-organized of these protests possess or have expressed any unified positions none of their stipulations would fundamentally weaken or undermine Hezbollah, like calling for its disarmament. In fact, some of the protesters’ demands and grievances overlap with long-standing Hezbollah stances, including its opposition to Lebanon’s confessionalist system, and placing the onus of CEDRE reforms and taxes on the poor.

Moreover, most of these protests do not oppose Hezbollah per se, only insofar as it is part of the hated ruling political class or supports it. While a handful specifically targeted Hezbollah and the Amal Movement, these were passing phenomena, and there have also been anti-government counter-protests by the “Shia Duo’s”—referring to Amal and Hezbollah—supporters.

Moreover, most of these protests do not oppose Hezbollah per se, only insofar as it is part of the hated ruling political class or supports it.

Additionally, many anti-government protesters across the country have expressed their continued support for Hezbollah, also known as “the Resistance” and its leader Hassan Nasrallah—even after attacks by Hezbollah-affiliated thugs—asking his party to join them in opposing the current system. One anti-government protester from Jbeil, a predominantly Maronite Christian city, even called on Nasrallah to “use his weapons now, inside Lebanon, to support the Lebanese protesting here.”

It’s worth noting that neither Hezbollah’s verbal nor physical attacks have turned critical masses of Lebanese against the group. Crucially, this includes Lebanese Shias, upon whose support Hezbollah depends for its existence. Vocal opposition to the group by Lebanese Shias amidst these protests should not be underestimated. However, it was short-lived and consisted of sporadic outbursts prompted by the excitement of the current political moment, rather than a sustained or organized movement opposing the group.

Moreover, anti-Hezbollah Shias aren’t a novelty. They have made their presence felt in the past—to varying degrees of effectiveness—during the Cedar Revolution and the May 2018 parliamentary elections. Some have even emerged from within Hezbollah’s core support base, such as the October 2017 shopkeeper protests in a neighborhood of Hezbollah’s Dahiyeh stronghold, which is virtually free of protests. In 2017, Hezbollah quickly crushed the nascent uprising and forced its participants to publicly apologize. The group is repeating this pattern now.

Since no protester data exist, it’s difficult to say whether Shias vocally denouncing Hezbollah are prior opponents of the group emboldened to speak out by the current upheaval, or whether they form a critical mass of Hezbollah’s Shia supporters peeling away from the group.

Nor was this LAF intervention against Hezbollah unprecedented. For example, on September 13, 1993, and again on May 27, 2004, LAF violently suppressed Hezbollah-organized protests, even killing demonstrators, and on February 8, 2007 confiscated weapons from the group.

These prior LAF actions crossed Hezbollah’s red-lines—targeting its official demonstrations, core supporters, fighters, and weapons—unlike its current policing activity which is only targeting loosely-affiliated street thugs whose actions the party has attempted to disavow.

The October 17 uprising nonetheless had the potential to inadvertently weaken Hezbollah. It could have siphoned away its base and upended the stability provided by the current political system, which supplies the group with a fertile environment for undisturbed growth. But Hezbollah is highly adaptable and adept at survival, and has seemingly weathered the storm.

As matters stand, the group has retained its support base. It has done so by discrediting the uprising’s leadership among its core supporters—claiming it is funded by foreigner powers with ulterior motives—and successfully intimidating the broader Shia community into silence, squelching their earlier vocal dissent. Its areas are now virtually free of protests. Moreover, Hezbollah is now potentially in a stronger domestic position, since the uprising has bled its opponents, like Prime Minister Saad Hariri, of their supporters.

Hezbollah also attempted to coopt the broader uprising to prevent it from achieving its goal of overthrowing the government, but without directly clashing with the protesters and incurring their wrath. It thus deployed street thugs—not official party members—and then disavowed them, to probe public sentiment and determine how to proceed. Its official stance also backed their calls for reform, but within the current governmental structure and makeup. It wanted to preserve its ally Michel Aoun’s presidency and Hariri’s government, which—despite the latter’s official anti-Hezbollah stance—provide the group with its desired stability while being too weak to counter its growth.

Hariri’s resignation, assuming it is permanent, opens several possibilities, none of which will harm Hezbollah. Importantly, Aoun remains in power and might be able to ride out the protests. Further, whatever future government is formed could be friendlier to the group, and in any case will have more pressing matters to address than curtailing Hezbollah, and the instability that would cause.

Even exclusion from a future government isn’t fatal to Hezbollah, though it might deprive it of the political cover for its arms provided by the outgoing cabinet. The group has protected its interests from outside the government before. It did so from December 2006 to May 2008 with massive civil disobedience, culminating in an armed takeover of Beirut and governmental capitulation in the Doha Agreement.

Hezbollah isn’t threatened yet. Nor has its prestige, its wahra, receded. Were that to change, the group would escalate its responses accordingly, and one need only look to its May 2008 armed takeover of Beirut or 2011 intervention in Syria to see how far it will go to defend its existence. But, for now, the Party of God’s redlines—its large arsenal and expanding state-within-a-state—haven’t been crossed, and in the end could stand to gain from the unrest.

David Daoud is a research analyst at United Against Nuclear Iran (UANI) on Hezbollah and Lebanon. Follow him on Twitter: @DavidADaoud.

Hezbollah won’t stand down in a US-Iran conflict

On January 28, 2015, a colleague and I were driving north in Lebanon’s Bekaa Valley to report on the latest developments involving the Islamic State of Iraq and al-Shams (ISIS), which was then occupying a desolate mountain range straddling the Lebanon-Syria border. Shortly before midday, we received news that Hezbollah had just launched an ambush against an Israeli military convoy on Lebanon’s southeast border.

IRGC designation: a lost opportunity to weaken Hezbollah in Lebanon

Designating Iran’s Islamic Revolutionary Guard Corps (IRGC) as a foreign terrorist organization (FTO) stirred panic in Lebanon. Hezbollah’s allies in the Lebanese government—such as the Free Patriotic Movement (FPM) and Amal—worried they too would soon bear the brunt of American sanctions.