On February 14, 1989, Iran’s state broadcaster stopped its daily programs to broadcast a fatwa or religious edict from the Islamic Republic’s founder, Ayatollah Ruhollah Khomeini. The fatwa address called for the murder of Salman Rushdie for writing a book he never read: The Satanic Verses.

Thirty-three years later, the “arrow shot by Imam Khomeini hits home” in New York, or at least that’s how the clerical establishment in Iran sees the attempt on the life of the acclaimed British writer.

Rushdie, seventy-five, was left severely injured after being stabbed multiple times on stage at an event in New York on August 12. He is now able to breathe unaided. The perpetrator has since been identified as Hadi Matar.

Born in the United States but with roots in Lebanon, twenty-four-year-old Matar apparently sympathized with Iran’s Islamic Revolutionary Guards Corps (IRGC) and had allegedly told one Iranian hardliner months ago that he planned to kill Rushdie.

Iran has officially refused to condemn the assault on Rushdie and has blamed it on “himself and his supporters” while “categorically” denying any links to the perpetrator.

As news emerged about the attack, hardliners rushed to Twitter to gloat about Khomeini’s “execution order” for Rushdie “finally being delivered” and to speculate who among the adversaries of the Islamic Republic would be next: former US President Donald Trump or his top men, former Secretary of State Mike Pompeo or National Security advisor John Bolton (earlier in August, the US charged a member of Iran’s elite IRGC with plotting to murder Bolton).

The Islamic Republic’s propaganda machine wasted no time. Outlets controlled by the IRGC and Supreme Leader Ayatollah Ali Khamenei immediately set the tone for the country’s response to the attack.

In the early hours of August 13 in Tehran, IRGC-linked Fars News Agency republished a 2016 analysis from the official website that justified attacks on Rushdie’s life—it quoted Khamenei as saying that the “arrow fired by [his predecessor] Imam Khomeini will eventually hit home.”

Fars published the analysis with a single comment added to the top: to “succeed in diplomacy”—an apparent reference to indirect ongoing nuclear talks in Vienna—Iran should follow the example of “dealing” with Rushdie. Elaborating further, the analysis noted that Iran must “adhere to Islamic principles and not give up on them when facing international challenges.”

Hours earlier, the government-run Islamic Republic News Agency had posted a Twitter thread about Mustafa Mahmoud Mazeh, “the first martyr” who tried to kill Rushdie following the fatwa. Lebanese national Mazeh died on August 3, 1989, when a book bomb he was priming for Rushdie prematurely exploded in a London hotel.

As papers hit newsstands in Tehran, they were painted with a flurry of reactions to the attempt on Rushdie’s life.

In a front-page article titled “devil’s neck under the sword,” the government-run Iran-newspaper celebrated that Rushdie had “finally [been] attacked thirty-four years after the historical fatwa.”

The Supreme Leader’s mouthpiece, Kayhan daily, praised the assailant and wrote that “his hands should be showered with kisses.” Pointing to Rushdie sustaining neck injuries in the attack, the paper jubilantly added that his neck will “soon be cut off,” apparently hoping for a second assault.

Since Rushdie’s condition was unstable at the time, conservative daily Khorasan wrote “devil en route to hell” next to a picture of Rushdie being rushed to the hospital on a stretcher.

Taking their cue from the state media and following the Supreme Leader’s edicts, the jubilation among hardliners persistently crescendoed to new highs for three days after the attack.

At the same time, they started spinning conspiracy theories that the attack might be part of a plot by the West or Israel to derail nuclear talks.

This jubilation was not a random act of rouge elements within the Islamic Republic or isolated cases of media sensationalism.

Contrary to the narrative peddled by some western pundits—that the Islamic Republic has tried to distance itself from the 1989 fatwa—Supreme Leader Khamenei has upheld the religious edict on multiple occasions, including in 2016, 2017, and 2019.

Keyhan daily, whose editor-in-chief is appointed by Supreme Leader, justified the attack as “religious execution” and added that the West is trying to equate it with “common assassinations to prevent implementation of divine laws.”

On August 14, the influential IRGC-linked Javan daily described the attack on Salman Rushdie as “divine retribution”.

Although the paper did not even conceal its excitement —celebrating Rushdie’s “blood being splattered on the walls”— the influential paper alleged that the attack might be part of a plot to justify “violence against Muslims and Islamophobia”.

The next day the paper printed a separate article titled: “Satanic whispers from Washington against [nuclear] agreement.” It argued that US hawks are trying to derail efforts for reviving the Joint Comprehensive Plan of Action (JCPOA) using the attack on Rushdie as a pretext. It also accused the US of “spinning stories” about the IRGC plotting the assassination of top US officials, including former President Trump and his top men, Pompeo and Bolton.

It was no surprise that Holocaust denial wormed its way into the hardliners’ response to the assault on Rushdie. On August 14, editor in chief of hardline daily Khorasan wrote that the attack on Rushdie is being falsely framed as a “violent act against freedom of speech and thought” while the West “heavily punishes” people who “question or deny an incident like the Holocaust, which is abused by Zionists.”

The next day, Khorasan doubled down on its call for the international “criminalization” of offending “holy prophets,” while criticizing the West for having “double standards” by allowing “religious sanctities to be offended” while “punishing holocaust deniers.”

Although Iran’s state broadcaster’s daily, Jaam-e Jam, on August 14, dedicated its front page to a grotesque cartoon of Rushdie losing an eye in the assault and an article titled “devil’s eye was blinded,” reform-leaning outlets appeared preoccupied with the diplomatic ramifications of the attack for Iran.

Reformist daily Etemad reviewed the history of people affiliated with Rushdie being killed and maimed by Muslim fanatics, describing them as the “victims of Salman Rushdie’s [Satanic] Verses.”

The paper pointed to the attack’s “odd concurrency with JCPOA revival” and added that the West and Israel are using “bogus anti-Iranian claims” to derail nuclear talks.

Former Iranian ambassador to the United Kingdom, Jalal Sadatian told reformist Arman-e Melli daily that Israel “might have perpetrated the assassination of Salman Rushdie” and is using “its control over US media” to inflate news about the IRGC plotting to kill ex-US officials in order to derail nuclear talks.

Economic daily Donya-e Eqtesad called Rushdie an “apostate writer,” reflected “conspiracy theories” about the attack, and implied that Israel and Saudi Arabia might be behind the attack or inflating the news coverage to derail nuclear talks.

Reformists were not alone in spinning conspiracy theories about the attack. Ultraconservative Keyhan raised similar concerns in its August 15 edition.

However, on the same day, reformist commentator Ahmad Zeidabad tried to reassure his compatriots that the nuclear talks would not be affected by the attack in an article for Ham-Mihan daily. He pointed out that US officials have not linked the attack to the Iranian fatwa and added that Washington has separated the nuclear file from other issues.

Ayatollah Khomeini issued the fatwa calling for the murder of Rushdie at a time when his grip on power was slipping and his charismatic image was fading.

At home, Khomeini had been hit with the greatest “betrayal” of his political career after his heir apparent, Ayatollah Hossein Ali Montazeri, turned his back on power and openly censured Khomeini for committing the “greatest crime of the Islamic Republic,” ordering the summary execution of thousands of political prisoners, known as the 1988 massacre.

And, abroad, his grandiose campaign of “liberating [Jerusalem] after capturing Baghdad” had failed and he had been forced to “drink the chalice of poison” and concede to a United Nations-brokered peace treaty with Iraq, following eight years of a protracted war that left millions dead and maimed.

Khomeini’s successor is also facing similar challenges. The policies that Supreme Leader Khamenei has championed for three decades have pushed Iran to the brink of total economic and ecological collapse and, despite staging brutal crackdowns, the country is wallowing in social unrest. Now Khamenei appears to be cornered into giving up his nuclear ambitions and accepting a deal with the US that he loathes.

In 1989, only months away from his deathbed, Khomeini captured the raging waves of hatred against Rushdie engulfing the Muslim world. He surfed the waves to a new pinnacle of infamy only on par with the height of the 444-day Iran hostage crisis, and bolstered his power and legacy at home and abroad.

The Islamic Republic under his successor appears to be trying to surf the same waves once again. By celebrating the assault on Rushdie, the clerical establishment—this time led by Khamenei—seems to be saving face at home among ultraconservatives and abroad among people like Matar, who apparently sought an ideological anchor in Tehran. 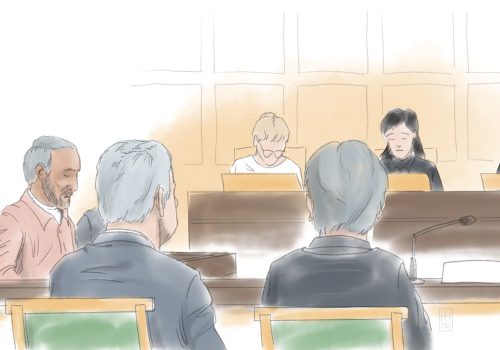 My brother was executed during the 1988 massacre. The Hamid Noury trial verdict is a victory for truth and justice.

Only the truth can heal Iran and the Iranian people’s collective pain and protect future generations from the danger of such crimes. 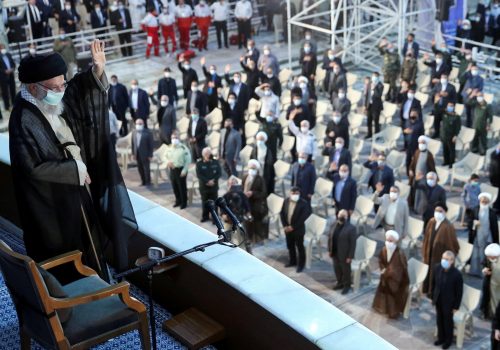 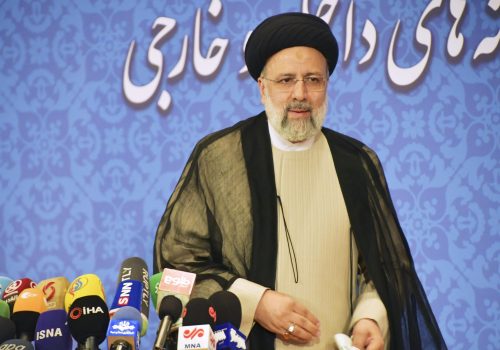 Iran’s new president has blood on his hands

Iran’s new President, Ebrahim Raisi, played a key role in the execution of some 5,000 political prisoners and was part of the “Death Commission” responsible for the 1988 massacre.

Image: An Iranian boy stands in front of a banner at the Tehran University reading "the execution verdict of Salman Rushdi will be carried out". On February 14, 1989 the religious death order referred to in the banner was issued against British author Salman Rushdie. (Reuters)