After a five-month delay, the Iranian delegation is again meeting with European, Russian, and Chinese counterparts—and indirectly with Americans—for what will be the eighth round of Vienna talks on restoring the 2015 Iran nuclear deal.

On December 9, the Atlantic Council’s Future of Iran Initiative (FOII) held a virtual public event on whether a ‘Plan B’ exists in the event the nuclear talks fail. Speakers at the event included Kelsey Davenport of the Arms Control Association, Mahsa Rouhi of the National Defense University, Sima Shine of Israel’s Institute for National Security Studies, and Sina Azodi of the Atlantic Council, moderated by FOII director, Barbara Slavin.

When the Joe Biden administration came into office in January, it was optimistic that it could revive the Joint Comprehensive Plan of Action (JCPOA)—which US President Donald Trump withdrew from in May 2018 despite Iran not violating the deal—and even produce a “longer and stronger” version. But that’s in doubt now, as the sides remain far apart. Since Iran’s conservative President Ebrahim Raisi was sworn into office this summer, Iran has accelerated its uranium enrichment to near bomb-making levels while restricting international inspectors’ access to some facilities. The International Atomic Energy Agency (IAEA) recently reported that Iran has started enriching uranium to 20 percent purity at an underground site—the Fordow Fuel Enrichment Plant—which, under the terms of the 2015 deal, is to be used only for research and development.

Having formed a new government under Prime Minister Naftali Bennett, Israel has been on a diplomatic drive to scuttle the talks while speaking openly about a military option to thwart a possible Iranian nuclear weapon. However, at the Atlantic Council event, Sima Shine stressed that diplomatic and economic tools were far preferable and suggested that the tough talk from Israeli officials had more to do with domestic politics than non-proliferation. “I think everyone will benefit from some years of quiet in order to make the situation more calm in the Middle East,” she said.

Over the past several years, Israel has pursued a policy of cyberattacks, targeted killings, and sabotage in an effort to slow Iran’s nuclear program. Tehran has responded with cyberattacks on Israel and kinetic attacks on tankers in the Persian Gulf, as well as accelerating its nuclear activities. However, in a scenario in which JCPOA talks collapse and Iran commits to pursuing a nuclear device, the situation could spiral into an all-out war or, at a minimum, see more clashes in Lebanon, Syria, and Iraq. “I think [the military option) is only a last resort,” Shine explained, “not for tomorrow or the next three months.” She listed actions such as the censure of Iran by the IAEA board of governors and additional sanctions enforcement as more likely steps, adding: “If intelligence shows that Iran is going for nuclear warheads, I don’t think anyone in Washington nor Jerusalem will be able to ignore it.”

Israel’s November 2020 assassination of key Iranian nuclear scientist, Mohsen Fakhrizadeh, caused the Iranian parliament to pass legislation requiring Iran to enrich to higher levels and restrict IAEA access. Iran has since installed advanced centrifuges and expanded its stockpiles, gaining irreversible nuclear know-how. “Iran’s breakout time is rapidly decreasing,” noted Kelsey Davenport, “This combination of increasing enrichment to twenty and then 60 percent within the past year, bringing online advanced machines, is what has really contributed to this fall in breakout time.” She said that, as of mid-November, Iran could produce enough fissile material for a single weapon in a month—a figure that would dwindle to weeks by year’s end. She emphasized that Iran would need an additional year or two to create a deliverable weapon if it made a decision to actually go for nuclear weapons.

Mahsa Rouhi said it was imperative that the world come up with “creative” solutions to convince Iran that it would materially benefit from a return to the JCPOA even if the Biden administration could not guarantee that sanctions relief would last into a subsequent administration. “They understand that [the Biden] administration cannot give guarantees for the next administration,” Rouhi explained, “so what the Iranians are thinking is what tangible benefits they can get in a three-year period.”

As Washington seeks to continue to draw down military forces in the Middle East and focus on China, a return to the JCPOA is critical for regional stability. “A deal between Iran and the United States means that you have higher prospects for stability in the Middle East,” noted Sina Azodi, “which grants more resources for the United States in its pivot to Asia.” Deadlock or outright collapse of diplomatic efforts could drag the US toward a collision course with Iran and embroil the entire region. This may explain why countries such as the United Arab Emirates, which were previously lukewarm about the JCPOA and even cheered the US withdrawal, are now seeking to improve ties with Tehran.

Masoud Mostajabi is an associate director at the Atlantic Council’s Middle East Programs. Follow him on Twitter @MMostajabi1. 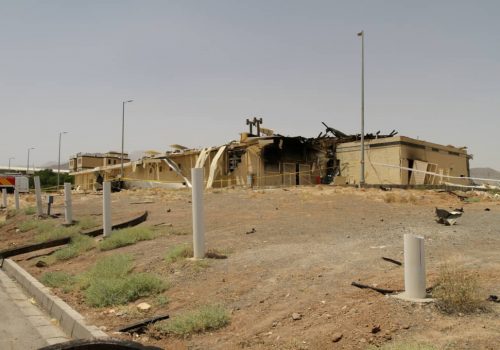