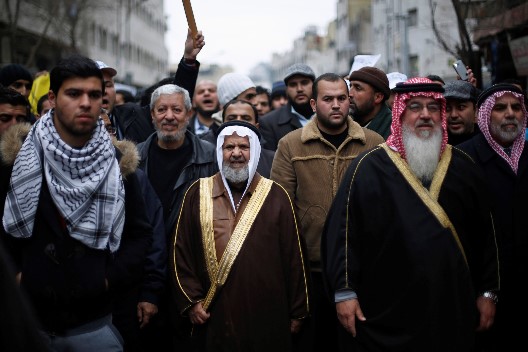 The Jordanian Muslim Brotherhood finds itself increasingly under the spotlight as it battles regional and domestic pressures aimed at significantly toning down its already quiet presence in the Kingdom. Over the past several months, the Jordanian government has increasingly applied pressure on the seventy-year-old movement that has long had a peaceful relationship with the monarchy. In fact, no other branch of the Muslim Brotherhood across the Middle East and South Asia has had such a relationship with its government, where differences of opinion never translated into a direct challenge to authority. Despite this seemingly manageable relationship between the Brotherhood and the ruling family, regional developments have placed increased pressure on the Jordanian government to tighten the noose on the movement, following in the footsteps of other Arab governments that have done so over the past two years. Yet the movement’s acceptance in Jordanian society and more immediate security concerns should make the government think twice in taking an aggressive stance toward the group.

On May 1, the Muslim Brotherhood called off a public festival celebrating the seventieth anniversary of its establishment in Jordan to avoid direct conformation with the government—days after Interior Minister General Hussein Majali said on April 24 that he would “not allow any party or organization to plan any activities or public events on Jordanian soil, at the behest of outside organizations trying to impose their agenda on the state of Jordan.” The minister’s comments allude to the government’s primary concern that the Jordanian Brotherhood is affiliated with and pledges allegiance to its ousted Egyptian counterpart. The Brotherhood’s statement calling off the celebration cited the government’s efforts to complicate the approval process and rally public opinion against the organization in an effort to “cover up the government’s failure to solve the country’s economic, social, and political crises.” The cancellation is the first consequence of an organized attempt to challenge the legitimacy of the Muslim Brotherhood movement. Although the Jordanian government has thus far resisted getting on the regional bandwagon of outlawing the movement altogether, it appears to have found a seemingly legitimate way to render the Brotherhood incapacitated.

Internal fighting within the movement over the past several years between “hawks and doves” and “reformers and traditionalists” has exposed the organization to scrutiny, magnified by the regional implications of the rise and fall of its counterparts in other “Arab Spring” countries. The decades-old organization has had to answer to a new wave of young questioning members who challenge the organization’s traditional ways. Up until last year, the government has mostly stayed out of it. The conflict within the organization, however, peaked in March 2015 when a number of recently excommunicated members of the Muslim Brotherhood claimed that the organization never legally registered with the government. They successfully registered a “new” Muslim Brotherhood with government approval. The new group used their formally registered status to attack the original Brotherhood, claiming certain factions had long monopolized the movement’s leadership and it was high time that their illegitimate ownership of the organization be stripped away.

The original Brotherhood brushed off the allegations and insisted it has been a legal non-governmental entity since the inception of modern day Jordan. While publically critical of the new organization, it continued preparations for the anniversary festival—that is, until the government pulled the plug on the annual event. When the festival organizers officially submitted the details of the anniversary celebration—a normally uneventful procedural step that informed the government of plans for a public demonstration—the government denied the request, saying the organizers had assumed the identity of a legally registered organization: the new Muslim Brotherhood. The denial was only the latest round in a series of aggressive moves against the organization. The decision came on the heels of a recent arrest and sentencing by a military court of the Deputy Head of the Muslim Brotherhood to eighteen months in jail for threatening ties with a neighboring country in a Facebook post in which he sharply criticized the United Arab Emirates for its stance on the Brotherhood.

The historic Brotherhood was trapped: moving ahead with the festival without government approval would reinforce its detractors’ view that they are a law-breaking entity seeking to sow division. Yet, canceling the celebration would capitulate to the new Brotherhood and hurt its legitimacy in the public eye. After a tense meeting with the Interior Minister to discuss the celebration, Muslim Brotherhood leaders said they took the high road to protect their members and avoid a public confrontation with security forces.

The government has effectively defanged the Islamist group with a “non-registered” status that puts into limbo its activities and, more importantly, the dozens of Islamic charities, school, hospitals, and other public services. The government now has a legal foundation on which to shut down these services and freeze the organizations assets. But doing so will undoubtedly anger the hundreds of thousands of lower- and middle-class Jordanians who rely on the Brotherhood’s longstanding charitable services. The new organization does not have the core membership support to start establishing such services anew, nor does it carry the historical legitimacy of the old Brotherhood.

While the Jordanian government has said that it does not interfere in the internal issues of the organization, its rubberstamp approval of the new organization can only be seen as an attempt to severely weaken an organization that the late King Hussein referred to as “loyal opposition.” While perhaps technically correct, claiming that the Muslim Brotherhood has no legal status is laughable in the eyes of most Jordanians. Prominent voices have emerged on independent Jordanian media outlets and on social media criticizing the government’s approach and its attempt to choke the movement into submission. In a widely shared letter addressed to Prime Minister Abdullah Ensour on social media, prominent Islamist figure Laith Shubeilat sharply criticized the attempts to divide the organization from within, citing the decade’s long support of the royal family and the unity of the Jordanian street. Shubeilat wrote that while he had long criticized the Brotherhood’s poor performance, he defended its right to exist, adding that the government was now “offering expensive public relations services free of charge to armed Islamist organizations through its dealings with the Muslim Brotherhood.” Shubeilat and others have argued that the attempt to undermine the group threatens national security, as it will push members underground and play into the hands of more violent extremists who could use the opportunity to recruit dejected members.

Although the new group, led by Abdul Majid Thuneibat, is set to convene next week with several branches of the older Brotherhood in an effort to reconcile their differences, it will be a feat for the older group to give up their hold on the movement. Empowered by the overt government support to their side, Thuneibat appears confident in what he sees as his group’s quest to put the Jordanian MB on track and protect it from the fate of its counterparts across the region. If the cancellation of the festival is any clear indication, the Jordanian government will proceed with the clamp down on the historic, original Brotherhood, in line with regional attempts to silence what has long been the most organized opposition to ruling parties. Jordan’s situation differs from others, with the organization enjoying significantly more freedom in organizing, opposing, and financing, which has forced the government to opt for indirect ways to weaken the movement. But with the Jordanian government battling the Islamic State (ISIS or ISIL) with one hand and juggling several million refugees with the other, fueling tensions with a nonthreatening domestic “opposition” is an unnecessary burden and misguided policy to pursue. For the Brotherhood, the challenge will be to address the legitimate concerns of its membership about the way it has been doing business for decades and begin to respond democratically to internal calls for change.

Tuqa Nusairat is an Associate Director at the Atlantic Council’s Rafik Hariri Center for the Middle East.