Organizers are racing against time to finalize preparations for the 2022 United Nations Framework Convention on Climate Change (UNFCCC), better known as COP27, which convenes in the Egyptian Red Sea resort of Sharm el Sheikh from November 6 to 18. More than 35,000 participants and leaders have registered for the event—the world’s largest annual gathering on climate action.

But skeptics are questioning Egypt’s leadership of the climate talks, citing human rights concerns and unideal environmental policies. Others are doubtful about the choice of Sharm el Sheikh as the host city. They argue that the holiday resort may not be the most suitable venue for a global conference of this magnitude and scale, given the logistical, organizational, and managerial challenges of hosting such a gathering.

Nevertheless, the opportunity to host COP27 has incentivized Cairo to take steps forward in regard to climate adaptation and human rights, even if a lot more needs to be done to show that authorities are serious about political and environmental reforms. Meanwhile, continued financial and moral support from the United States and other development partners—and further scrutiny of human rights violations committed—would ensure there’s no backtracking on the country’s progress in the past year.

Egypt as a host

In anticipation of the convention, Sharm el Sheikh has gotten a facelift: hotels have undergone renovation; a new bridge (for easy access to the conference center) and solar power stations have been constructed; and even electric car charging points are being installed to cater to the new fleet of nearly three hundred gas and electric buses, which will ferry guests to and from the conference center through tree-lined streets.

Egypt’s leadership is looking to the rich, industrialized countries mainly responsible for climate change to foot the bill for anticipated climate disasters that will wreak havoc in developing countries. Securing finance for developing countries’ climate adaptation efforts would allow Egypt to position itself as Africa’s leader on climate action—a vote of confidence Cairo badly needs as the populous North African country grapples with high inflation, a growing budget deficit, and a shortage in foreign currency reserves that some analysts warn may spark a new uprising.

But COP27 has been shrouded in controversy among environmental campaigners and rights groups. For one, Egypt started off on the wrong footing by choosing Coca-Cola—one of the world’s leading plastic polluters, according to Break Free From Plastic—to sponsor the climate summit. The decision raised eyebrows among activists and commentators, who called it a “greenwashing” exercise.

The selection of Egypt as host has put the country under renewed international scrutiny, drawing attention to its environmental policies that some critics lament are “not a model to showcase.”

Egypt’s heavy reliance on hydrocarbon-based fossil fuels continues to be a bone of contention with climate activists, who accuse the country of dragging its feet on reducing its carbon emissions. Egypt’s first Nationally Determined Contribution (NDC)—a voluntary plan defining the country’s commitment to lower its emissions—was submitted in 2020—more than a year after Egypt ratified the Paris Climate Agreement—and has been slammed by some activists and commentators as “too general” and void of clear plans to reduce its greenhouse gas emissions (an updated NDC with significant improvements was submitted in July, showing commitment by Egypt to cut its emissions by 33 percent by 2030).

The government has also come under fire for its “systematic destruction” of green spaces; particularly, the cutting of trees in some of Cairo’s public parks to make room for parking spots and cafeterias in the name of development. This has occurred despite protests by activists on social media and warnings by environmentalists that, even in best case scenarios, rising sea levels will inundate parts of Alexandria, Port Said, and Nile Delta areas closest to the Mediterranean, potentially displacing millions of people and causing severe water shortages and massive food security challenges.

Critics also accuse the Egyptian government of a lack of transparency and of keeping citizens in the dark about the inevitable consequences of climate change. Environmental activists have been among those targeted in the ongoing security crackdown on dissent since 2014. Ahmed Amasha, an environmental rights defender, was arrested in 2017 and reportedly raped and electrocuted while in prison. He was released in 2019 only to be re-arrested the following year and continues to languish behind bars.

Meanwhile, independent civil society organizations critical of the government complain that they have been shut out of the COP27 summit, owing to what they describe as a “selective” registration process that filtered them out to ensure that only pro-government non-governmental organizations could apply. The move is meant to curb protests, including peaceful demonstrations, traditionally staged at previous climate summits. Authorities have said that they would only allow pre-registered protests to take place and that they would be confined to a designated protest area.

Not surprisingly, Egypt’s dismal human rights record and the leadership’s iron-fist rule is the biggest concern for those opposing Egypt’s hosting of the climate talks. Rights groups argue that the imprisonment of tens of thousands of political prisoners, enforced disappearances, and torture in prisons, as well as the dwindling space for freedom of expression and freedom of speech, do not make for a conducive atmosphere in which to hold the summit. Amid the unprecedented crackdown on human rights and civil society, the Working Group on Egypt, a bipartisan group of foreign affairs experts and other rights organizations, have urged the Joe Biden administration not to lend its support to the COP27 hosts so as not to whitewash the regime’s repressive policies.

To the dismay of the rights groups, Biden has turned a deaf ear to the calls. The American president is among ninety heads of state that have confirmed their attendance. John Kerry, the US Special Presidential Envoy on Climate, who has visited Egypt twice this year, has been coordinating with the president designate of COP27 to iron out last-minute details of an agreement—to be announced during the conference—to support Egypt’s National Nexus of Water, Food and Energy (NWFE), an initiative launched in September to promote green projects and climate-friendly schemes.

While the planned deal may come as a disappointment to the activists who had hoped Biden would live up to his election promise of “No more blank checks for Egypt’s dictator,” the Biden administration has not entirely turned a blind eye to the Egyptian regime’s rights abuses. In mid-September, the United States announced it would withhold $130 million in military aid to Egypt over its failure to fulfill improved human rights conditions. A remaining $270 million was allowed to go through owing to what US Secretary of State Antony Blinken described as “progress” made by Cairo on political detainees.

Indeed, there’s been a noticeable easing of the security crackdown in recent months, with hundreds of political prisoners released ahead of COP27. The releases were overseen by a presidential pardon committee, reactivated in April on directives from President Sisi. While rights activists dismiss the move as merely cosmetic and say that the number of those released is but a drop in the ocean compared to the tens of thousands languishing behind bars, it is still a welcome step in the right direction. It also shows that Biden’s carrot-and-stick approach vis-a-vis its Middle Eastern ally may be bearing fruit.

Egypt has also made progress towards mitigating and adapting to climate change by constructing desalination plants and flood prevention infrastructure and increasing solar and wind energy capacity. It is also the first country in the Middle East and North Africa to issue green bonds to finance green projects. While Egypt has yet to reduce its dependence on fossil fuels, it has made marked progress in diversifying its energy sources; the construction of wind and solar farms in strategic locations across Egypt is catalyzing the country’s transition to clean energy. Furthermore, there are plans to increase renewable power capacity by 68 percent or 4 GW in the next five years and to 13.7 GW by 2030.

To achieve its ambitious goal, Egypt has signed several agreements with international development partners, including a Mediterranean Hydrogen Partnership launched with the European Union in April to promote investments in renewable energy generation. The new partnership also focuses on the strengthening and extension of electricity grids, including trans-Mediterranean interconnectors and the production of renewables and low-carbon hydrogen.

While the Biden administration’s approach—using a combination of reward and punishment—appears to be working, Cairo needs to keep the momentum going and show that it is actually committed to continuing the progress made so far. To do this, it needs to speed up its green transition, taking steady and concrete steps to lower its emissions and shift towards renewables; thus, fulfilling the pledges spelt out in its updated NDC and National Climate Strategy. Moreover, Cairo needs to free all political detainees, many of whom are imprisoned for nothing more than exercising their right to free speech and free expression. By doing so, it can expect to reap the rewards of its serious efforts: greater support from the international community and prosperity and stability for Egypt and all Egyptians. 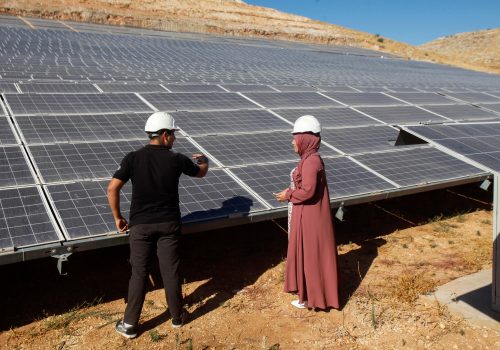 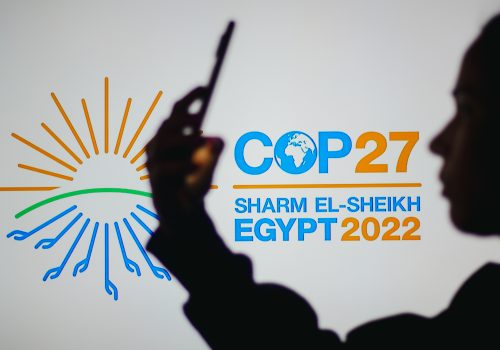 Egypt is hosting COP27. What are the expectations?

As the host country for the 2022 United Nations Climate Change Conference, Egypt has a huge role to play during its presidency of the event, as all eyes will be geared towards how the country can lead by example. 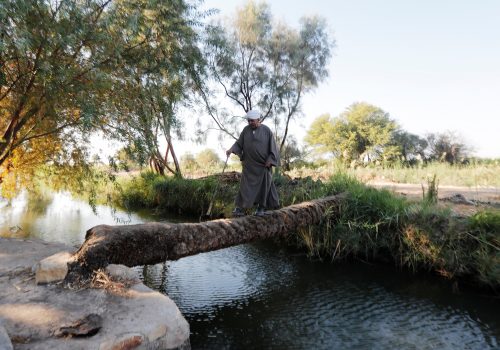 Image: A worker cleans solar cells on a rooftop of a hotel in the resort town of Sharm el-Sheikh, the first to operate a solar-powered plant in a bid to turn to clean energy as the city prepares to host the upcoming COP27 summit in November, in Sharm el-Sheikh, Egypt, June 4, 2022. Picture taken June 4, 2022. REUTERS/Mohamed Abd El Ghany